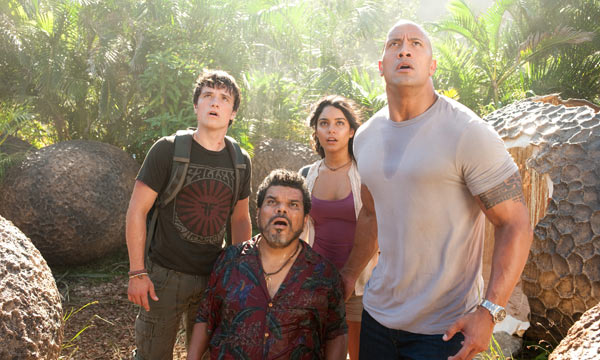 Perhaps one of the things that works best about Journey 2: The Mysterious Island if that it gives you sort of a non-sequel/quickstart. The concept of the film is introduced quickly and simply and before you know it we’re on the beginning of the quest. It’s a film that knows it’ll be plot-driven so it gets right down to it.

That being said there are a few character and dialogue issues that come into play right away. They don’t rear their ugly heads too often but they do hold the film back a little bit. In the first scene things are going swimmingly and then Sean (Josh Hutcherson) sees longitude and latitude coordinates and doesn’t know what they are though it’s already established he’s a straight-A student. There are also perhaps too many attempts to make certain plot elements seem plausible with lengthy explanations. The elements are well thought out but the dialogue is somewhat clumsy and didactic.

To address the only other bugaboo quickly there’s also the unnecessary complication of gold in this film also, a bit like the latest Chipmunks movie. It’s such and antiquated and tired cinematic motif, and hard to swallow in a life or death situation.

Journey to the Center of the Earth was a precursor to the 3D renaissance and it was very good and took advantage of the technology. This film may not be up to that standard , partially based on other production decisions, but it is good and utilized 3D that’s worth the up-charge for sure.

The cast in this film is quite good and keeps the tone light and fun and makes up for any inadequacies the film may have. Josh Hutcherson is clearly the lead, while he’s always been a great talent, here he really shows he’s already a movie star by carrying an action vehicle with some heavy-hitters. That being said Dwayne Johnson does well here with his usual good delivery of humorous one-liners he also works well with Michael Caine who effortlessly adds a nutty adventurousness to the film. Luis Guzmán, who has been hilarious in countless things gets a much bigger part and stage upon which he can shine.

The movie keeps the laughs consistent, which keeps the tone fitting with the prior installment. This means that this film will earn new fans and please old ones in equal measure.

The CG on screen is better than TV and trailers can really give you a sense of and the action sequences are pretty good. They work especially well with the good 3D.

This is a real fun and funny follow up to the prior film that made it worth the wait.