Forrest Gump is a film that defies the conventions of filmmaking, and in that sense it is difficult to do a typical analysis of the film. It’s not so much that the film is overly complicated or that reality is always in question or any art house tricks of that kind; it’s just that Gump doesn’t really follow any rules.
We begin with the most obvious: the plot. This is a film that should have redefined the biopic. It is completely about the life and times of Forrest, the protagonist, in fact through it all that’s the only thing it’s consistently about. Other films that tell the story of a person’s life are usually focused on one section of a person’s life, even cradle-to-grave biopics usually hinge on some narrative fulcrum. This film, however, makes no pretensions of having a conventional plot, and in this regard it surpasses even Citizen Kane in the biopic subgenre. Whereas in Kane there is a pretense to find out about Charles Foster Kane, and the search for the meaning of Rosebud, in Gump all we get is Forrest telling us his life story. Story for story’s sake, it’s a beautiful thing. In this sense we also get filmmakers playing with time in an interesting way. For the first two hours of the film we are told what has happened in Forrest’s life up until this point. Then, suddenly, for the last part of the film (about 14 minutes) we see things as they happen from then. While the frame of the narrative is built on a flimsy premise it’s still a very interestingly constructed film.
In many ways Gump’s tale becomes that of America. We follow his adulthood from Vietnam to the Reagan years and the beginning of the AIDS epidemic, and through this time he stumbles from one historical moment to another. This is one of the problematic things about the film to some: Forrest is always able to make it through these hardships with his head held high. It also practically condemns all political assassinations and the Vietnam War and it can be seen as a very liberal film, and if someone wants to dislike it for that it’s a better argument than not being able to connect with it because of Forrest’s intellectual incapacity. The latter statement is something that is virtually countermanded throughout. 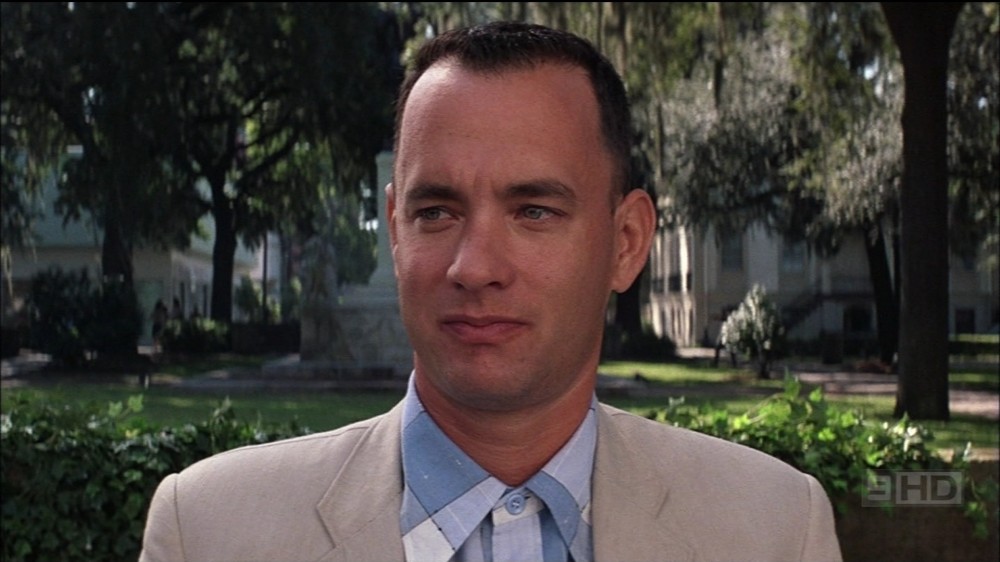 When looking at the characters in Forrest Gump one must first look at the film’s name sake. In listening to the DVD’s commentary track Robert Zebecks stated that Forrest is a man of less than average intelligence who “Never made a wrong decision as a man.” They made a point of showing this explicitly when his principal showed him that his IQ was only slightly below the acceptable level.
The catch-phrase “Stupid is as stupid does,” has been misinterpreted by many. This phrase defines Forrest in that he’s not stupid because he’s never really done anything wrong. Whether Jenny was being harassed as a nude guitarist or abused by her counterculture boyfriend, Wesley, Forrest was always there to protect her. Forrest picked up a notebook dropped by the first black student at the University of Alabama. In Vietnam he ran back and saved as many members of his platoon as he could from certain death never considering his own safety for a minute. Yet while showing noble qualities as a man Forrest still shows himself to be childlike in many ways he has always listened to mother’s advice (e.g. endorsing a ping pong paddle), feels shy and embarrassed when Jenny makes a romantic advance toward him, and has the same physical mannerisms as his son while watching TV and fishing. Another place in which Forrest’s character is used for commentary is when he says he fits in like “a round peg” in the military. Why is that? It’s because he’s a man who has never really thought for himself and always obeys orders. When Forrest meets Lieutenant Dan we see that he takes all questions seriously and doesn’t have the intelligence to be mean, cruel or condescending and in that sense he is an endearing figure. This quality of taking everything at face value is what allows him to moon President Johnson without a bit of malice. This quality of his character also provides the film with some of its best dialogue. Here’s an example:

LT. DAN
Have you found Jesus yet, Gump?

FORREST
I didn’t know I was supposed to be looking for him, Sir.

Forrest is also honest and a man of his word. His honesty leads him to be the whistleblower on the Watergate scandal. He also kept his promise to Bubba and compensates his mother with a huge check. Forrest’s one moment of defiance is when Jenny has come back to live with him and he confronts her about why she won’t be with him, and he delivers another wise and knowledgeable line. This one being: “I may not be a smart man…but I know what love is.” Forrest then needed time to think and to himself. After all the hectic moments in his life that is the reason he decided to run.

Jenny is a character plagued by her past. Her life has always been turbulent and she has always been turbulent and has always turned to Forrest when things got too crazy for her to be able to deal with. She left home and went to an all girls college. She was expelled and then became a hippie, then she reunited with Forrest in Washington. At this point she was with Wesley who palled around with the Black Panthers. Later she got into the Disco/drug scene. Jenny is a much tougher character for a general audience to figure out because we see her in flashes and hear things about her in dialogue and her motivations get clouded but they’re real. In the end, Jenny comes back home because she is tired. She has gone all over the country looking for an identity and she is able to come home because the problems she was running from wasn’t the little town she grew up in but what had happened there. These were the events in her life that lead her to spiral downwards and almost pushed her over the edge. Jenny had wanted to be a folk singer to connect to people but Forrest was the only person she could ever talk to whom would never judge her.

Lieutenant Dan carries us through most of the second half of the film alongside Forrest. There is a lot of turbulence in his life after Vietnam. We’re introduced to him in one of two brilliant “Generational Flashes” where we see his forefathers dying in major American wars. He feels this is his destiny and because Forrest took him away from that he dives into alcoholism and deep depression. Nonetheless he defends Forrest against the prostitutes who call him stupid and lives up to his promise to work with Forrest on a shrimp boat. Lieutenant Dan starts to feel about things after a violent storm where he is able to vent all his anger about what has been going on. After indirectly thanking Forrest he vanishes from the film until he returns with a Vietnamese wife and titanium-alloy legs.

Mama is played by Sally Field. That says it all doesn’t it? She is given no proper name aside from being referred to as Missus Gump on occasion. If it wasn’t by design it should’ve been. That’s what she is: Forrest’s mother. No one has a perfect mother, but Forrest undoubtedly had the right one, like Forrest says “Mama, always had a way of explaining things so I can understand them.”

Little Forrest is worth mentioning because with Hollywood being the way it is, I can just see producers counting down to the day when they can start shooting a sequel. Now, this wouldn’t be a bad idea initiated by Hollywood, but would just be followed through by them. After Forrest Gump’s astounding success, as it was in development almost since it was originally published in 1983, novelist Winston Groom published a sequel, Gump & Co. Like the original it is “plotless” but the major concerns are about Forrest and his son as he wanders through adolescence. I don’t know if Robert Zemeckis was joking but on the DVD he repeats the same comment twice: “In case we ever do a sequel Haley’s a big star now, so that’s good.” The book is often amusing but the relationship borders on combative and they should follow the lesson that the makers of The Evening Star learned, which is even when the book has a sequel you’ve got a tough act to follow.

Forrest Gump was also groundbreaking for its use of special effects. It’s appreciated that the effects are used when there are many effects for something that is not an action or Sci-Fi film. Through the effects the filmmakers were able to make many historical figures into characters: Nathan Bedford Forrest, Civil War Lieutenant General and KKK member, a distant relative of Forrest’s who illustrates we needn’t be prisoners of our past. We also see Elvis, John Lennon, JFK, George Wallace, Lyndon Johnson, RFK, and Nixon, all in a somewhat exaggerated fashion but still reflecting the way the public perceives them. Thus, turning them into participants in this story and lending them to Forrest’s own simple interpretation of things, which ends up being oh so truthful. For everyone who was either killed or had an assassination attempt on them Forrest comments in passing “And for no particular reason at all someone shot him.” He made these comments in reference to JFK, RFK, George Wallace, and John Lennon. Yet in other instances news of an assassination attempt was used to indicate to the audience what the present date was without using an annoying insert. We see flashes of attempts on Ford and news of what Carter was saying while Forrest eating a bowl of cereal, and while Jenny was living with him Reagan was shot. At this time only in The Tin Drum had i seen more subtle passage of time, and it does wonders for not slowing the film down.We always have a general idea that something is happening but needn’t be told the exact date, time, and place.

The dialogue in Forrest Gump is often exemplary and I’ve already listed some examples. The first great line to come out of the movie is one that’s simple and really demonstrates what Forrest’s mother is all about “If God had intended us all to be the same, we’d all have braces on our legs.” Many of the great lines became great due to the editing of sound and film alike. An example of good film editing is when Forrest’s mother tells him that “You’re not different.” Then it cuts to the principal saying “The boy’s different, Mrs. Gump.” We get a lot of comedy out of Hanks’ voice-overs in which he often says something and then we see it happen in the scene. The best example came in Vietnam. It goes like this:

FORREST (V.O.)
…he’d always tell us to get down and shut up.

The use of ironic voice over is a product of the editing because Zemeckis knew the amount of voice over work was risky. It was truly a hit-and-miss thing so it was one of the last things added to the film. It was basically placed where they knew the results would be favorable so it worked perfectly.

A unique thing about this film is that it doesn’t seem to have much conflict in it at all. When there is conflict there isn’t a whole lot of focus put on it. Yet is still ends up working better than a lot of films that focus too much on their conflict and never give the audience a breather.
Forrest Gump isn’t a film that can be duplicated. It stands alone as a modern-day classic of American cinema.