Masters of Horror: Pick Me Up 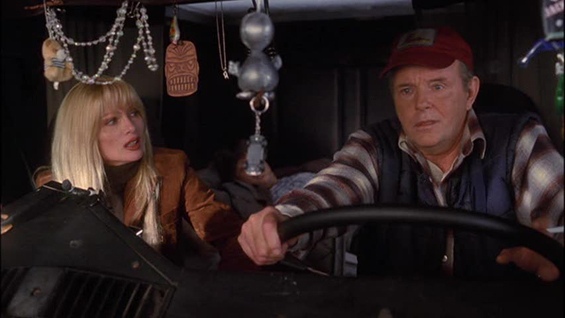 Michael Moriarty in Pick Me Up (Starz Productions)

In this series of films I have already chronicled both films in the Masters of Horror series and Larry Cohen, in The Stuff. However, this film is a little different for both parties which is part of the point of starting this series was to find, or reveal, works in the horror genre that are worth profiling.

What separates this film is that it truly does focus on the antagonist more than the protagonist and what’s more is it concerns itself with a cruel twist of fate in which there are two psychopaths covering the same area.

While this film does have Cohen’s typical blend of humor the production values are way up from their usual standard and furthermore it does get pretty darn creepy more than once as this unique scenario is allowed to be investigated almost to its fullest. Aiding in that journey is the fact that the screenplay has been adapted by the author of the short story David J. Schow.

The film is further elevated by the fact that it features yet another brilliant performance by Michael Moriarty, a Cohen regular, who always seems to be a completely different character.

What makes it compelling is not only do you realize early on that these two characters are on a collision course but when they meet you even wonder if they are working in tandem. When you find they are not it still remains interesting as you hear the differing philosophies behind their psychoses. Yet even with all that there is a twist in store that catches you, which is all the more surprising.

Of all those in the series I’ve seen this is the one I’d put at the top of the list for the conventional horror fan to see first. If you’re familiar with Argento obviously see Jenifer but this is likely the most accessible and successful title to date.