Peace, Love & Misunderstanding has a simple enough set-up: in the very first scene a husband (Kyle McLaughlin) asks his wife, Diane (Catherine Keener), seemingly out of nowhere for a divorce. The second scene is the dinner party they were planning for and he seems his normal petulant, pedantic, socialite self and she’s affected. While the legalities are being straightened she decides to take her kids; college-aged Zoe (Elizabeth Olsen) and high school student Jake (Nat Wolff) to Woodstock to stay with her long-estranged mother. As they stay their the difficulties of reuniting and illustrations of why Diane left become readily apparent.

So the foil is established early inasmuch as you have in this tale a hippie mother (Jane Fonda), who still very much embodies that lifestyle and a conservative, attorney daughter. The film does well to arc a majority of its characters. This film is a bit like Boy because it’s not so much about all of its characters changing, but more about accepting your family for what it is. Fonda’s character won’t change, as adventurous as Diane gets on the odd occasion she fundamentally will not either, it’s really a progression of learning to accept and live and let live on the other side of the mother-daughter relationship. Zoe is an interestingly drawn character; seeing as how she’s a college student she is open-minded and politically aware, at least in theory, but meets people who challenge her preconceived notions in a very creative way. She is at a crossroads more than once in the film, and must decide if she’ll be more laissez-faire or more rigid, seeing as how she’s torn. Then there’s Jake who is perhaps the most deftly written character because he is awkward around girls he likes, tells mostly inappropriate jokes with his sister and takes his documentarian ethos wherever he goes (and sometimes makes mistakes in that regard). However, it is he that makes the most incisive observations in the film but he doesn’t express them verbally.

He expresses them through his free form poetic short film that debuts at a short film festival in the story. We see the entirety of the film and many of the scenes are spliced back creatively in juxtapositions that seem apropos of nothing when looking at just one pair of joined images, but as a whole the short serves to illustrate that in spite of the lunacy and at times chaos that transpired between the family members during their time away it was evident all the way there was affection amongst all members of the family there was just difficulty in expressing it.

So while having a few characters not fundamentally change, at least not yet, makes the rendering of drama a bit more difficult the relationships do work as a whole. What was not even a family per se before this film started; now is one. While the nuclear family fractures, the extended family starts to re-solidify and working a number of characters together, leaving them at peace with one another is something and quite true: their may be a truce but each individual will still have his or her own baggage. 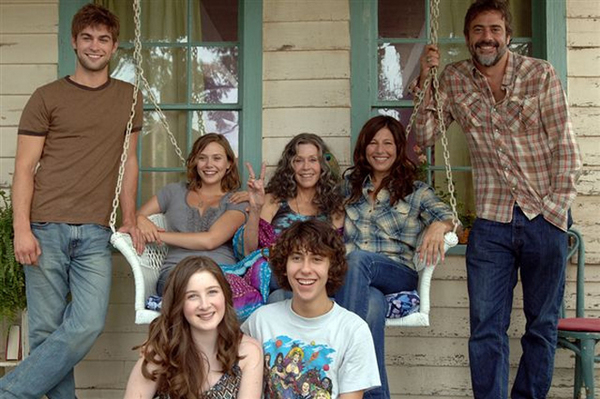 The progressions aren’t instant, or in a bee-line, a bit like reality it’s two steps forward and one step back. However, there are gaps being bridged throughout the course of the film.

Of course, these relational dynamic would hold no interest, and would not be allowed to build as they do, if it were not for the performers inhabiting the roles. If the actors inhabiting these parts are not sufficiently interesting then the struggles they’re in will not be either, and each player in this film excels in their part. Jane Fonda has been infrequently on the big screen in the past few years, alas this is a role and a narrative truly worthy of her talents and she truly shines in the film. For her part Keener seems a bit too perfectly suited but she does do well and plays brilliantly off of Fonda, which is half the battle. It’s not Elizabeth Olsen’s best role, partially due to her screen time, but there are no small roles and having an actor so gifted in a supporting part is truly a blessing for any film. The male performers in this film for the most part take a backseat to the ladies, which is rare but that is not to say they are insignificant. I discussed Jake’s character above but the interpretation by Nat Wolff is quite natural and adept. Some young actors don’t have the reflexivity to play the inherent awkwardness of certain situations that come with the teen years for whatever reason be it range, their type, direction. Yet, everything he does works whether it be his flippant innuendos, self-deprecating humor, aloof artist mode or being painfully shy around a girl. Jeffrey Dean Morgan has a charm and confidence that is just enough to be very convincing as the free spirit who could get to someone like Diane. Some actors, or some other casting decisions, might place too strong a personality opposite here. He is winning but subtly so, not forcefully persuasive, which makes him harder for Diane to resist. Now, Chace Crawford does have to be an equal to Zoe as Cole, for nothing else would be so disconcerting to Zoe as someone who not only challenges her beliefs, but is as strong a personality as she is; and he succeeds most easily.

Peace, Love and Misunderstanding is most definitely a character study. However, it’s not a talking heads drama. There is visual interest and the short film does add some artistry in the edit. It’s a film that will have you think on it a bit and the kind that got a little better as I wrote this. It’s definitely worth a shot.