What we have here is a most unique and historic occasion! This is not only the first guest post ever on this blog, but it is also a bi-lingual post. My cousin Rodrigo Guéron on Facebook posted a brilliant essay about Django Unchained . I thought it was great and asked him if he’d mind my translating it. So below you will find not only my translation of the text, but also beneath it, for those of you who speak Portuguese and would prefer the original text, I have included that as well. Enjoy!

Quentin Tarantino’s Django Unchained: How Good it is to Kill Fascists, Racists and Slave Owners!

Philosopher. Adjunct professor Art Institute of UERJ (Universidade do Estado do Rio de Janeiro). Author of the book From the Image to the Cliche, from the Cliche to the image: Deleuze, Cinema and Thought. Director and Screenwriter of the short films 750 Cidade de Deus (750 City of God), Cladestinidade (Clandestineness) and Eu Estou Cada Vez Melhor (I’m Always Getting Better).

Funny, I was never a Tarantinophile. My mind wasn’t blown, in the ’90s, like some of my friends, by Pulp Fiction; I liked the movie, certain scenes and images especially, but that’s it. Truth be told I really liked a movie that the cultists of the director consider minor: Jackie Brown. Then along came Kill Bill, that I thought was very interesting, and I disagreed with what most critics said about the film, namely, that this, and Taratino’s films that followed, were a collage of references, a montage of cinematic citation, sketches and pop cliches: pastiche couture. That wasn’t exactly an untruth, but it was understating these films. Similar things have been said about Django Unchained, and I continue to think that in a way the critique of Tarantino’s cinema isn’t giving him enough credit.

From the beginning, I would say that Tarantino fights and confronts the US’s past and images of America’s past (Or better yet the past relative to imagery), not differentiating, as in Godard’s Notre Musique, if the image portends to be documentary or fiction: they deal with the memories in the collective consciousness that they’re created from, above all else a memory with a present to be dealt with. To begin such a story, we’d think that the first images of the film we’d face would be of blacks in the bonds of slavery. As a matter of fact, they are there, but it has a void too, a void of imagery, a shrieking omission, specifically a counter-image. In the American cinema, and in history, slavery appears through racism, the abscess of Anglo-Saxon Hollywood. Through its absence, for lack of a protagonist, or through the stereotyping of blacks in films and, finally, that these re-affirming constructs act as images of resistance, like exuberance and empowerment, become stereotypes themselves. But the remixed past of Django Unchained goes well beyond these images: the great, epic images of “America” that are present. And in that it makes sense to mix westerns and slavery: a combination that almost never occurred is, at the heart of it, a combination that was always latent, as if Saturation and Omission met each other on the corner of History and Cinema.

It’s clear that, it’s so impossible to make a western today, it’s so impossible to believe anew in those old epic fables (save the exceptionally beautiful No Country for Old Men by the Cohen Brothers which displays that, nearly debunking my statement) as impossible to not consider the epic majesticness, the power of the images of these civilizing fables mix cinematographic beauty (the beauty of life and the world, and not the dark underbelly of cinema) with sanguinary violence of all the conflicts and genocides of Manifest Destiny. In the middle of the impasse created by this heritage, it’s as if a space was opened up by kicking and screaming to create the images that Tarantino invents in Django, an impossible black cowboy, ex-slave, freedom fighter, bounty hunter, fighting against his captors to free his lady fair. 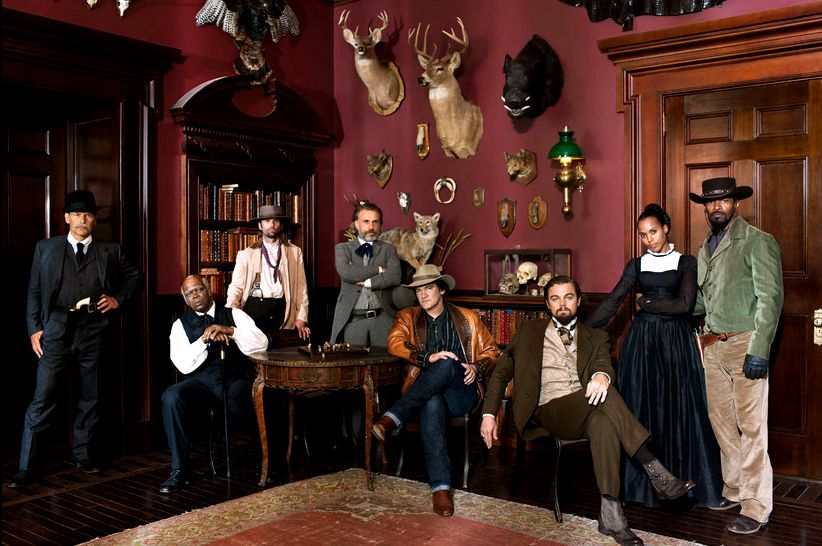 But it’s so impossible to believe in a cowboy the way we used to, that one who is black politically correct, didactic, militant of liberal America, would be ridiculous and absurd. On the other hand, if Tarantino made his film a simple parody, or just a comedy, (as the great Spike Lee equivocally interepreted), it’d have eschewed violence in a cynical and impotent way. At the end of the day, cinema is violence, cinema is war, they’re as inextricable from one another as history and violence; whether it be the banalized violence of imagery or a violence of the banal in images; whether it be the aesthetically beautiful violence, sometimes cold and ascetic, sometimes redemptive (for a “great cause”) and, finally, a fascinating violence, attractive: a violence with the promise of great fun and pleasure.

And that’s not all, the situations in westerns are so impossible, so ridiculous, but at the same time are a past that happened, it’s almost irrelevant if it was in cinema or in fact. From old movies there are some images fascinate me to this day: fearless men, sagas, sublime landscapes. Aside from the obvious, the cowboy is at the same time a child, an innocent, sensitive and sanguinary. A heroic nomad, he comes last, does dirty jobs for others before himself, he’s also, violently civilized: the vagabond cowboy is a freedom fighter before “America” becomes the the United States of America. And in the United States film itself is, like a cowboy’s tale, a westerly march.

Tarantino creates in this black cowboy nothing credible, a fearless freedom fighter who’s enamored, who confronts a past, which is invariably tragic. In a mishmash of cinema and history, history and cinema, he duplicates images ad infinitum, showing us all its sides. Sometimes in just one movement, as times in frenetic comings-and-goings, he destroys the past as well as he salvages it. It even gives the impression that one of his filmmaking guides was the most beautiful anti-fascist text by Nietzsche (A philosopher who was, paradoxically or not, a hero to the Nazis): On the Use and Abuse of History for Life.

At the intersection between Memory and Forgetting, between what we can’t relive and what is impossible (and undignified) to forget; between what we can no longer believe and what we wish to affirm; between cynicism and innocence; between raw, real violence and film effects; between the pretension of realism mixed with moral lessons and the ridiculousness of improbable situations; Tarantino chooses all this at the same time. We make fun of, laugh at, disbelieve, and surprisingly, we are on the edge of our seats like adolescents from the mid-20th century rooting for their heroes. And this is how we find ourselves getting frightened, nearing delirium like beasts before a huge massacre: a “just” massacre, the perfect revenge: a copy of a copy of a copy, but totally anti-Baudardrillian, posing as not at all nihilistic: potent. And the whole theatre is buzzing like when the young Jewish girl in Inglourious Basterds, in the middle of Occupied Paris, blew up the theatre with Hitler, Goebbels, Goering and the whole Third Reich in attendance. It’s an absurdity that’s good: the deliciousness of cinema unmasked, rustic, stripped of dramatic recourses and moribund cinematic technique, mixing the deliciousness of seeing how history absurdly should have been for the general welfare of all. In fact, if cinema is a fallacy, science and its “truths” can be the same way: certain situations in the film are so stupid like the “scientific” explanation that a slave owner gives about the brian of blacks. But their power is also maintained because it’s fascinating and engenders pleasures. Cinema and its joys have much to do with this. This is why the scene where the slaves are setting the table in the plantation house is perhaps one of the most beautiful of the film.

Hollywood always wanted to give us the omnipotent sensation of the desctruction of evil; for this it was necessary to drown under the polarization of good vs. evil to later get rid of all our desires – and above all the anti-desire: fear and guilt- within it. Only Hollywood isn’t over our heads: it is part of the power, either with active violence, or with the impotence of fear and guilt: impotent images. The “politically incorrect” relates to these things, and it’s still capable of turning, with its spectre, a legion of proto-fascist figures of the establishment posing as the irreverent “politically incorrect.”

On the other side, if the American cinema doesn’t get tired of killing for a great cause, or of promising an assassination with a great fun – and us with heroic assassins- Tarantino in Django permits us to to play joyfully at being just, saying “Fuck off!”, to our delight, to everything politically correct. Now we can even laugh, celebrate and get as blood-spattered as we want with the triumph of good we always wanted: the best happy endings of all time.

The omnipotent American cinema of destruction of evil is triumphanty destroyed and resuscitated by Tarantino, who in the same gunsling kills liberal-Christian guilt with a bullet to the head. It’s not good enough anymore to kill “robbers,” “Indians,” “Communists,” “Islamic terrorists,” or all the other supposed enemies of “America.” Much less feel compassion for them. What’s good is killing fascists! What’s really good is slaughtering slave owners and racists! It delicious to see these pigs to the slaughter without any pity whatsoever. 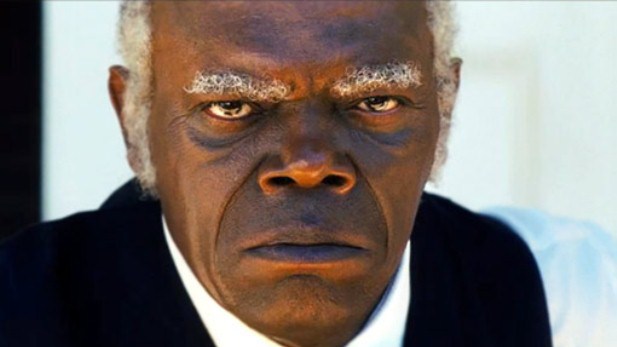 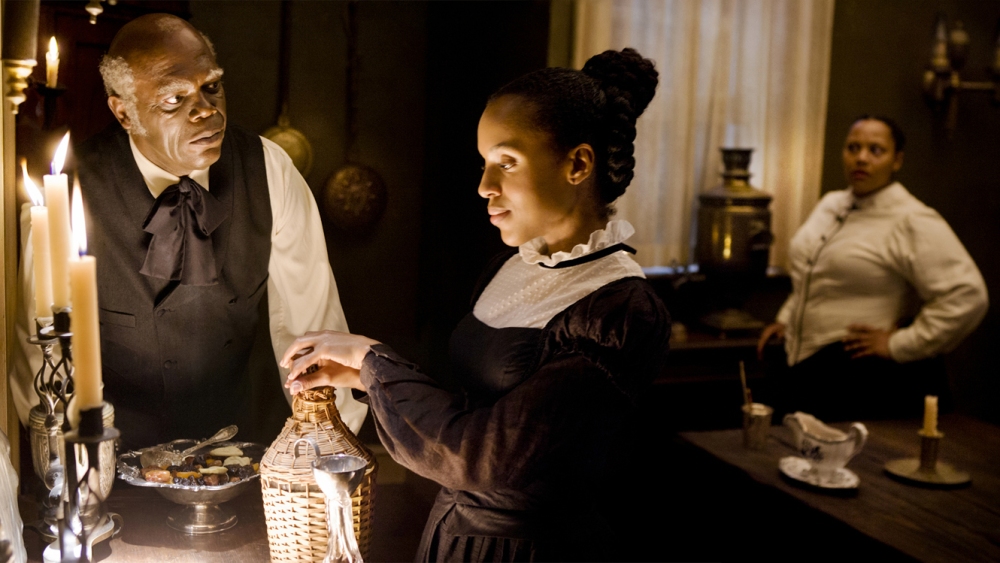