Firstly, I’m glad to be contributing to Comet Over Hollywood and Lindsay’s Movie Musings blogathon. Secondly, I have to say that there are two very distinctive reasons why I chose these films for analysis: one, I am currently ensconced in my 61 Days of Halloween theme so anything that could combine that with a blogathon was preferred. Two, I firmly believe that while all films may not reach “greatness” or “importance” they are all worth being looked at seriously. Analyzing a particular aspect of these films made it easier. Yes, I said films twice now. That’s the last note I should mention: I thought Doctor X was on YouTube. I was mistaken, but it was on Netflix on a two-film disc with a later, similar but unconnected film so I watched both, and it’s a good thing I did.

When looking at a specific profession as portrayed in film I think it important to discuss briefly my experience, limited as it may be, with it. I believe that at some point in junior high school I did take a very rudimentary elective in journalism. More to the point that is where you learn the very basics. Furthermore, being in an age with media at the tip of our fingers one can’t help but scrutinize media coverage. It is an interesting age for the profession of journalism because information, and misinformation, travels faster than ever before. Both great and not so great things are possible because of it. I think at current it’s also an interesting age for the journalist as represented in fiction again. Author Christopher Rice encapsulated it best in a tweet saying that thanks in large part to the rise of Swedish mystery novels in popular culture the literary figure of the journalist has been redeemed. There was a time when this personage seemed to be in a morass, however, that’s shifted. The cinematic tales I’ll examine, as outlandish as they might be, are closer to the halcyon days of representation.

The synopsis of Doctor X describes Lee Taylor as wisecracking, and they’re not kidding. This reporter, Lee Taylor (Lee Tracy), following a series of murders referred to as the “moon killings” in several cases seems more content to joke around (he even wears a joy buzzer – it does function as a plot device later, but still) than take anything seriously. However, that line he’s toeing never really gets crossed as he does do his job. He does so both in a diegetic and non-diegetic sense. In the diegetic, he is committed to breaking the story wide open. The police talk to Dr. Xavier (Lionel Atwill) he rounds up his staff (the suspects in the case) and retreats trying to sniff out who it is himself for a period of 48 hours. Lee sneaks in and is, in a non-diegetic sense, our eyes. He similarly overheard talking in the morgue by pretending to be a corpse. There may have been breaches in professional etiquette throughout this film, but at least most of them kept him removed from the action and an impartial observer. Breaking in where he was not wanted or allowed notwithstanding at least he was tries in the end.

However, there are worrisome acts, aside from the aforementioned ones of dubious legality, throughout. For example, he complains of all he has to go through just to get the minimal amount of information he has to report when checking in and then asked off the case, then when his ego and pride are played to he claims to have been joking. Due to the performance of the scene the intent (joke or sincerity) is obscured. Overall, though, the film seems to be more slanderous to cops than reporters. The police continuously barter with Doctor Xavier, who is not the antagonist, to allow him to conduct his own search and present his findings. The police threaten and bloviate but ultimately do not interrupt the drama before it’s time. They are within their rights to interrupt the game of charades passing for a film, but they do not.

While Tracy does make some blunders, like becoming smitten with Xavier’s daughter and becoming a part of the story he’s covering, at the end (to an extent) he is far more admirable in his efforts than the police are in their inaction. Yet none really come off that great, for the young Miss Xavier (Faye Wray) does get him to sit on the story, at least for a little while. And that’s why it’s fortunate I did the double feature because not only is The Return of Doctor X (1939) a much better film, but it also has a much better and more well-portrayed reporter.

One might think these films are related, despite having similar templates one really could at best call this film a sequel-in-name-only though you’d be hard-pressed to prove even that. Other differences are that this film was not shot on two-strip technicolor and not directed by Michael Curtiz, but this is better film, and a better portrayal of a journalist. Part of that has to do with the performance by Wayne Morris as Walter Garrett, and part of that has to do with the writing. Interestingly, in this film the reporter’s presence is felt more throughout. Taylor disappeared for large chunks of time, usually hiding out, but he was also peripheral to the action – a plot device, a living MacGuffin. Garrett, however, finds himself embroiled when a strange turn of events puts him in the middle of a controversy and makes him look a fool.

He eventually has to go at it on his own, with a little help from a friend, to clear his name and try and solve the mystery. The film seems to use the prior installment as a template rather than a bible. For example, Xavier was not the antagonist in the first, he had a murderer in his midst and struggled to discover whom he was. Suddenly, in less than seven years, he’s a mad scientist – hence the films are similar yet disconnected in that way. Likewise, Garrett isn’t a wisecracker so much as he’s a well-meaning goof. He does do his sneaking around here too but nothing that seems unorthodox, all quite par for the course.

He’s also resourceful. His friend, Michael Rhodes (Dennis Morgan) is a doctor. He asks him questions, then follow-ups, then joins him to talk to people and eventually they investigate as a team.

With regards to women and his work he’s a little more levelheaded than his predecessor at one point he says “This is no time for dames.” He only allows a “dame” to distract him, and influence a choice, in the denouement when everything is already decided.

Much as the reporter is much surer of himself, this film is also surer of itself itself. It runs a full 14 minutes shorter (62 as opposed to 76) than the prior installment and the difference feels bigger than that because of how well-placed all the story elements are. Not to mention the fact that you have Humphrey Bogart before he was big playing a deliciously creepy role. 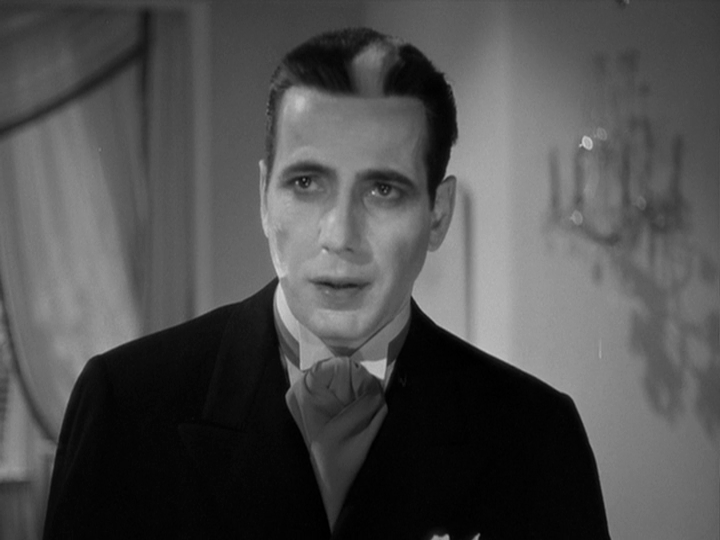 My analyses of how well each of these two fictional characters do their job is not meant to be propagandizing. There are good and poor practitioners of all professions. However, A bit of recognition and understanding by the film about how well Tracy does his job seemed necessary. The phrase “loose cannon” is cliché but it’s something that usually comes up. People who are by the book versus people who are unorthodox is a classic trope, it comes up, it’s discussed. In Doctor X he seemed more a vessel with which to tell the story. Maybe I had to rack my brain more but it was hard to come up with a reporter in a horror film that qualified in terms of time period. However, that’s not to say it’s a dead concept in the genre now. There is a bit of a resurgence. The first two, and maybe the fourth, films in the [REC] series have a journalist lead, as well as the US remakes Quarantine and, though it’s a very minor point so does The Baby’s Room. In the wonderful adaptation of Stephen King‘s 1408 to the big screen John Cusack plays a journalist of sorts, a writer who debunks supposedly haunted locales. Regardless of how omnipresent it may or may not be in the genre it is a useful device for horror that could be further utilized.