Sometimes it seems like fate when you hear about a film. Again this plays a bit into pre-life but this connection is a little more direct as I agree with the sentiments to follow. I had never heard of the film City Island until Jake T. Austin, the actor best known for Wizards of Waverly Place and the upcoming The Perfect Game, tweeted that he had just seen it at last year’s Tribeca Film Festival and said it’s the kind of film he wants to be involved in. Which is high praise from any actor and equivalent to a director saying “I wish I made that movie.”
This film concerns itself with the secrets a nuclear family keeps from each other that are unearthed as its patriarch, Andy Garcia, brings home an ex-con who is his son from a pre-marital tryst.This is the best most accurate way to encapsulate the film other cutesy pitch-like attempts give you some but not all of the tale like a partial modern day Greek tragedy with a comedic slant or Secrets & Lies with a sense of humor – both while somewhat true don’t say it all and even the secrets angle borders on hyperbole because what the film is really about is disconnect within a family unit and all members living separately, as if on islands, such that any communication is a task and keeping secrets is easier than saying what’s really going on in their lives.   This truly is a cast that is flawless and has absolutely no weak link whatsoever even in the smallest part. First, you have Andy Garcia who narrates the tale and carries us through it we see how he likes to define his existence simply such that anything beyond being a corrections officer threatens his sense of normalcy. There is Julianna Margulies who plays his wife and finally gets a chance to shine on the silver screen in a meaty role after so many successful years on TV.  Emily Mortimer, who even though most of the time she serves to give Vince (Garcia) confidence, has her own baggage and is like those we may meet shortly in life that left something behind for reasons we don’t quite know. Steven Strait as the prodigal son is also an outsider who sees things in this family dynamic so much more clearly than any of them do for he never lived in it. Ezra Miller as Vince, Jr. is the family clown but only because he seeks to break the cycle and not get caught up in the secrets himself and just be himself. There is Alan Arkin’s character whose acting class plays so beautifully into the plot of the film and he even has his own moments of struggle and frustration. There’s also Dominik García-Lorido as their fiery daughter who frequently butts heads with her mom and believe it or not I could go on.
Here is another example of where a film’s setting plays a role as the locale not only serves as a backdrop but it also influences the protagonist’s outlook on life as he defines all people by the local vernacular of Clamdiggers, those born and raised on City Island, and Musselsuckers, those who moved there. It’s more rare for a film to utilize its location to its advantage as a book would as typically you’re trying to disguise one location for another but being the title of the film as well as the location City Island was definitely a strength. 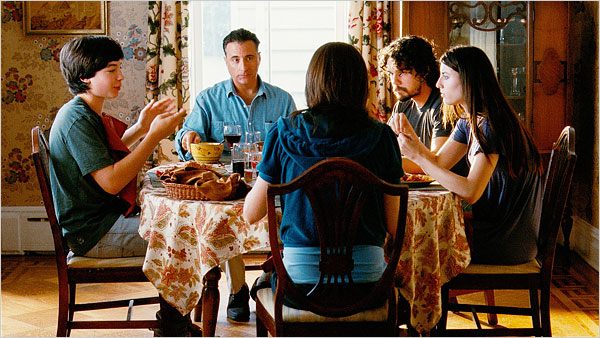 What does ultimately make this film as successful as it is that it’s a comedy. The drama is there, of course, as it is the foundation upon which all other genres are created but if all these situations are played out and revealed in a straightforward manner it ultimately would lose its effectiveness. It’s because you laugh that it feels more real because some familial situations are so crazy all you can do is laugh.
As demonstrated above where the cast deserves very high praise but note that most of what is mentioned is character related and not performance related. It truly is a character driven piece in which all the people we meet are drawn out and made to seem real. Some scenes are momentarily broken, for example, as Vince is away to build Vince Jr.’s secret/character. It’s the kind of film where one can likely walk away from it identifying with any number of characters. For example, what I found interesting was that to me Vince, Jr. seemed the most well-adjusted or at least the least crippled by his secret. He didn’t panic when Tony (Strait) indicated that he knew his secret and when Vince, Jr. found that the webcam he was watching was across the street he didn’t hesitate to go there. Also, at the end he didn’t hesitate to go outside and see what was happening at his house and interject in the conversation though he was dining with two girls.
This film is truly well-written and directed and is a strong debut that is most deserving of the Audience Award it won at Tribeca last year. Aspiring writers and/or directors should read Raymond De Felitta’s blog on the making of the film on Facebook and Twitter. If you have a chance you should seek this film out. It’s the kind of independent cinema you seek to see more often: truthful and insightful and not different just for the sake of being different- absolutely spot on.
10/10