Many times when learning about film you hear the flow of action described as peaks and valleys, a rollercoaster or even an electrocardiograph. Pandorum however has but one peak which is built up to for about 20 to 30 minutes and is thereafter followed by a steady descent into the absurd and unbearable.

When the film is contained to just Payton (Dennis Quaid) and Bower (Ben Foster), both having recently awoken from hypersleep and trying to both figure out what has happened to their ship and how they can repair it, the tension is palpable. As each new character is introduced more details are unfurled that just make the film descend further into the ludicrous and becomes more and more uninteresting.

The problem that faces this film is that it’s trying way too hard to be smart. There are twists to be found here but too many and nealy too hard to follow at times. They are not easy to guess but they are ludicrous and two are discovered in one minute of action towards the end regarding Quaid’s character. Not only are these twists difficult to accept so is Bower’s new attitude towards Payton, which seems based on our knowledge of Payton, not his own. 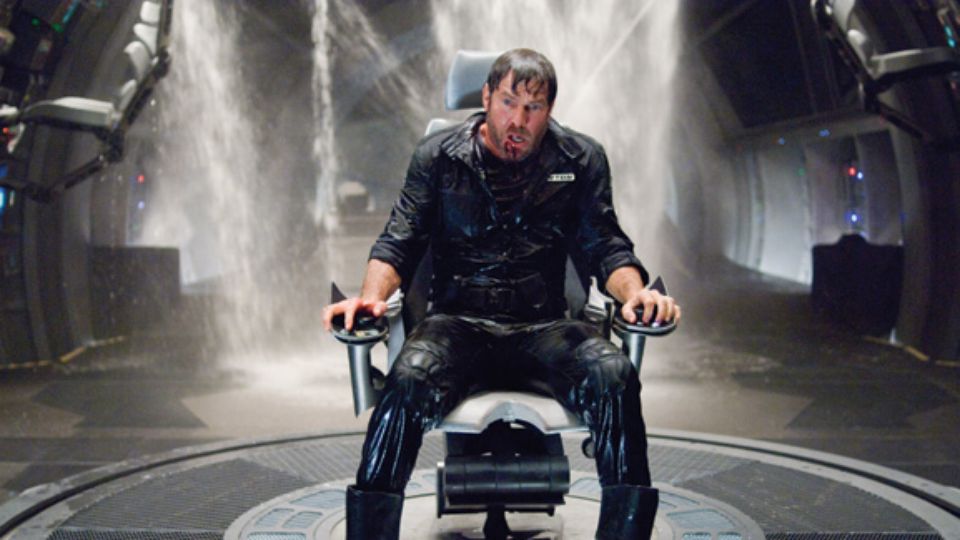 There is more fiction than science, which is not a problem in and of itself, however, the discovery of what Pandorum is, combined with the explanation of what the creatures are is so much hokum that it’s hard to deal with. The nature of the beasts attacking them on the ship is intended to make it more frightening than it was but it failed on that account … miserably.

It’s also very strange in as much as this movie seems dissatisfied with being a horror/sci-fi story alone instead it was decided that every one of the characters Payton runs into should hit first and ask questions later and be so adept at hand-to-hand combat that it seems as if a Kung Fu movie broke out. One of the least compelling things that can possibly happen is to have an extended fight sequence when we, like the protagonist, are in search of answers.
There is also a lack of logic by our supposed hero, who due to the fact that we meet him in a state of amnesia after having slept for years, is very vaguely drawn. While they barely escaped a siege by the monsters he walks about a pod area mumbling incoherently about finding his wife, which would be understandable to an extent if only it didn’t last so long that Nadia played by Antje Traue, Germany’s answer to Milla Jovovich in every way (both good and bad), tells him twice that they should be on the move.

Leaving significant plot details aside, to avoid spoilers, this film also features the most ridiculous and improbable “cliffhanging” scene ever. Payton crosses a bridge to try and get to the reactor to reset it. It collapses Nadia holds his hands and holds him up while Manh (Cung Le) reaches down and grabs the iron bridge and holds it up during a very long scene. As if this wasn’t bad enough there is a sea of monsters inexplicably lying down below as if they had all dropped E or something.

The acting for the most part ranges from flat to bad with the exception of Dennis Quaid who was rather good. It’s just unfortunate that the story surrounding his character was one of the many fatal flaws in this film.

It’s possible to go further into the details of this story and why it falls very short. The fact of the matter is that each twist renders it more and more futile and makes it a more wasted experience. It takes great potential and a few decent ideas and twists them so much all hope of quality is wrung out of the fabric of the story. The intelligent becomes pedantic and the fascinating becomes futile and facile. It starts as a film made for adults and ends as a tale for children, both of whom have their intelligence insulted. The lead was buried in this story and instead of being cute with tricks and twists they would’ve been better off telling a slightly longer more straight forward tale in proper chronology, without the amnesia aspect and the potential for drama is already better.