The Prince and the Pauper is the kind of film/story that is hard to knock unless extreme liberties are taken with the story – if it’s modified, modernized and bastardized as Disney did with its recent Sprouse brothers’ version, which had as much to with Mark Twain’s version of the tale as the film The Lawnmower Man had to do with Stephen King’s.

The television rendition that is the topic of this article, however, is more like the version you’re used to seeing. Thus, it turns into one of those traps where you could worry more about comparison than about execution. As is not unusual twin brothers, Robert and Jonathan Timmins, were found to play Prince Edward and Thomas Canty. Their progression through the tale was subtle and quite well done. As they are at the beginning they are decent and bordering on boring seeming both to be nice polite boys, a bit too much on Tom Canty’s part, however, their role reversal brings out the best in them as actors and them as well as the cross-cutting nature of the tale really get the film moving.

The film’s pace is never an issue as it clocks in at a brisk 90 minutes; the only issue is that it might just be a tad too quick. While emotionally you don’t mind the climax being resolved too quickly, if you compare that to the denouément (where several wrongs from the tale are righted) it is rather quick. The denouement is typically not seen and was a delightful twist but it just seemed that the Lord Protector’s enmity to the false King had just been announced and then things were nearly at a head. 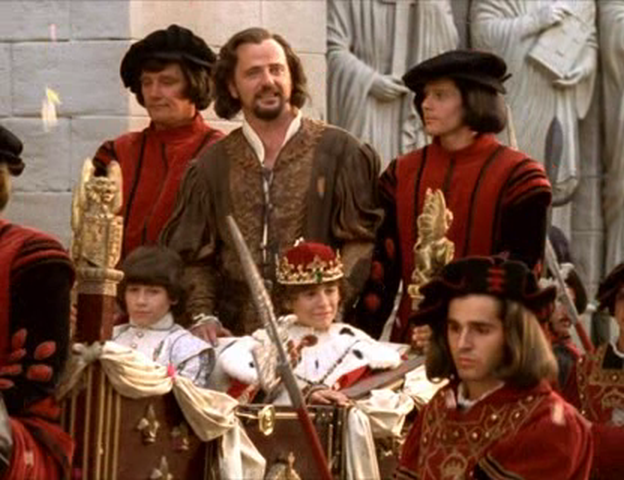 The character of Miles Hendon is always a great vehicle and Aidan Quinn played the role quite affably and very well indeed. However, while Jonathan Hyde is an effective enough villain he does wander a bit too close to being over the top and cartoonish at times- some cartoons being more realistic.

The scene where Miles discovers what happened while he was gone was great and nearly makes up for the fact that he is repeatedly over sarcastic in his disbelief of the Pauper’s tale that he is Prince.

This is the kind of tale you almost want more time to tell. Disney’s version in 1962, featuring one of the most spectacular performances by a child actor on celluloid, Sean Scully playing both parts, was two hours and felt about right and could have been longer. It’s a loaded tale which says a lot merely by the situations the two boys are put in they don’t need to preach the stories and pictures do it.

The cinematography is quite good and is aided in great part by the fabulous art direction and costuming which was sure to pack many of the frames full of vibrant colors. The locations, rarely mentioned, were very well scouted and all looked quite good and made for a very “authentic” feel and created great possibilities for the film’s visuals.

All in all this is a good rendition of one of the best and most repeatable stories ever written.