The film Grown Ups starts simply enough. It shows what may be the apex of these five friends lives collectively (a championship basketball game). It uses the death of their coach effectively to not only reunite these somewhat estranged friends but also to introduce them to us.

While this film passes with marginal colors one way in which it does excel is in that it it is rare for an all-star cast (granted how much of an all-star cast is open to some debate) to fit together this comfortably within the confines of a feature film. Some of that familiarity is due in part to the fact that Sandler, Rock, Spade and Schneider were contemporaries during the last true halcyon days of Saturday Night Light but Kevin James doesn’t fall by the wayside and fits in very comfortably with the aforementioned foursome.

The bottom line is that the film is funny, quite funny in fact. It absolutely revels in the nearly lost art of the one-liner especially in the one-line put down and as a straight comedy it works with absolutely no question. The film has other designs, however, and in trying to see those designs through that’s where some its failings shine through. 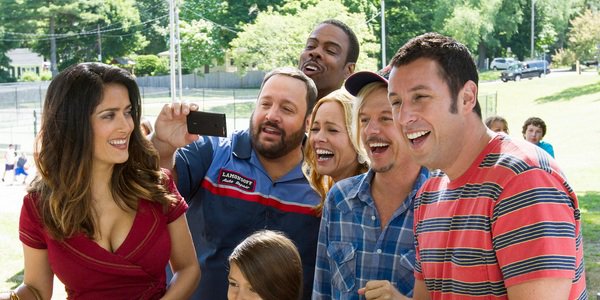 One oddity, though not entirely a bad thing, is that the sports angle of the film is almost entirely subjugated. It is ultimately a good thing because then it might’ve wandered into the uncomfortable mildly funny Semi-Pro area and that would’ve been bad.

What that angle might’ve done for the film is drive it a little bit because the pace does struggle a little bit in the second act as each character, as head of the household, deals with their own issues. This slight lack of focus and insisting on inclusion rather than having the protagonist, Sandler, be a more driving force than he is does hurt things slightly.

The two things outside of just being funny that this film really tries to tackle head on are somewhat intertwined. They are: returning children to simpler pleasures and away from technology and modernity and not always putting career before family. These are both illustrated through the Hayek- (credited in this film as Salma Hayek Pinault) Sandler relationship. Things develop slowly and are infrequently at the forefront but because they are not developed quickly and addressed immediately the film lags slightly even though the resolution to these issues are ultimately satisfying. 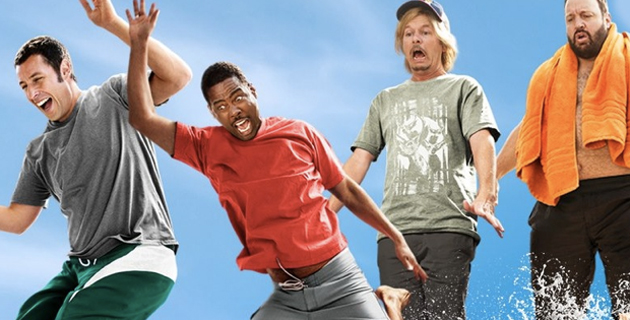 Another side-effect of the basketball being pushed into the background is that the antagonist and antagonism in general aren’t very present. The conflicts, when they occur, are typically intra-relationship. The antagonizers are the team they beat in said championship game years ago, thus making the lessening of the game seem an odd choice, until you see how it turns out, which in the end does fit the bigger picture but you just wish so much talk and time wasn’t spent on the rematch if it ultimately would not matter.

Looking at it from a purely comedic perspective it is a funny film and if you’re just out for a laugh it is enjoyable, if you want to have your cake and eat it too, meaning get a great movie along with the chuckles, you may go hungry.