When I watched the documentary Reel Injun – which is a fascinating attempt at an all-inclusive retrospective of the history of Native American characters and narratives on North American, mainly Hollywood, screens – I was somewhat surprised to see the inclusion of Atarnarjuat: The Fast Runner in it. However, it made sense for two reasons: it’s a tale of  the First Nations (Canadian vernacular for indigenous tribes) and because of its universal appeal. This appeal is perhaps most brilliantly demonstrated by the reactions of Native Americans to this film. It was a consensus: the movie is something special and “an inside job.” This term is left vague but you can tell what it means it’s a story born in a tribe, that’s lived with it, and now found a home on film shaped my Inuit filmmakers. However, this thought echoed through my mind even more when I thought to write about Atanarjuat. I had seen it the third film a loose trilogy (The Fast Runner Trilogy concluding in Before Tomorrow) and knew it was a thematic rather than chronological, but when I discovered there was an illustrated screenplay and started reading it, and its additional materials, I knew that the term “inside job” was not only fitting (which I assumed), not only a great compliment (which I knew), but also a testament to the level of work taken on by all involved, in this film and in Isuma Productions’ ongoing mission.

The Wonders the Pages Contain

On the equivalent of a blurb page the significance of the Atanarjuat in film history is made apparent: “the first film written, directed, and acted by Inuit in the ancient oral language of Inukitut…” then the accolades like the Camera d’Or at Cannes, Genie Awards and the like. But the review by A.O. Scott really gets you going if you don’t know what you’re in for:

“The Fast Runner is not merely an interesting document from a far-off place; it is a masterpiece. It is, by any standard, an extraordinary film a work of narrative sweep and visual beauty that honors the history of the art form even as it extends its perspective.”

Then came the first awe-inspiring, chill-inducing moment that came only in this book, which is a timeline of the Igloolik area, where the story is set and shot, starting at 7,500 years ago with the emergence of the island to the period between 1995 to 2002 when writing the film began and after the festival runs and worldwide release.

With education being one of Isuma’s goals aside from preserving oral traditions (Isuma is the Inuit word for ‘to think’), there are quite a few enthnographic supplements to the screenplay the first being a letter from Claude Lévi-Strauss of the Académie Française to Bernard Saladin D’Anglure, professor at Laval University and Head of the Institute for Traditional Inuit Life, reacting to the film but also hoping for added information, and intimating that a deep link between the cinematic construct and cultural traditions, which do seem to permeate the film.

Yet this is only dipping your toes in the water. Then you get Zacharias Kunuk, one of the writers and director of the film, telling the story of how he first heard the legend of Atanarjuat as a child. And reading that brief missive just made me appreciate the weight not just of the story decisions he had to make within the given narrative but also the project selection. This was to be the first project of its kind and this was the story and he was the one not only trying to keep this legend alive for future generations but also dealing with modern filmmaking headaches like raising capital. 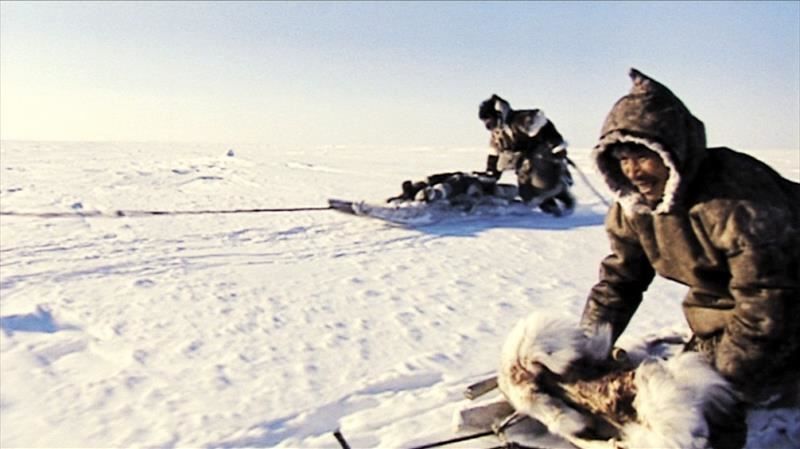 This hurdle, and the added difficulties of it are underscored in the interview with Paul Apak Angilirq, a co-screenwriter, not only did they confer with a group of elders on behavioral differences, and cultural differences in pre-colonial times, and the old oral version of Inukitut, and pick between the minor variations that exist in any legend passed down by oral tradition, but also they had to translate the script into English as it was being written in hopes to try to secure grants and other funding. 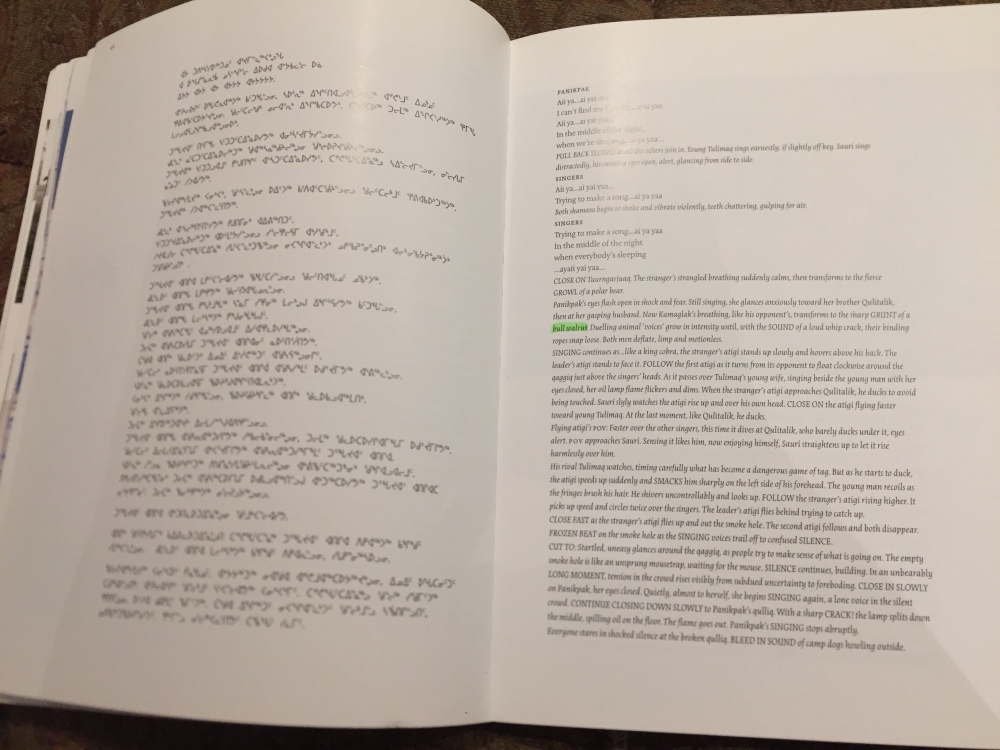 These two versions of the script are put to full use in the illustrated screenplay, aside from behind the scenes photos, production stills, inset boxes with more pertinent cultural information as appropriate; and most notably and poetically parallel text syllabic Old Inukitut on the left, English on the right.

Since two screenplays are crammed in the pages the spacing is condensed to accommodate the photos. Despite this the movement of the story is evident, and even some details in the script that aren’t strictly speaking visual details, are conveyed in the film.

After the screenplay there is an extended ethnographic commentary from the aforementioned Bernard Saladin d’Anglure that covers the Legend of Atanarjuat, the Inuit people in general, and shamanism. In discussing the Inuit he goes from pre-colonial times, and mentions Knud Rasmussen whose Thule expeditions and journals form the basis of the hard-to-find second film in the series up to and including the end of the last holdouts against radio, television, and formalized permanent settlements, creation of the syllabic alphabet and contextualization of the formation of Nunavut. It’s a testament to the non-fiction writing and insights offered that I gladly read the front and back matter without much hesitation.

This was not the first book indigenous legends with parallel text I read but it much more readable in part because while the goals are similar (imparting knowledge and preserving traditions) the audience for all parts of this book is fairly wide, and there isn’t a section that reads like it’s mostly for specialists (e.g. linguists or anthropologists).

Even if you never heard of the term ethnography before, if you know and like the film I’d recommend you seek out the illustrated screenplay. If you want to look this screenplay up, I’d say find the film first and all of the book will have that much more impact on you.