If you read this blog consistently while I have tried, and I hope succeeded, to keep content fresh and diverse. However, as I intimated in this post particularly, I’ve been far less interested in reviewing theatrical releases lately (mini-reviews don’t fall under that category). There’s a certain bit of “FIRST” to it that can be tiresome and doesn’t allow one to reflect. Moreover the more interesting hooks to me to write about lately have been pieces about the films, that aren’t reviews like I did for The Dictator, The Sitter and most recently The Lone Ranger, to name three. It’s easier to write a review at polar extremes. However, this one came about through discussing the films and found me pretty firmly split on and that compelled me to write this. I say only to this to close this introduction: I do not write from a perspective of consumer advocacy but of vocalizing my thoughts and why they are so. If you read between the lines, you can usually decipher if the film may be your cup of tea.

Without further ado, the review…

Perhaps the best way to encapsulate my thoughts on this film would be to echo the sentiments I tweeted about it the next day and expand upon that. “Percy Jackson: Sea of Monsters has highlights that are higher than the first (film) & lowlights that are lower than the first (film); a mixed bag.” I admit that I’m a fairly positive person, or I try to be. I can’t say I didn’t enjoy it, I just didn’t as much as I could have. A higher degree of satisfaction was within reach but there were frustrations and eye-rolling moments to be had.

Due to viewing commitments with different groups of friends I saw the first installment quite a few times and after just one viewing this one already felt more memorable than the initial foray. I don’t recall any really bad failings in the film prior like this one had; yet there were some things that really worked much better than before. Having said that, it’s an uphill struggle to get past all the encumbrances.

Many of the issues stem from the writing: the dialogue is frequently where there are misses. Many attempted jokes are lame but don’t land. There are some good ones. Delivery plays a role. Stanley Tucci has impeccable timing and makes most of his material work, Nathan Fillion’s brief appearance is one of the highlights, Lerman has one great line, which was given the benefitted of my anticipating.

However, these writing concerns are not just limited to the attempts at levity, but also with building character. A lot of the scripting problems lie in characterization of Annabeth (Alexandra Daddario) and Clarisse (Leven Rambin), each has a character flaw we know they’ll work through but each spends half the film repetitiously re-enforcing their one-dimensional attitude regarding their prejudice to the point of cartoonishness. 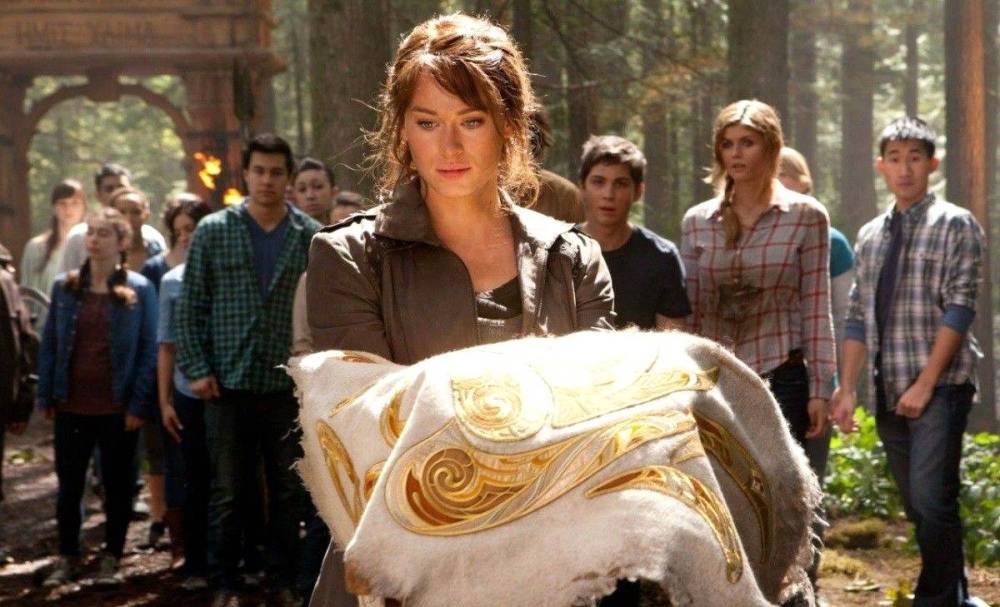 Another odd aspect of the series made itself evident first in the beginning and crystallized as the film moved on: There is a mystical cab that takes the characters part of the way on their journey. The three “drivers” have one eye among them them and drive recklessly and the cab can split; a clear homage to Harry Potter and the Prisoner of Azkaban, both the book and the film pre-date this book/film pair. What it underscores is that: while both this and the Potter series deal with subcultures of superhuman beings with the fate of the world in their hands, unbeknownst to mere mortals, there’s an intangible lack of epicness that permeates this world. It’s smart and creative how the mundane hides these things, but it never gets awe-inspiring when the curtain is pulled back. The divested way this series is approaching its subject matter, fronting action first, forsaking character depth and internalized; conflict is undermining it no matter how high the stakes get.

Which brings me to the The CG, which is again hit-or-miss. Overall, it’s likely better than before but while some of the designs are great, but the work isn’t the best, which is unfortunate because that being improved would go some of the way to creating the kind of impact that is being sought here.

Logan Lerman is someone who I’ve twice nominated as Best Actor at the BAMs, in 2009 and 2012. Yet, this series gives him hardly anything to sink his teeth into. He has the one-liner moment and the compulsory scene where he can be emotional but not much in between. The stuntwork in terms of choreography and execution is Grade-A stuff and he had a small part in that, but most of those kudos go to that unit.

I’m not a staunchly anti-voice-over person. However, another misstep was the voice-over at the very end which explained the implications of what just happened and blew the doors wide open for the next installment. Had there not been that voice over and the film left off at the last line of dialogue the ending would’ve been awesome. Yes, awesome. As it stands, it wasn’t.

There are surprises to be had and when things stop needing set-up the film really clicks, pacing is never an issue. The introduction of Tyson (Douglas Smith) is a great addition in terms of character and the performance by Smith. While Freudenthal does fine here anew as he did with Hotel for Dogs and Diary of a Wimpy Kid, the series is sitting in a good place at the end that makes you hope that story and forthcoming director can really ratchet up the franchise to a newer, higher level.

Owing to that fact, I marginally give it a…

Percy Jackson and the Olympians: The Lightning Thief is the latest film and franchise attempt from Chris Columbus. While there definitely are some very strong positives to this film there are a few drawbacks as well.

The film is built upon standard story elements both of our age and the fantasy genre, but at least it puts them to good use. For example, it’s a quest film, however, that is openly addressed when Percy is getting volunteers to help him. His mother is married to a jerky man, who is Percy’s stepfather, and Percy has a learning disability which both fit neatly into the plot in very creative ways. Not so creative ways are the ticking clock which is introduced to indicate that Zeus needs his bolt back by the summer solstice, the reason he needs it back is never established. The trio is somewhat Potter-esque and the necessary mentors are all in place to aid in the unwitting heroes’ quest.

The cast for the most part is very strong with a few glaring exceptions. The film is carried well by the young leads particularly Logan Lerman who has to play both awkward teenager then embracing and capable of living up to his demigod status. Perhaps more important is Brandon T. Jackson, who plays Percy’s protector and provides much of the comic relief in the film and he steals the show. Alexandra Daddario is also very capable in the role of Annabeth.

The supporting cast brings the inconsistency. You have the stark contrast of the brilliance of Uma Thurman‘s short turn and Rosario Dawson‘s charmingly sinister appearance contrasting with the wheezing-in-an-attempt-to-sound-older Pierce Brosnan and Catherine Keener, who is not as effective as she was in Where the Wild Things Are.

The CG in the film is solid albeit a little more inconsistent than desirable. Medusa’s head for example could look convincing or bogus depending on the angle its seen from. However, the Hydra and the water-work were spectacular.

The film is a funny and action-filled piece of escapism, which includes some very well-choreographed swashbuckling. It also wastes no time in diving into the tale and letting us know there could be war.

On a side note not really impacting interpretation of this film, all seems well and sewn up at the end of this film and there is no apparent opening for a sequel.

This is an absolute dream of a film that will likely be overlooked by moviegoers and the award season alike but is one of the best films of the year. Due to the fact that much of the film deals with Renée Zellweger’s character seeking a new husband it has been classified as a screwball comedy by many, however, this is but one aspect of this film.

This film is a story full of characters that are well-defined Zellweger who is sensational in this part has a very unique view of life. She in a Blanche DuBois kind of way relies on the kindness of strangers but seeks a certain standard of living for her and her boys. Finding a new father is how she thinks she can best mother them and drags them around the country in the 50s while seeking a new beau.

Being dragged along with her are her two sons Robbie and George. Robbie, the elder, is interested in theatre and fashion and played brilliantly by Mark Rendall. Robbie’s homosexuality is a prime example of the refreshing nature of this film. He just is and it’s like the white elephant in the room and is rarely mentioned which is accurate but he is totally accepted by his mother and half-brother. He also wields a gun without much drama and little stereotype in onepivotal scene.

George is less pleased to be along on the trip. He is more of a realist and frequently clashes with his mother. He is played with remarkable aplomb by Logan Lerman in a startling turn. Lerman will be a star for years to come based on his talent alone.

Renée Zellweger, as mentioned previously, is sensational in this film where she slowly but surely shows there’s more to her than meets the eye and yet realizes her imperfections. She completely immerses herself in this part and disappears into it.

This film has dialogue which is funny and effective. For every funny scene there is one of real emotion. Even though some events you know will happen but the how of it is the fun and what you don’t guess.

The score is also a unique signature and effective. It is jazzy and similar to that the band Dan, the boys’ estranged father played well by Kevin Bacon plays.

The entire supporting cast was extremely good. It’s the kind of movie you can try to fault but you won’t find much if anything. What a great find – go and see it.