When by chance I found that Comet Over Hollywood was doing this blogathon there were a number of options I could have selected. Quite frankly, I was a little late in noticing that it existed so some good options that I also would have liked to have covered were taken. However, I don’t regret it because whenever possible I like to go a bit outside the norm. And choosing to discuss Jackie Searl (or Searle as he was occasionally credited) does that. The first thing that sets the selection apart is that he was rarely a leading player, more often he played in support.

However, this year, somewhat in the spirit of my Neutron Star Award, I’ve had chance to find not only more range in his performances but also a rare early lead. While Jackie had a long career as a character actor after a hiatus that allowed him to transition in the age range, he was frequently cast to his type. Yes, films type actors young and old alike.

Realizing his range did hearken me back to something I heard Jack Lemmon say back on Inside the Actor’s Studio. He was recalling a conversation wherein he complained to his agent about the kinds of roles he was getting and being offered. “But I can do Shakespeare,” he protested. His agent responded simply and calmly “Yes, Jack, but other people are better at it.” That’s not to say actors shouldn’t take risks and directors haven’t done great things when casting against type, but typing happens for a reason and it’s usually because said actor is inordinately good at a particular task. With Searl, in his younger days, he was not only usually a heavy, a villain, but he had an innate ability to come off as smug and detestable, which is quite a higher calling than simply playing a villain.

What reminded me of the the Lemmon story was when I saw him in earlier roles in Poverty Row titles. One in particular, which may go down as one of my favorite new discoveries of the year is Hearts of Humanity. Here he plays the affected child, suddenly orphaned, new to the States, who is the honorable one, who sets the example for his wayward, newly-adopted brother and sacrifices himself for him. The only thing off about him at all is his Irish accent, but that wasn’t uncommon back then. Not that Searl wasn’t adept at an accent. In fact, before I decided to do this focus on him I thought his playing American was putting on an accent not when he was playing British, which he did often.

So in that film, and in other titles like One Year Later and High Gear, all of a sudden there was this complete other side to him. Granted the writing, such that it was, made him obviously perceived as a likable character, but he pulls it off with ease. Many mature, trained actors have issues not only shaking their persona but their perception. Searl was the pre-eminant, go-to jerk of the young actor set around this time (the early-to-mid-1930s). But playing the good kid was his “Shakespeare;” he was good at it but he was so much better at engendering an audience’s antipathy that he got those roles more often then not when the studio films came his way.

Peck’s Bad Boy is another film wherein you see him in his more usual mold, whereas Jackie Cooper, being the lead is a more rounded character and has justifications for his actions; he’s merely antagonistic. In fact, in one of his first appearances, The Sins of the Children, his type was set as his sole purpose in playing the younger version of one of the main characters was to be bratty. Slightly different from those two, but still on the unlikable end of the spectrum, was his turn as the doltish false claimant to the title in Little Lord Fauntleroy. 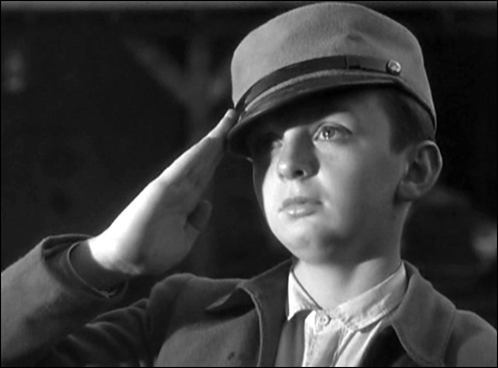 Of the films of his I’ve seen thus far he had one role of significant size that had an arc, and change of heart. In No Greater Glory he starts off in the vein you most often saw him: officious, haughty and bothersome. As events transpire, however, he softens. The maturation of the characters, as well as the message conveyed are among the things that make that particular film so powerful. That same year saw the release of A Wicked Woman, which implemented well his ability to cry and allowed him to play the victim. As he grew, parts that allowed him to show both sides of his ability came more frequently. In Little Tough Guy he does end up being a slimy type, but if you didn’t know who he was you’d buy the nice, rich kid act he pulls through the first few scenes, but slowly and surely he shows his character’s true colors. It may not be his most impressive turn, but there’s a confident ease to all he does that stands as a harbinger of the long-lasting ability to do character work that he found later on.

The generation of young actors that graced the silver screen when sound was in its infancy was perhaps one of the deepest in movie history. If you follow the trajectory of a lot young performers, many of whom were usually relegated to supporting roles, you could really see just how gifted a lot of these actors are – the fact that a talent like Searl’s was usually utilized as a supplement is testament to that, but it does not make his work any less effective or memorable.

As is my usual policy when deciding to write an in memoriam piece I don’t like to rush it to strike while the news cycle is hot. Part of the reason why is that I like to give the people I choose to write about their due rather than being short and sweet to the point of being curt.

Jackie Cooper’s was a long and extensive career that can not be summed up in a few short and sweet sentences. I’ll try and give it better perspective here.

From 1929-1931 Cooper made about 13 shorts as part of Hal Roach’s legendary Little Rascals troupe. Hal Roach being one of the legendary producers of Hollywood and the Rascals being one of his longest lasting legacies.

Below in two parts you’ll find one of their shorts where Cooper features prominently.

1931 turned out to be a watershed year for the young actor who in that year went most of the way to establishing his Hollywood immortality. First, there is his participation in the film Skippy, which earned him a nomination as Best Actor. A film which is mysteriously unavailable on DVD in the US.

However, in that year he also delivered what is likely his most memorable performance in The Champ, a film for which Wallace Beery captured Best Actor.

Another fine and more mature performance from Cooper can be found in the film Peck’s Bad Boy, which is a wonderful example of classic filmmaking because the story is so simple but so emotive. It also features two outstanding antagonistic performances by Dorothy Peterson and Jackie Searl. The film can be seen in its entirety here:

Mickey Rooney, Freddie Batholomew and Jackie Cooper in The Devil is a Sissy (MGM)

Surprisingly Cooper never did capture the Juvenile Award, a special Academy Award that was awarded to a deserving young actor from 1934 to 1960. However, he did have another memorable performance with two of the other finest actors of his generation Freddie Bartholomew and Mickey Rooney in The Devil is a Sissy in 1936. His character being the most hardened of the lot.

While like many child actors Cooper found the work to be not as good or as consistent as he transitioned to adulthood he did keep working and with the advent of television he transitioned mediums and started building a long and impressive resume of guest appearances on the small screen.

Between 1948 and 1971 there was but television work, he also garnered consecutive Emmy nominations as an actor in 1961 and 1962 for his work on Hennesey, but then there was the occasional blip of a film until he was cast as Perry White, the editor of the Daily Planet, in the Superman films, the initial wave. It is in this capacity that he is known and remembered by many today as I have mentioned before many are lucky to be known by all for one film or project, even more fortunate are those who are known by many.

Jackie Cooper had many incarnations as an entertainer but in all of them he entertained audiences and endeared himself to them. He will be dearly remembered and sorely missed. He left an indelible mark on film and left innumerous memories behind. Let us take a moment and reflect on them.