Coinciding serendipitously with March to Disney, TCM tonight will feature its second block of films from the Disney vault. This block debuted in December after a deal with Disney. Here’s TCM’s blurb on tonight’s block:

TCM is honored to present the second installment of Treasures from the Disney Vault, an ongoing showcase that features a broad mix of classics from the Disney library, encompassing live-action films, animated shorts and features, documentaries, TV series and movies and a variety of short subjects. All entries in this month’s Disney programming are TCM premieres.

Features include The Three Caballeros (1944), an animated musical feature film that mixes animation and live action as Donald Duck celebrates his birthday with gifts from Latin America; and Walt & El Grupo (2008), a documentary by Theodore Thomas about a South American goodwill tour by Disney and his creative team as they gathered material for The Three Caballeros and the 1942 Saludos Amigos.

The Story of Animated Drawing (1955), originally broadcast on the TV series Walt Disney’s Wonderful World of Color, traces the history of animation and features “The Nutcracker Suite” from 1940’s Fantasia as performed by Leopold Stokowski and the Philadelphia Orchestra. Darby O’Gill and the Little People (1959), a live-action feature about an Irishman and his battle of wits with leprechauns, counts Sean Connery among its stars. Another live-action adventure set in Ireland, The Fighting Prince of Donegal (1966) is based on the real life exploits of the 16th century prince “Red” Hugh O’Donnell as played by Peter McEnery.

The two shorts are Babes in the Woods (1932), a Silly Symphony cartoon that loosely retells the story of Hansel and Gretel; and I Captured the King of the Leprechauns (1959), a TV episode about the folklore that inspired the Darby O’Gill movie.

Having written about the Good Neighbor Policy and the Three Caballeros before I’m glad to see that film kicking things off. Then the docs I’ve not seen, including Walt and El Grupo, should be enlightening. The shorts as always should be great. The St. Patrick’s Day appropriate titles should be interesting even though I’m not a fan of Darby O’Gill and the Little People. Set your DVRs!

Last year to coincide with a trip to Walt Disney World in March, I decided to have a month-long focus on Disney fare. Their vaults are vast and varied enough such that this is a theme that could recur annually. Below you will find links to the inaugural posts written for the theme. 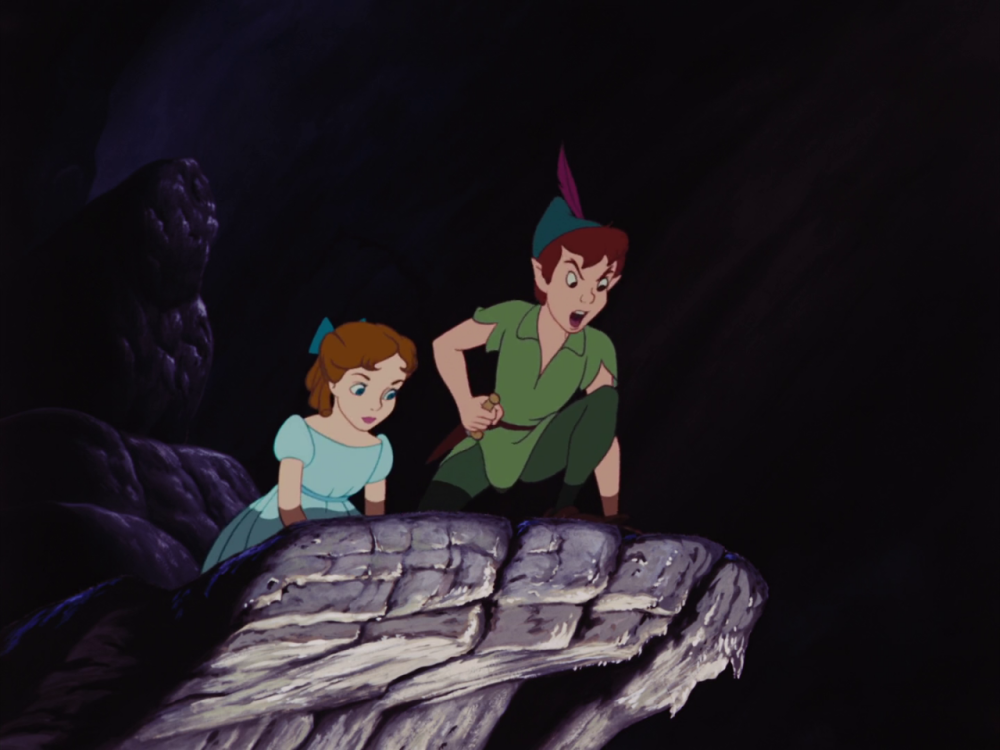 Walt Disney’s production of Peter Pan is one that seems like its oft overlooked. That is why I a glad that it has recently come back up in the Disney rotation both with a Blu-ray release and also with a new Disney World attraction. Of course, the story is one that is universally known and beloved, but what can be lost with such a ubiquitous narrative is the distinguishing characteristics of each individual rendition.

Disney, from 1938 to its eventual 1953 release, dedicated himself to bringing this story to the silver screen anew in a version unlike anything anyone had yet seen. It’s ingenious but sometimes it takes a genius to think of something so ingenious: even in the 1950s the only way to bring forth a revolutionary interpretation of this story was to animate it.

With the conventions of stagecraft being stripped like actors flying on wires, an actor in a dog suit, a light as Tinkerbell and a girl playing Peter; the easiest way to changes these things, things that occurred on screen in the silent era, was to draw it.

The recycled documentary on the Blu-ray (it was on the DVD release as well) does well to highlight that the animators in this film had the brand new challenge of attempting to depict weightlessness of the human form. For to be able to fly, a person had to also be able to float.

Disney to this point, and past it in its history, used live models regardless, but never had their role been as pivotal as it was here for the animators through them were given guidance, and a frame of reference without the constraint of cameras rolling and a production around them, as to how to create said effect. 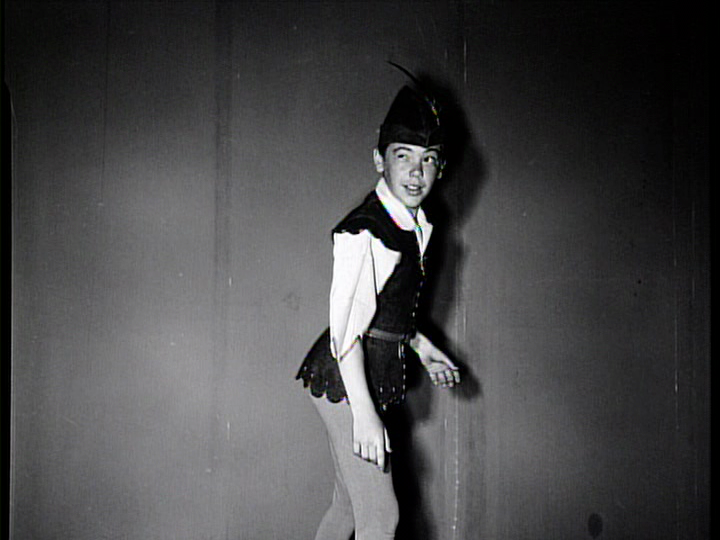 The actors ability to pantomime for the animators was just one thing that had to be taken into consideration. Casting in this day and age at Disney was a multi-faceted process. Typically, animators were usually dealing with specific characters so they too had to “cast” so to speak. Yet, there was also the voice aspect to consider. Here there were a few inspired choices made.

First, there was Hans Conreid, who was most notably a radio actor, in the tandem roles of Mr. Darling and Captain Hook. There is a duality to his voice and so much emotion that he can emit through it that makes it one of the more indelible performances in the Disney canon. It is also rightly noted that Bobby Driscoll, although Disney’s first contract player and roundabout the right age for the part, was still the proper choice. Sure, it was the easy choice but it was the correct one. It was his Disney swan song, and perhaps his most lasting turn.

Also interesting to note here, in hindsight, that some of the concept art was darker than what Walt eventually approved for use in the film. Especially considering that it seems that P.J. Hogan’s sensibility in his ’03 live action version is closer to those original concepts. While it would’ve been great to see those things drawn by the talented hands at Disney un-softened. I look at it more as a calculated decision by Walt rather than softening for softening’s sake.

There is still in this story the threat of death and of growing up being flaunted in the face of children. Hook’s menace is quite real and present, thanks in large part to Conreid. Therefore, the visuals needn’t be as harsh as initially designed to get the message home. The emotions desired will still be elicited. Also, at a young age kids don’t necessarily consider stylistic choices. The danger, the emotions in general, are generated by the characters how they act and interact rather than the atmosphere.

What Walt Disney’s Peter Pan is most definitely Disney’s version of the narrative but also one that is progressive in terms of altering, and depending on your opinion, correcting prior conventions of this particular narrative. Like many things in the canon there are the iconic moments, namely Tinkerbell who became part of the Walt Disney Pictures logo. And she should be, since the first cinematic image of the character was his creation. However, in that logo she blends with Cinderella’s castle and is removed from her original context. The context being this film, which in spite of its changes and quirks is one of the true Disney masterpieces. A labor of love unquestionably re-branded, but also indebted to its source, and one that should live in the consciousness of children and children-at-heart for generations to come.

Though it really kicked off in my last Short Film Saturday post, and there were Disney titles among my 31 days of Oscar selections, this is where my March to Disney theme starts in earnest.

As to the timing of this focus, that owes itself to the fact that I will be going to Disney World during this month. Naturally it would seem to be the right time to get caught up and re-focus on their titles.

A brief history of my relationship with Disney films is as follows:

So far as I can remember a re-release of Bambi was the first film I went to see on the big screen. Bambi, of course, being one of the more silent and also more marking of the Disney animated features due to the fact that it not only tells the tale of an orphaned child, but within the story includes the death of Bambi’s mother.

Aside from that I saw many of the classics countless times as a kid.

My first trip to Disney World occurred when I was fairly young.

As I grew, and started to watch films in all forms, my horizons, of course, expanded. There was the occasional Disney title that would then not interest me, and after seeing Hercules, and disliking it a great deal; I went on a hiatus.

However, I did return. Now, through my fandom of Disney, I have come to a very safe and accurate, I feel, metaphor about said fandom. If you like the product of a studio its akin to being the fan of a sports team, your loyalty does not forbid your honesty. Yes, there are things about the company in terms of business over the years, and on the creative side, that I don’t necessarily agree with. However, that doesn’t color my view of their titles I’ve seen that work for me and I enjoy.

Aside from the timing of the trip this is also a focused and concerted effort to get DVDs or Blus that I haven’t gotten to yet seen. So there will be some re-assessments, reviews and other pieces and based on what I’ve already seen. I’ll likely rank the Disney feature-length Animated films, the crown jewels in their empire.

For a number of years, namely the ones where I was off elsewhere, Disney was fairly lost. Now, however, it seems that regardless of which branch of the family tree you’re discussing they’re doing fairly well both creatively and financially. Many of the pieces I write will be on the animated films, both during and after Walt’s time, but there will also be discussion of their live action ventures and maybe some talk of the more recently acquired subsidiaries of note namely Pixar, Marvel and LucasFilm.

So my first post on an individual film should be up tomorrow. Enjoy! 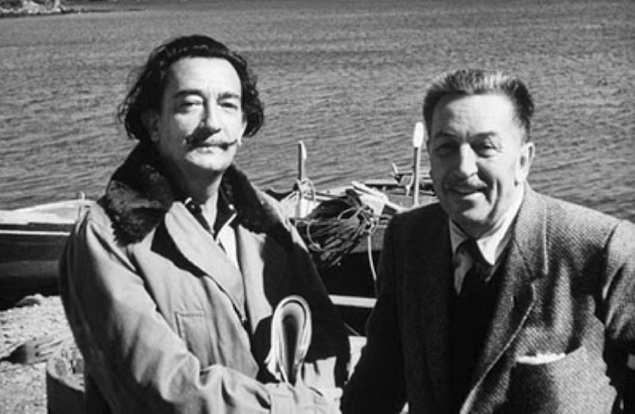 There’s not going to be a lot of lead-up to this short. First, I must thank one of my frequent readers for suggesting it to me, as it is a short I truly enjoy. As for the film itself, this is what happens when Salvador Dali meets Walt Disney, literally.