As the number of films I watch has grown so has the number of films I rank among my best of the year. Essentially what matters to me is not so much the number of films included amogst the best of the year but rather the proportion. When I started these picks as a teenager I’d pretty much only be guaranteed a Saturday matinee at the local UA so that amounted to about 52 films a year. Meaning the five Best Picture nominees were equivalent to the top 10%. It’s not a bad rule of thumb. Granted only picking 10 Best Picture nominees of about 222 films deemed eligible equals about 4.5% of the total films I viewed. Therefore it’s not much of a stretch to take my Best List which goes beyond just the nominees from 15 to 25. In fact, I just had to pick the first few that came to mind. Some that wouldn’t show up on another list I did because 30 would be easily achievable.

Without much further ado here is the beginning of my Best Films countdown:

Jon Foster and Trevor Morgan in The Brotherhood (Phase 4 Films)

Who saw this movie? In all likelihood practically no one, which is why it had to show up here. Perhaps the biggest mantra of my year-end write-ups will be advice for film enthusiasts: “Seek and ye shall find.” With almost as many distribution paths as there are films now, it is likely something you’d be inclined to enjoy will slip through the cracks. I had to confirm what this film’s release date was on IMDb and got the disc from Netflix. Aside from my mini-review round-up post I never saw it elsewhere but essentially this film is part suspense, part horror, part tragedy and part comedy. It takes a commonplace situation and exploits it to its fullest potential and thus has been very memorable to me and could easily have finished higher.

The first thing I need to say is that I wish I viewed a high enough volume of documentaries to give them their own list. As it stands I do not. I do feel confident in this year’s slate of nominees but unlike other film categories I had to limit it to just five as opposed to ten simply because I didn’t see enough to justify a higher count. The last BAM-related note will be please excuse my fudging the rank here as I am writing this ahead of the winners’ announcement and want to preserve drama.

As for the film itself while John Waters almost always says things in a way that makes him sound like he’s not serious, for example: when he picked this film as one of his favorites of 2011, he doesn’t joke around about his opinions and as you can see he has perhaps the most diverse top 10 you’re likely to find anywhere. This film would end up on my list regardless of whether anyone else selected it simply in part of how surprising it was cinematically. There was a lot of talk before the film about how it’s not just a concert film like previous ones I’d seen like the Hannah Montana/Miley Cyrus one or the Jonas Brothers. Not only were they right about that but they still left you unprepared for what a great documentary it is.

The story already existed for anyone who knew even some of the details to do something special with it and Jon M. Chu scored big time. It is necessary for any viewer of a documentary to clear the subject hurdles, which can be two-pronged: the subject which is discussed and/or the person who is the focus. Regardless of one’s opinion of Bieber (for the record: mine was and is positive) this is an incredibly well-crafted film that isn’t just an extended music video or a sugary biopic but pretty complete and in hindsight benefited from Davis Guggenheim withdrawing for they found in Chu a director ready, willing and able to give this film the time and energy it deserved to be a viable aesthetic work and not glorified marketing.

All stated above about documentaries is true. Add to that the fact that good documentaries can inform as well as entertain. Ayrton Senna to me was probably the first national sports hero of my lifetime. My whole family is Brazilian and when I was very young he was a world championship contender while the national football (soccer) team was an also-ran. However, being young there were things I didn’t understand for example the nature of the Prost rivalry, his drought, the controversial Mansell year and the exact circumstances regarding his fatal crash. Not only on a personal level did it finally allow me to adequately grieve and see the pain his loss caused so many in Brazil but it also filled in the gaps in my knowledge.

Furthermore, it’s rather a great cinematic feat. There’s great original music which heightens the film but Formula 1 stories are typically rare due to the high cost of archival footage and with a deceased subject the dangers of Talking Head Syndrome is nearly unavoidable but you rarely see one. There are intro shots and L-cuts and there’s narration or dialogue through muvh of it but it’s typically archived or creatively cut.

All in all it’s a great film that has impressed both racing and film fans alike and performs the unenviable task of delivering an emotional wallop with a foregone conclusion.

This film may fall into an uncomfortable category for some, it’s one of those “old pair of slippers” kind of movies meaning you know the look and feel of it and you’ve seen it before but you love it anyway. However, this one is a little like you’re looking at them from a different angle because whether it’s through Jónsi’s mellifluous score or the unexpected artistry of the flashbacks, Cameron Crowe, as he does with anything he makes, pours his heart and soul into the film and what’s more is that you feel it. He has an uncanny knack for picking source music also, it’s unparalleled. This is also a film that showcases pretty much everything Matt Damon is capable of, which is a lot, in one role without reaching. It reveals a rising star in in Colin Ford and shows the flipside of another in Elle Fanning who plays virtually the opposite character she plays in Super 8.

Essentially this film exemplifies one of my axioms that it’s more about the execution than anything else. Aside from the relatable, moving family story there are also some treats for film fans like Crowe working with Patrick Fugit anew and Scarlett Johansson coming full circle to another animal project. 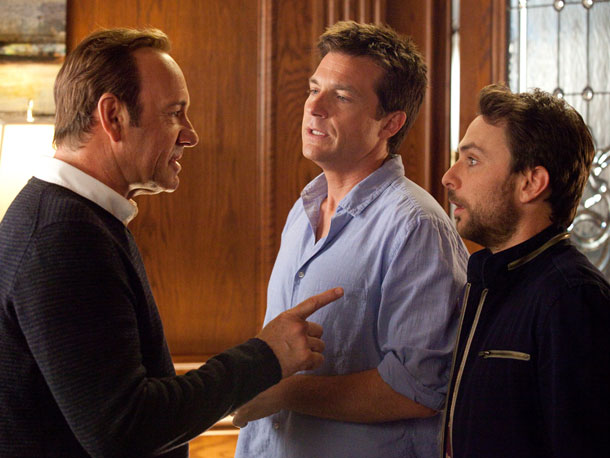 I’m not one who consciously takes a formulaic approach to making these lists but in all likelihood, given enough slots to pick from, I will end up with a comedy on my list. It was hard to decide between this and The Sitter considering everything else it had going for it but the fact of the matter is I scarcely came up for breath during this film. It is the most consistently funny film I saw lat year and boasts the best comedic ensemble by far. While it may seem like another boys’ club buddy comedy in a superficial sense, the issues they face though taken to obsessively ridiculous extremes (like in any good comedy) is universal.