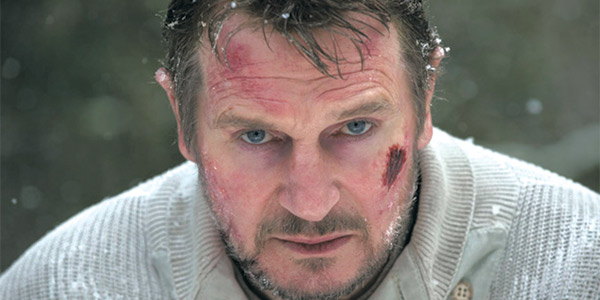 Here’s another Liam Neeson butt-kicking his way out of trouble by himself with the promise to be so much more than the other ones. In some ways it better but in other ways it is more frustrating when things don’t quite work which they don’t on more than one occasion.

Now where this film succeeds greatly is in the use of the poem in voice over and then being explained later on along with the flashbacks. There are few things I enjoy more than effective and well-placed flashbacks and that I cannot take away from this film.

Now the film is about survival on the surface and frankly it’s better at skimming the surface than trying to plumb the depths. Yet even in the surface discussions of survival there are too many old hat, “necessary” conversations. One of which is the repetitive “Who made you boss?” discussion. It always ends in submission and it comes up too often in this film. I’m sure there are instances of one person leaving the pack and dying but you don’t see it enough.

One area wherein I don’t have issues with the film is on the animal rights front. There are reports of some groups being against this film. That’s silly. The film does a good job of explaining wolves habits and when they will attack and it’s a Darwinian set up. Yes, in his “past life” Neeson’s character was a contract killer but the bulk of the film is a kill or be killed basis. Not to mention that many scenes had no actual wolves in them.

So the animals pose no problem to me in my viewership and enjoyment of this film what does is one character in particular. Death to a film where it’s life or death is your not caring in the least of one of the character’s meets their demise, worse yet if you want it. That character to me in this film is Diaz. It’s not Grillo’s interpretation that I have an issue with it’s just that it’s written in such a way that there’s next to no chance for redemption for him.

Yet through all that I was hanging on for dear life and then the ravine swinging sequence and the end really took it over the edge. Now the former I can discuss. After real, gritty action suddenly a cliché, and an implausible one at that, breaks out. And it was lengthy and dumb and yet I still was kind of into it. Then it ended.

Like with any film I try and find things to like and there were quite a few things here. I can see how one would like it but it just really fell short for me.