This is a recapitulation of a paper I did in college. This is part eight in the series to read other parts go here.

The music video of all visual art forms probably had the shortest period of time where it was a true art. If you look at music video now it becomes more and more rare to find one that attempts to portray some kind of narrative it has become what the artists originally feared merely a showcase for a song and an artist who looks like they should be an actor. The 1980s, however, offered some very unique and experimental ventures in this new medium.

MTV, which once upon a time stood for Music Television, launched in August of 1981 and it debuted with one of the better videos they ever aired called “Video Killed the Radio Star” by The Buggles. Artists debated the intrinsic value, or lack thereof, of music videos Hall & Oates were opposed to them and Madonna was in favor of them citing that musicians when on stage acted and this was just a different medium. Fitting that she would make such a statement because Madonna was a pioneer of the video every bit as much as Michael Jackson.

If pressed to find an end for the music video as an art I’d point to Milli Vanilli’s efforts in 1989. They were two dancers who were hired by a record company to lip-sync their way to fame. They won a few Grammies and were found out in 1990. After that point the packaging was no longer hidden and videos became less and less about anything but putting visuals to a new single. But the music video was already a staple and here’s how it came about.

Experiments like David Bowie’s “China Girl” soon became more refined, and even cinematic, like Madonna’s homage to Marilyn Monroe in “Material Girl.” There was the irreverence of The Cars in “You Might Think” and then there were masterworks in the genre as well. One of the best videos of the 80s is undoubtedly Billy Joel’s “Pressure” it’s a visual romp, with images that add to the despair and, well, pressure of the lyrics, nothing is really explained by the lyrics and the images don’t mimic the song. It’s truly great. Billy Joel also managed to cram all of Americana since the 1950s in a three minute video for “We Didn’t Start the Fire” it is such a kaleidoscopic approach to a song which is literally going over world events while we get the portrait of a household changing while the world around it burns down. 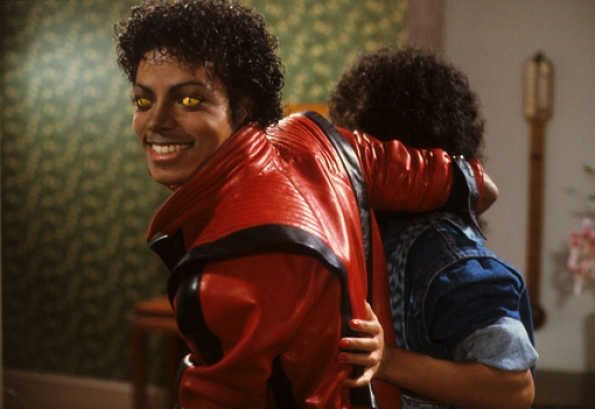 Michael Jackson’s “Thriller” is probably the most important video in music history. It was treated and packaged like a film. Jackson got John Landis (An American Werewolf in London) to direct it and there was even a making of special. Nearly all of Michael Jackson’s other videos are better but this is the one that set the stage for how he approached them. It is labels and artists merely only looking at his videos as singing and dancing numbers that have bred a lack of originality and the pathetic state of the music video today. No one has to given as much thought to narrative and production since and are only concerned in the superficial most of the time, unlike Jackson.

Madonna, meanwhile, love her or hate her, has always been doing something different. In the controversial “Like a Prayer,” she falls in love with a modern day martyr who is accused of a crime he didn’t commit. In “Open Your Heart,” she’s a stripper who becomes a boy’s obsession, in “Express Yourself” she leads a revolt in a video that was based on Fritz Lang’s Metropolis, in two videos shot in black and white “Vogue” and “Oh Father” she takes two different approaches celebrating sensuality in one and lamenting a death in another.

If and when another media savvy and quality performer comes about the music video may be revived. It is still an art form with a great deal of potential to entertain because by its very nature it combines two of the most powerful elements in entertainment: music and the motion picture. The music video is for the most part a marketing tool, but every once and a while it does spasm and let a bit of art come out.