Note: This piece contains in depth story analysis. It is not recommended reading if you’ve not seen the film.

We’ve taken a very broad look at the 80s. Now I want to take a closer look at five films that in their own unique way captured a different part of the 80s flavor. In my opinion, they are at least great pieces of entertainment, and on some level great films. One film The Neverending Story I rediscovered as an adult; one, Parenthood, I saw as a child, the other three I saw for a first time as a mature viewer. Each of them capture the character and magic of the 80s in their visuals, plot and themes and in such a different way I’ve included them all here:

This is a film adapted from a book, which was a phenomenon written by German children’s author Michael Ende. It was produced entirely in Germany with an English-speaking cast thus the official title of the film is Die Unendliche Geschichte. The film was directed by Wolfgang Petersen. This was, in fact, his follow up to Das Boot. This is a film I watched anew after many years of not having seen it anywhere. I first saw this when I was in the fourth grade. In fact, it was screened to us before we went on a field trip to see the sequel. The next time I saw this film again was a year or two ago on cable (as of this writing). I was absolutely amazed by the sheer fantasy and wonder of this film. The affect this film has is timeless and perhaps it’s even more profound now.

The tale is about a boy named Bastian (Barret Oliver), this name does carry symbolism as it is similar to bastion, and our protagonist lives in a dream-world. Ironically, he will visit a world of fantasy and there will be created another great symbiosis of the 80s. The difference between adults and children is also drawn out right away in this film. His father (Gerald McCraney) yells at him because he was drawing horses in class. Bastian corrects him and says they were Unicorns and his father doesn’t understand what he said. This is fundamental dichotomy: Adults lose their imagination and prefer pragmatism.

We see the plight that makes Bastian escape to his fantasy world when three bullies accost him. As fate would have it, he stumbles into a book store run by Mr. Koreander (Thomas Hill). Barret Oliver was a young actor of some note in the 1980s, he was no Henry Thomas but he had some good performances, this one was not especially convincing. It is especially weak when he challenges Koreander saying he does read. This meeting introduces one of the many towering concepts these ideas are amazing on their own but we find them all here in one gem of a film. These concepts are: 1) A story that has no end, 2) Fantasia is the world of human fantasy and has no borders, 3) Fantasia is starting to die because people have begun to lose hope, 4) The Nothing, 5) The reader is actually part of the story.

Great concepts are essential to a good fantasy and here we have it five great ones. I will expound on them now. Obviously the narrative within cinematic context must end but the idea of this book Bastian finds doesn’t is that everyone who reads it forms the story. All the imaginations of the world form their universe; it’s great. The first example of the great production design is the book that contains The Neverending Story. It has on its cover two snakes that are eating each other which give us an alternate symbol for eternity.

The story he experiences (isn’t that what we do with the very best stories, experience them, we also don’t want them to end) takes place in Fantasia which is the world that is created by the dreams of human beings. What’s great is that there is an inference that we will identify with this story because everyone who reads this book will shape the tale and they are ultimately the ones who will save Fantasia.

All this talk of saving Fantasia leads me to the next great idea. The Nothing is literally nothing, the film explains this right away “A hole would be something no it was, nothing,” the Rock Biter says. The Nothing has come about because people have started to lose hope and have stopped dreaming. “And people who had lost hope are easy to control.” The reader, Bastian, must complete the story such that Fantasia can be saved. Thus, we can also infer a grander vision that every time someone some one stops dreaming part of Fantasia dies. Its fate is always in the balance.

The reader’s active participation in the story is also a great touch. Everyone at one point or another wanted to shape the story they were reading. This is a great piece of fantasy and in this manner the film has two heroes: Atreyu (Noah Hathaway), who goes on a classic fantastical quest to try and save the Childlike Empress, whose death would end Fantasia; and Bastian, who manages to recreate Fantasia even when there was only a speck of sand left just by the power of his imagination! This also creates another bookish film a lá The Many Adventures of Winnie the Pooh which is less a cinematic adaptation but embracing of two separate art forms.

The flow of this story is unbelievably smooth and quick. While it’s a little over 90 minutes long a bad or poorly paced 90 minute film can feel like it’s two hours long or more. We are introduced to the idea of the nothing by an assorted cast of fantastic creatures: a night-hob, a racing snail and a Rock Biter, a rock-formed creature that eats rocks. They travel to the Ivory Tower, this is one of the magnificently designed sets of the film, even though this first shot is probably just a matte painting it is just fantastic. Then there are The Swamps of Sadness, Engyebook’s Hut and the Ivory Tower itself are as other examples of fantastic sets made for this film. At the Tower news of the Empress’s illness and its connection to the Nothing are given and a brave warrior is called to go on a quest to find the one who can defeat the nothing, one who lives beyond the boundaries of Fantasia.

Atreyu proves he’s the one who’s meant to go on this quest; Noah Hathaway had a great fantastical accent which seems as if it was an amalgam of British and Australian speech patterns. Bastian immediately identifies with Atreyu and we identify with both of them in turn. It seems the amount of symbiotic connections this film makes is endless. The two snakes turn out to be the AURYN, a magical amulet that protects the wearer. Yet another classic fantasy element; it’s such mishmash and yet the story itself is so much more unique than most 80s fantasy like Legend, which was purposefully a combination many fantasy epics.

Atreyu journeys through the Swamps of Sadness where if you let the sadness that emanates from the place get to you, you will sink into the mud and die. He is brave and makes it but his horse Artax dies. This is a huge event not only in the film’s dramatic context but production-wise this is a bold move in a kid’s movie where only someone like Disney usually had the guts to do something like that. He then encounters Morla the Ancient One. The dialogue in this scene is great. Morla keeps referring to itself as “we” and Atreyu asks “Are there more than one of you.” The response “We haven’t talked to anyone in so long. So we started to talking to ourselves.” Morla later starts sneezing because it’s literally allergic to youth.

He’s told he must go to see the Southern Oracle, which is more than 10,000 miles away. As Atreyu walks dejected through the swamp, we see class at Bastian’s school is no longer in session but he stays to continue reading because he can’t put the book down. Atreyu is taken most of the way by Falkor a full animatronic luck-dragon that was 43-feet in length. There Atreyu meets Engyebook and Urgl an old couple who fight incessantly. Engyebook is a scientist and does everything experimentally and never takes a chance in his life. There are two gates you must pass before reach the Oracle are giant twin sphinxes, these are another pair of great symbolic moments. The premise of the first gate is that anyone who doesn’t feel their own worth is destroyed by the gate. Beams shoot out of the sphinxes eyes and kill the unworthy. We see a man in armor get burned. This film stayed PG oddly enough despite the fact that we see his face burnt to a crisp and the statues have large exposed breasts. Atreyu makes it through after some trepidation and the second gate is the magic mirror gate where he must come face to face with his true self and who does he see in the mirror but Bastian. This is the second time Bastian is given a hint that the people in the story know of him. The third time the Empress pleads outright with him telling him every place Bastian had followed Atreyu and pleads for a name.

This film has developed quite a cult following although it had quite a good run at the box-office. There are many websites online dedicated both to the film and the novel. The seemingly great mystery of the film is what Bastian’s mother’s name is because this is the Empresses new name. He yells it out the window during a storm and it seems purposely drowned out. On the DVD there is no subtitle to tell us what he says even when you have the feature on. This is one of Petersen’s greatest touches. It could be any kid’s mother’s name, even though if you listen carefully you can decipher it (hint: it’s the same thing he says in the book.). His best work was in adapting the novel to film. He didn’t try to adapt the whole thing, but saw a definite point where the novel stops telling one story and starts telling another. At page 180 of the novel Bastian has saved Fantasia, in the book he goes there and it wanders off into battles with Xiathis, which are used and terribly adapted in the sequel. Petersen had great foresight and knew, this is the best part of the book, and this is my film, Ende can keep the rest. 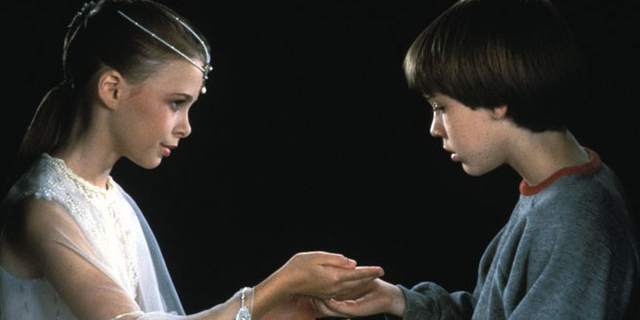 The Neverending Story is a great departure for Wolfgang Petersen. It is also a monumental fantasy, and perfect for the 1980s where it seemed people were starting to lose hope, and they had some good reasons to, but the cinema was trying to give them something to hold onto. The novel was on the bestseller list in Germany for four years and the film became a phenomenon in and of itself. It’s a little gem that could only have been a product of the 80s.

–Miraculously the film does succeed as Oliver is a supporting player. The film does have kinks in its armor like why an attic key is so easy for him to find in a school but it still works and you’ll see why.

–In Ende’s novel the land is called Fantastica but it was changed to Fantasia in the film so that people would have a name they could identify with and also to make allusion to the Disney film.

–Morla is a giant tortoise who literally is the Shell Mountain. It’s gender is never established one way or another, however, if forced to guess I believe Morla is a woman.