Warning: if for some strange reason you have yet to see Unbreakable you should before reading this, there are spoilers within.

When I saw that Bubbawheat was doing a blog-a-thon covering actors in comic book movies, I thought it was very appropriate. Now there generally is a delineation between comic book and superhero films, and there is value at looking at individual actors who have appeared in this kind of movie multiple times. However, one of these roles played by Samuel L. Jackson is in a film that toes the line very carefully.

Now, when referring specifically to the superhero film it’s especially interesting because we are currently immersed in a seeming golden age of the the Superhero film. There were occasional bursts of greatness, but now these kinds of tales are attracting not only the state of the art techniques, not only A-List actors, but also top directors and writers to the cause creating richer, more human stories, that are still filled with incredible spectacle. In short, we’re getting a much more complete film than we ever thought we were going to get from the genre.

However, being in the midst of such an age sometimes we don’t necessarily stop and look around to see how we’ve gotten to where we are. Looking at some actors who have participated in many of these films can start to show us some of the indicators of the rise of this subgenre. 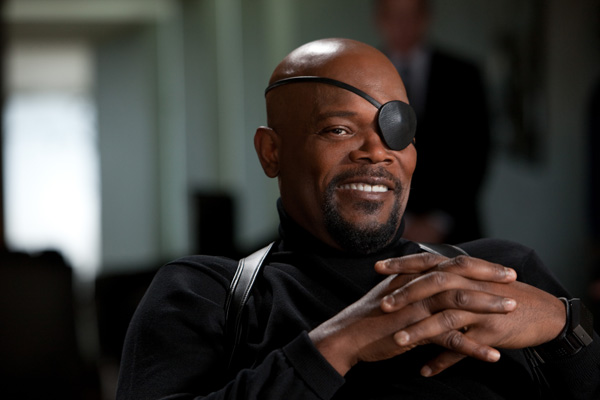 Samuel L. Jackson is a man who has been myriad films from record-setting blockbusters to small indies he believes in and wants to help out. Sam himself may have a type and a persona, however, he doesn’t allow that to pigeonhole the kind of film he does. It’s funny that I find myself writing about Sam Jackson again so soon after I named him 2012’s Entertainer of the Year, but a line I wrote in that post came back to me as I scanned the list of candidates for this blog-a-thon. With regards to his still-ongoing portrayal of Nick Fury in Marvel’s Phase One, I parallel it to Alan Rickman‘s work as Severus Snape.

Aside from the fact that Rickman appeared in one series, and Jackson’s portrayal of Fury is part of a universe of franchise films, there are really a few similarities of note. If you’re looking just at the film textually, and not inferring any pre-acquired information from the comic books, Fury’s presences in each film is a necessity, but it’s nebulous. We try, as we go from tale to tale, to ferret out his nature and his intentions. Ultimately we see his main desire in Phase One is the creating The Avengers. However, and there is some follow-through on this in The Avengers itself, being the head of an intelligence organization he does dabble in a gray area much of the time, and that was set-up bit by bit in the films leading up to The Avengers and expanded there. I can only imagine that as the Marvel films proliferate that his character will continue evolve and become richer.

Now, make no mistake about it Fury is most definitely on the right side of the divide. The other of his comic book film characters I am taking a closer look at is Elijah Price in M. Night Shyamalan’s Unbreakable. Now, this character brings to mind another statement I made in writing about Jackson’s entertainer of the year award, in the four films I cited in that award (The Good Samaritan, Meeting Evil, Django Unchained and The Avengers) he was a protagonist in two and an antagonist in the other two. He usually splits that fairly. Now, Price’s confrontational and difficult demeanor is apparent throughout. The twist, when Shyamalan still did them, is that views himself as the super-villain in his delusional relationship with David Dunn (Bruce Willis).

This was a film well ahead of its time. There are quite a few reflexive superhero tales around now from the well-known and well-done Kick-Ass, to lesser known ones of lesser quality. However, Unbreakable, about which sequel rumors persist to this day is the kind of film that really could, and still can, have a sequel blow up and be something far greater than the original.

I’m not a critic of Unbreakable. I do like it, however, it’s not a film that’s impeccably rendered like The Sixth Sense is, or even like Shyamalan’s earlier film Wide Awake is. Jackson is a self-proclaimed comic fan, Ubreakable was his first title in the milieu and his filmography since then bears that out.

As either the persistent, hovering-around-the-periphery lynchpin on the Marvel universe or the injury-riddled, megalomaniac always seeking the yin to his yang, Samuel L. Jackson has always had an aptitude for injecting superhero films with life, for creating layered characters with quite a few notes to them. As the subgenre progresses one can only imagine Jackson going along with it and adding his own unique flavor to the entries to come.