In the cinematic equivalent of word association, the first movie that Finding Neighbors reminded me of is Scott Pilgrim vs. The World, which in many regards this film is the antithesis of. The reason this comes to mind is because of the obvious, occasional attempts at blending the graphic novel form, and some animation, with conventional live-action film this film makes. However, while Pilgrim’s video game/graphic novel-inspired flashes are necessary world-building here the artwork stands in lieu of montage, and as a sort of white elephant as the Flesh Fair barker in A.I. put it (“originality without purpose”). And even that very originality is dubious when you get beyond the fenestration to the narrative and the personages below.

The film’s presumed need for such affectation can be found in its synopsis. It centers itself around Sam Tucker’s (Michael O’Keefe) creative and mid-life crisis and his inability to connect with or even really talk to his wife, Mary (Catherine Dent). The flashpoint, such as it is, for the film is his now six-months overdue latest graphic novel. A lateness that has his publisher contacting their counsel and his agent having a conniption.

The film’s dealing with Sam’s mid-life crisis occurs mostly through his lack of forthcoming with issues and concerns that come up in his personal and work-life. This is an idea easy to identify with but issue is rendering it such that it’s interesting to watch. The built-in formula becomes quite tiresome. One entire subplot, that of his vixen neighbor Sherrie (Julie Mond), while necessary for the character is quite strange in its only slightly ascending stakes, and oddly disproportionate amount of screentime allotted to it. Much better realized is the main subplot, his burgeoning friendship with Jeff (Blake Bashoff). 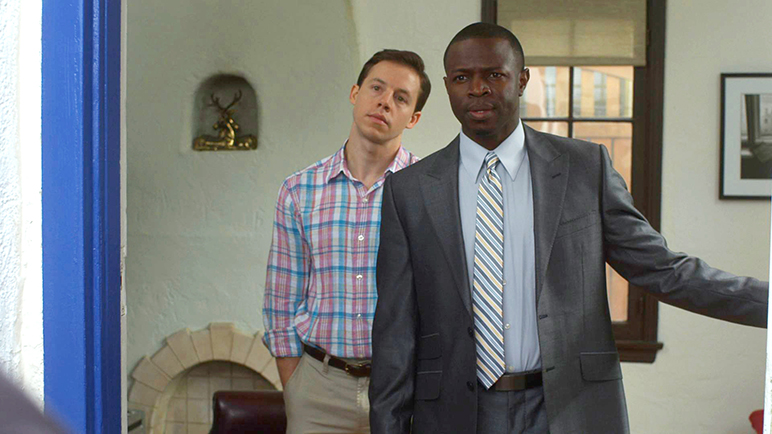 It is in these scenes, and the climactic fights, and discussions, that O’Keefe is at his best, but Bashoff ultimately is the highlight of the film. While there are some smiles, and comfort to be found in the resolution this film finds it’s a bit predictable also.

Finding Neighbors is a fitting title because it’s in getting to know others that Sam really starts to examine his life, relationship, art, and struggles as he opens himself to let others in. In that the arc works well to building the bridge that will allow the eventually reconciliation and repentance for past omissions of emotion and attention. However, the road to get to that final destination is ultimately not one worth traveling.

Finding Neighbors is available on DVD and digital platforms.