One of the better ways to examine the progression of cinematic history I feel is to look at similar films and compare them. As I was watching this film, as absolutely enthralled as I was by the collision course that was set up; I got to thinking about The Great Train Robbery (1903). Now, granted, there is little that this film holds in common with a title 107 years its senior aside from trains but consider this.

The audiences in 1903 literally ducked out of the way when a train on screen plowed right at them and similarly ducked when the robber shot right at them. What tremendous progress both technically and with regard to audience sophistication has been made. When you look at this runaway train film, however, many classical techniques are what make it work.

Mainly, the editing puts this film over the top. The oldest and most tried-and-true technique in film. The film does set up the danger: this train with X-thousand tons of haz mats is likely to derail in a town of 40,000 or so, however, a number that large in a cinematic context is abstract. Who do we follow and care for? Frank (Denzel Washington) and Will (Chris Pine) who will be chasing the runaway train down and Connie (Rosario Dawson) who is the Supervisor trying to manage the crisis. Yet this doesn’t truly create most of the tension. It’s the cross-cutting that does it. It’s a news helicopter following, the runaway catching speed, showing an on coming train, a switch is made, they nearly hit one another. 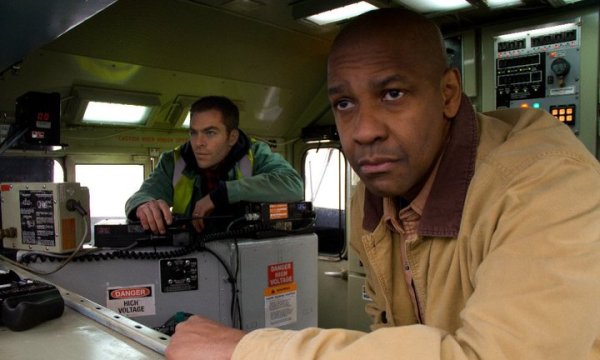 And there are situations similar to this throughout. The film builds tension-filled situations throughout and even the littlest mistake by anyone has consequences.

The characters are basically assembled but as mentioned before there is concern for their well-being and a rooting interest is established. It’s not even the facts that make us identify but how they are conveyed. Will has a skeleton in his closet a terrible mistake he made but we get to know him first before we learn what it is. We learn Frank is a dedicated, very capable engineer and then learn of his job situation. We can see Connie is wise, compassionate and courageous through her interaction with her superior.

The cast is vital when you’re dealing with archetypal characters such as these. You need not only talented actors but also charismatic one who will add and unwritten dimension to these people. Denzel Washington’s dialogue is frequently repetitive but there is a presence and authority to his delivery that adds to who Frank is. Pine has a tough look but a vulnerability which is crucial to his part. Dawson has a no-nonsense-ness about her that is inimitable.

The film uses news flashes as shorthand to disseminate crucial information and also to raise the stakes as necessary. Thankfully, this tactic which could wear thin if used too much is used just enough. The one place it gets overly involved is the new helicopter becomes too much a part of the action at a crucial point and becomes an obstacle to our heroes.

To cap it off the cinematography and scoring are both very strong and add to the suspenseful ambiance.

Unstoppable is a nail-biter in the truest sense of the phrase and is a must-see for those who appreciate expert editing.