When considering the Backstage Blogathon, as to whether or not to participate in the first place, there was very little to consider. As it comes to wanting to choose topics that allow me a more personal approach than most this theme does well.

Being the Backstage Blogathon it allows me to talk about my relationship with one of the performing arts. In this case, it is the theatre. This history is one with deep infatuations and long absences.

My first exposure to theatre really was in grade school, where, as most children have been, I was involved in two school plays. First, there was a version of Peter Pan, where despite my willingness and desire to be Pan, the older, predicted actor was chosen. Later, I was in something called The Wishing Well. Though I have since found cast pictures I have not as of yet tracked down which play this is and who exactly is the playwright.

These sojourns in grade school were the only ones until after I was in college where by chance I got involved in a community theatre, and over the course of four years did sort of a self-run education in theatrical arts where I eventually wrote and directed some plays of varying lengths

My stage work may be one of the next projects I tackle in my aims to self-publish a great number of my works. More about these shows can be read here and even seen in part here.

This more or less brings us to the present and my selecting Our Gang Follies of 1936 as my title for this blogathon. It was the second time, where I signed up for one of Movies Silently’s great blogathon’s and saw something on the wishlist worth nabbing. In this insistance one motivation was the opportunity to see another title off the Little Rascals box set, while jumping chronologically and also scratching off one curiosity.

The curiosity being that I got to put to bed any misconstrued notion I still carried with me from childhood over what follies were in this sense. My first exposure to the phrase as a child were the NFL football follies – so, I knew of it as a euphemism for a mistake. When ads for revivals of the Ziegfeld Follies and the like came around I was confused. Eventually, I got it by osmosis but onky recently confirmed it’s merely another way to describe a theatrical revue.

So, on to the version by Hal Roach’s Rascals… 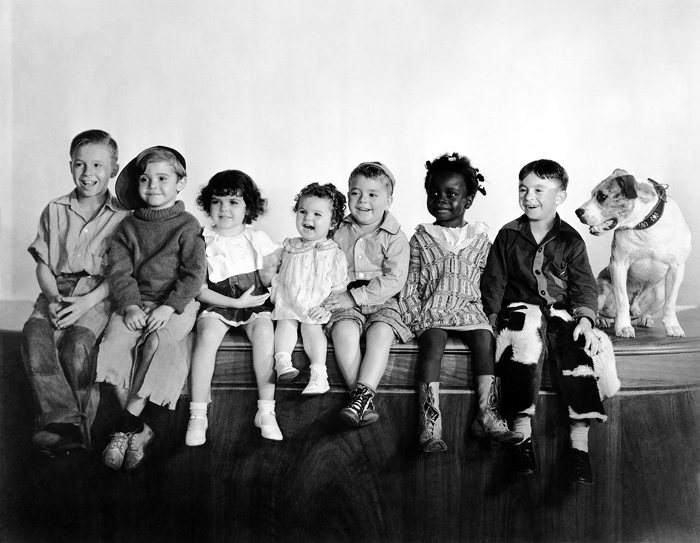 MGM’s series of short subjects were, of course, popular for years. These 2-3 reel comedies were later repackaged for television where their longevity was prolonged. This was one of the series of shorts I seem to remember getting some exposure to on Saturday mornings via TCM. That was some time ago and more recently I’ve been wading my way through a large, yet not complete as it claims, box set.

This particular short is later down the line than I’d gotten, and thus, the first of Gus Meins’ directed shorts that I was privy to viewing. In brief, the short deals with the Gang, starting with Spanky as the barker, seeking to gather an audience to watch “6 Acts of Swell Actin’”.

The cast is large and wholly made up of kids. The tale is musical, yet more more enjoyable than most could expect.

Some of the acts include: tap-dancing bellhops, Alfalfa singing “She’ll be comin’ Around the Mountain”, hula girls, a kickline, a trio of singing sisters, Darla singing (sounding better than she has any right to. Voices as young as hers, especially for girls, are usually quite piercing even when in tune), a skeleton dance that hearkens back to silent film days, and the oft-delayed Flory-Dory Sixtett number.

As a side note this was my first time watching the actual Buckwheat in a short. My first exposure to him was Eddie Murphy’s version.

The gags in this short, unlike some of their shorts, are varied and plentiful: there is a monkey shoeshining, cross-dressing, animal hiding in a bodice, things go wrong and it’s live, hiding in hay, running skull, gunshots at boots, and animated eyes.

It’s no wonder there was a sequel was a sequel to this short a few years later. This version is well done and allows great variety in scenes, different talents to be displayed and many jokes.