If Legion had been released in 2009 it might have dominated the Most Asinine Shots of the Year list. It still might get to have its moment in the sun with doozies like: a flaming cross burned into the side of a building, the Incredible Stretching Ice Cream Man Demon, The Old Woman Crawling Up the Walls and an armored Gabriel walking through a glowing doorway. However, there are the occasional positives and conversely worse things than just those shots in the mix.
It’s a film which tries to walk the tightrope between blasphemy and gutsiness and falls off onto the wrong side. When there’s an overtly religious theme in a movie, and you challenge the conceptions that even the most lapsed Christian might hold, then you’re fighting an uphill battle and you’d better execute the story to perfection and make people forget that they have a hard time accepting the scenario you’re trying to portray. This is the ultimate suspension of disbelief because you’re taking one citation (Psalm 34:11) at the head of the film and asking the audience to accept that as the only gospel truth, for lack of a better term, when it’s about to change a lot.
Considering the story issues that exist, the execution both technically in terms of the edit, cinematography and on the part of the cast is rather good. It wasn’t great, especially in terms of the edit as the film could’ve been tightened up a bit but it certainly wasn’t as bad in that regard as it could’ve been.

The theology of this tale is ultimately very flawed, and yes it’s a fictional tale, however, when considering the implications it makes it’s hard to deal with. There are some spoilers ahead.
The story is about the Archangel Michael disobeying God’s order, which is to assist in the annihilation of mankind, including the murder of the woman who is the bearer of The Second Coming. It is certainly not unprecedented within the pages of the Bible to have gruesome and bloody stories, however, this tale not only portrays God, who is not seen but he is heard, as cruel but as one who is indecisive. Think of it eight months before He decrees this young girl will bring His son to the world anew, and then he decides “You know what? Never mind, people don’t deserve Him. I’m going to end the world instead.” This is literally end it, no Noah, no ark, nothing. This is problematic for one seeking to engage and be lost in this story.
As a side note where is the Vatican’s review of this movie? It seems like this is the kind of film they would want to deter people from viewing more so than Avatar. I mean there is a compulsory happy ending but the plot does infer that God Himself is trying to kill an unborn child, which last I checked, is a sensitive subject. 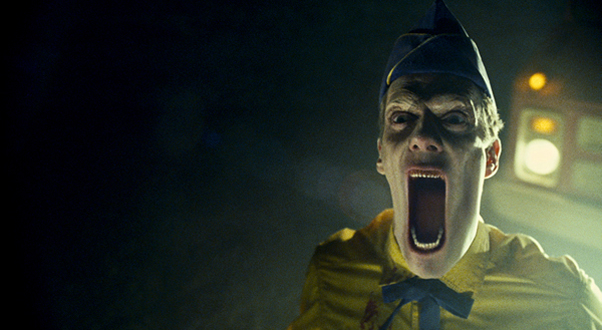 There are other shots and images that are blasphemous but considering that the whole plotline is dubious at best, in those regards, they are hardly worth mentioning in detail.
Smack dab in the middle of the movie there is an overly-long expository sequence where the characters that are trapped in this Diner at rest stop are talking in pairs and exchanging their life stories. Granted I will not knock the film for trying to build character, however, this was a clumsy and uninteresting way to go about it. When a film is supposed to be horror/action a very long lull is harder to deal with than under-developed character.
The casting of this film was rather interesting full of people who left you wondering “What are you doing in this movie?” There is Dennis Quaid who is still as good as he ever was but has not done a really good film in a while and did this on the heels of last year’s painful Pandorum. There’s also Lucas Black, who was last seen by many in The Fast and the Furious: Tokyo Drift, but is more well known from Sling Blade. He is still quite good and never got a breakout and this might not be helping. Then there is Paul Bettany as good as ever as Michael but again “What are you doing here?” was what came to mind. Tyrese Gibson and Charles S. Dutton are also rather good in this film. Of course, the casting can’t be perfect with the inclusion of the freakish androgynous kid and the more-over-the-top-than-she-should’ve-been Old Woman.
In conclusion, this was a better film than expected but still had too many issues with the plot and concept that execution could not overcome. Even with that execution being better than average it’s still well worth missing.
3/10