This is a film filled with plot holes but what was ultimately most distressing was that it actually sent this critic back to Syd Field’s Screenplay seeking a citation as if arguing a legal case and seeking precedent. The reason for this is that it seems like a film confused about who its protagonist is.

The answer ended up being found in Robert McKee’s Story “A protagonist is a willful character,” “The protagonist has a conscious desire,” “The protagonist has the capacity to pursue the Object of Desire convincingly,” “The protagonist must have at least a chance to attain his desire,” “the protagonist must be emphatic; he may or may not be sympathetic” all of these things seem to describe Gerard Butler’s Clyde. Until we think about this point – “A story must build to a final action beyond which the audience cannot imagine another.” Herein lies the ultimate failure, in part, somewhere along the way even though we started the film with Butler’s character it wants us to shift allegiance to Jamie Foxx’s character because to have Clyde win would be politically incorrect. The film sells a bad bill of goods dressing itself up as a modern day Death Wish but ultimately it doesn’t have the guts to be so. In part because he targets authorities and in another part because he doesn’t use hand guns. Ultimately, it was made worse for it. Also, Clyde’s failing was avoidable and uncharacteristically stupid, which is a direct contradiction of McKee’s last axiom.

Even accepting that we should switch allegiances as a given, what added incentive is there? Foxx’s character is just as superficially drawn, if not more so. He and his wife fight because he works too much and he misses his daughter’s recitals. Sounds very common. Aside from Clyde sending the DVD of the first kill to their house and his daughter watching it, for too long, there was never a direct threat made against his family. A bigger scare would be required to make the switch easier. 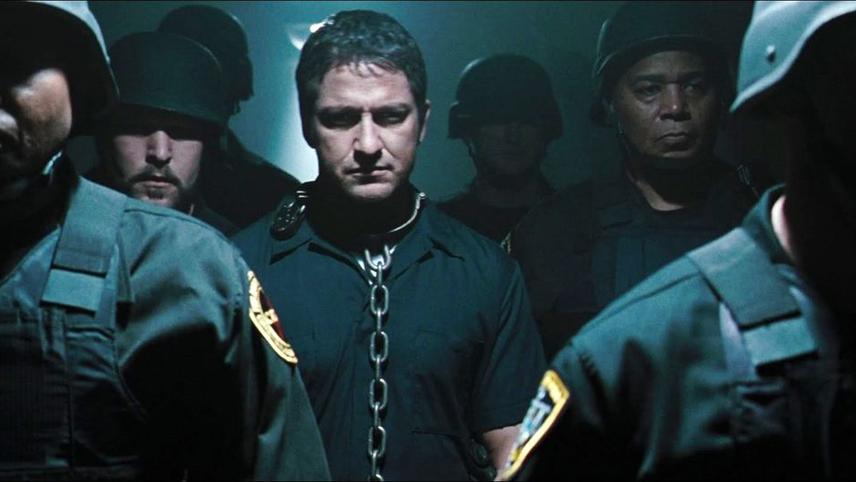 Granted considering both protagonist and antagonist are family men Foxx’s family is never truly threatened but there were other possible end games, however, the other problems with the film are already inherent before the end game.
Identification with Clyde’s character and his plight is short. In fact, if you’ve seen the theatrical trailer you’ve seen a majority of the first act and had the most effective kills spoiled in part already. Both characters end up being rather simplistic. So much of the film was heavy-handed in terms of dialogue such as Darby’s, the man who plea bargained, dialogue when he was sentenced. Some events are odd and hard to swallow like Foxx forgetting Darby’s name after attending the execution of his accomplice, Clyde having tunnels into practically every prison cell from a nearby industrial building and how Clyde’s holdings are all found so easily and so on and so forth.

It’s possible to go on listing problems of this nature but after a while it becomes pointless. Butler and Foxx are fine but they never have enough to really work with to elevate this tale. It’s ultimately a cheap action film with easy ill-defined answers for everything and an anti-climactic ending regardless of where an audience member’s allegiances are. This film also adds to a legacy of writer Kurt Wimmer that seems to prove that Equilibrium, one of the best films of 2002, was the exception and not the norm in his work.