The Warrior’s Way starts with a pretty basic set up. Our protagonist who has been virtually eliminated an entire clan save for one, a baby girl, can’t bring himself to kill her and flees. The differentiation in this tale comes later on in the tale as we learn more about Yang (Dong-gun Jang). We learn about him in perhaps the most effective form of flashback which is the quick and bifurcated. We are shown little of his upbringing but see just enough to see where at a young age he had to make a decision about what he was to be and now he had chosen a different path.

Which brings us to another positive point in this film is that you know all kinds of chaos is coming in time. It is set up pretty early that there will be two factions of enemies rolling in. The issue is one of pacing while The Colonel does have a prelude to the massacre he intends, which is rather effective there is a lull both before and after. The training of the townspeople is a necessary exercise but takes too long and the final clash could be a little more mish-mashed than it is.

However well-executed the final clash is there are stakes in both which matters. lynne (Kate Bosworth’s) tale of her past is also well-rendered so at least its not just gunfire and swordsmanship for their own sakes but there is some emotional investment involved.

Truly, the tale needed to be told as such because as a standalone martial arts film or a standalone western there just isn’t enough there but together it works and makes sense which is what you’re looking for. 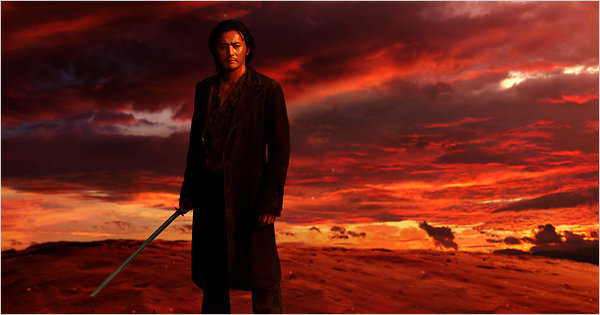 There is a tremendous amount of stylization in this film but it all works and doesn’t become a distraction or an eyesore. Artificial vistas or not they are composed to enhance the story and not be the story. There are enough actual elements to make the film work.

They are also offset by the type of oddball town that Lode is designed to be in this story. For all intents and purposes the only residents remaining in the town are circus folk who don’t travel but are seeking to finish a ferris wheel which will be their carnival’s claim to fame. The film does take the time and make some of these characters prominent enough that you know them by name and a little bit about them too such that they’re not just peculiar set dressing.

All in all this film is an enjoyable enough piece of escapist fare which although it can been much better and brisker is still quite good.