This is another post that was intended as a Mini-Review Round-Up entry, but then grew legs and so I decided to post it separately.

To be completely honest, though I knew about the upcoming slate of 30 for 30 films for this fall; I was caught unaware by this installment of the ESPN Films series under the banner of SEC Storied.

And apparently this was not the debut installment, but rather part of plan to have four conference-specific titles per year. However, when the subject of the Manning family came up it’s not a wonder that I heard about about it and then saw the documentary.

It’s only now with hindsight that I could see that my fascination with this family has gone on longer than I realized. I was too young to witness Archie Manning’s career as it was happening, but I remember seeing footage of the fleet-of-foot gunslinger left on an island and run ragged when playing for the mostly hapless New Orleans Saints. In fact, in my nameless-player, league-branded NES game he was a large reason I “created” my own similarly gifted and bedraggled field general for the same team. 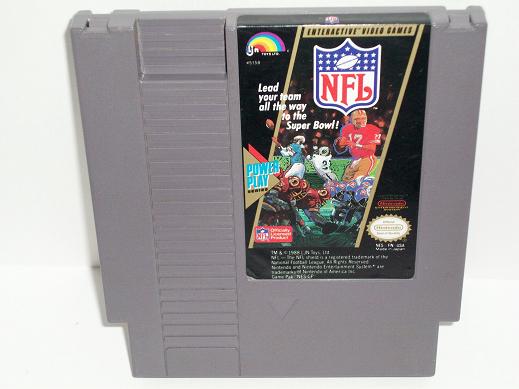 Later on I, of course, became aware of Peyton in his college days and when he joined the Colts, though I am not a Colts fan, that would be the team I’d most consistently watch (besides the my own) to see him play. Peyton Manning is must-see TV.

Almost anyone can note how the story of the Manning family, at least in football terms, is like a fairy tale. However, it becomes a bit more so in my case. Of course, part of the fascination in watching Peyton play is not just his prowess, but a bit of envy, “Why can’t my team’s quarterback be just a little like that?”

I became even more aware of the fact that Eli was a college quarterback than I was of Peyton. Partially because he was the little brother. I think he was a sophomore when the pipe dream of his ending up on the New York Giants entered my mind and I laughed it away as an impossible notion. In fact, I never entertained it as something tangible until rumors started coming around about his not wanting to play in San Diego. 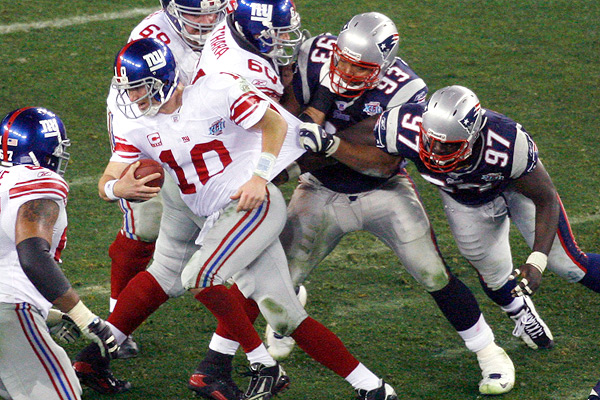 I can’t remember who else was in the running but the Giants weren’t the only team to need a quarterback that year, but were the only one’s who could pull the trigger on the deal. Eli Manning was a quarterback for the New York Giants something less than two years after I had the crazy idea. Not only that but later that same ill-fated 2004 season I lucked into a ticket for a late-season, virtually meaningless game against the Atlanta Falcons. Eli’s first start was a close-run loss wherein I screamed myself hoarse. After that history it’s not a wonder I was one of his few staunch-yet-silent-supporters as he and the Giants struggled to get their bearings. Despite the start to this season, two borderline-miraculous Super Bowl runs later, what’s not fantastical in that story? 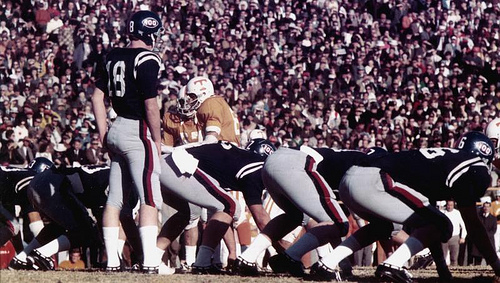 As intimated above the footballing aspect of the Manning family seems to be a fairly tale. Yet I long ago learned of the unfortunate circumstances Cooper Manning faced in his freshman year of college. However, what makes this an interesting tale is that there are in Archie and Cooper’s stories highly unfortunate events. The first molds Archie in his personal life as a man, the next fuels Peyton in his will-to-win on the field.

So there’s a redemptive aspect to Peyton’s section of the film. Yet, although brief there is one to Eli’s as well because of the perceived slight the state of Mississippi felt that Archie and Peyton had levied upon them. Though there was no such slight and the reasoning each had for their actions were justified.

In editorial terms there is a slightly repetitious nature to the film. However, that’s one of the few things you can quibble about. There are a few brief, well handled re-enactments. The stills, pictures as well and the one-on-one interviews give you a more complete version of the tale than if there had just been game footage involved.

The college football, the Southeastern Conference, slant on the story allows it probably a better structure than one that took in more of each of the three pro careers involved and it ends up working better for it.

I could almost disqualify myself from a rating based on the aforementioned personal history, but you can consider that the grain of salt portion of the review. It still does work and I think, since it is a family story even more than a football one, and Olivia is interviewed quite a bit as well; non-fans will also enjoy it.