Don’t You Recognize Me will be a sporadically posted theme wherein I briefly highlight an early role of a now well-known actor. Typically, it will be one where I didn’t immediately make the connection, hence the title.

Society has become a bit more instantaneous in the internet age, very preoccupied with what’s current and what’s next and not as much with what’s past. It’s a generalization but this does apply to the world of film a bit too. Therefore, career trajectories sometimes will sneak up on you. At times I’ll see a name in a casting announcement and only in the piece connect a name with a face. Evans’ case is not quite that, but it happens a lot.

The journey an actor takes from recognizable face to known name is still, in most cases, one that is many years in the making. As I hearkened back to Not Another Teen Movie I checked his IMDb and realized that I did see him since, even before his second more successful superhero incarnation, in Scott Pilgrim vs. the World and The Nanny Diaries but this is the one I always think about. 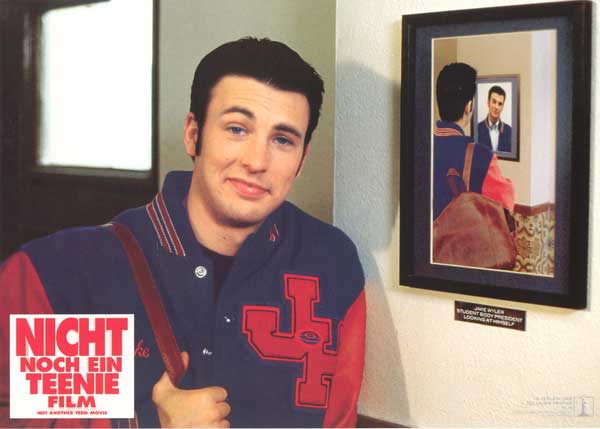 It’s a far cry from the kinds of roles that he’s playing now, but in a lot of ways Not Another Teen Movie is the last wholly successful parody I saw. Acting in a parody requires serious chops. You find yourself in the most ridiculous, outlandish and unrealistic situations placed on film and not only do you have to suspend your own disbelief as a performer and play scenes without commenting on them, but you have to sell the audience and make them suspend it too, at least to an extent. Evans is the love interest Jake Tyler, maybe the only highly-skilled high school back-up quarterback in the annals of teen filmdom (“Mr. Not First String Anymore is not first string anymore” as Austin, his rival, puts it). He’ll be the one who is at the epicenter of the broadcast, cheeky bet to turn the glasses-and-a-ponytail-paint-on-her-overalls Janie Briggs to be prom queen, and succeeds on every level.

Yet, as well as it works somehow this slipped my mind until after I saw Captain America and just before The Avengers. When it clicked it just made me smile and gave me a whole new level of respect both for what he did prior and with his latter roles. If you only know Evans now and like a good, ridiculous parody that is a bit raunchy at times check out Not Another Teen Movie. It has had high replay value for me.

Note: This film is Rated R by the MPAA for strong crude sexual content and humor, language and some drug content.