Not too long ago I was finally missing hockey enough that I decided I should watch Goon (For my rating, which will be omitted from this commentary, please go here). I had the conflicting emotions going in of having high hopes but also being somewhat guarded. As I have discussed with films set in Brazil, but made abroad, I have some trepidation when it comes to handling of subject matter is close to me. Hockey is one of those touchy subjects.

For example, when I was younger, I was obsessed with hockey (mostly with the New York Rangers) quite badly, such that I’ve had to temper that with conscious effort such that a win or loss doesn’t effect not only my day, but also the time that elapses in between. When I was younger I naturally would have had to rented Slapshot at some point. Now, the point of this piece is to discuss Goon, so suffice it to so say I was quite turned off, didn’t find it overly-amusing and didn’t think it got it. To paraphrase what Penelope Spheeris said about why she didn’t do This is Spinal Tap when offered “You’re making fun of these people,” and feeling a part of that scene she couldn’t see herself doing it. That’s how I feel Slapshot dealt with its subject matter, which is the polar opposite of how Goon does it.

I think Goon does understand, touch upon and convey so many nuances of the game that fans, and those involved in the game get that outsiders cannot and what it most amazing is that the film puts these notions in a great movie that’s accessible and enjoyable to the non-fan.

Clearly, Goon will deal mostly with fighting, as it chronicles the unlikely rise of a nobody into a minor celebrity at lower levels of the sport simply due to his prowess in fisticuffs.

While the film doesn’t get didactic about anything I feel it does thoroughly examine fighting as a part of the culture of a sport, the fabric of it really, and the mindset of said fighters. It shows the trade-offs you’re willing to make, what’s tolerated, what isn’t, momentum shifts a fight can cause; essentially the “necessity” of it.

While I, as a hockey fanatic, will grudgingly admit to the “necessity” of fighting I also cannot in good conscience leave it out of quotes and cannot just leave it at that. I think it also important to delineate that this is hockey we’re discussing and I compartmentalize. Just because I accept and understand a brutal, physical practice in a sport played by adults who agree to the risks they take on does not denote my feelings on nuclear proliferation, capital punishment or any other topic.

I think the film shows even while making spectacular out-of-this-world bouts that there are ramifications and consequences of many kinds in fighting. What bothers me most about the perception of fighting, which I hear all too frequently on debate shows when they deign to talk about hockey, is that it is allowed. It’s more accurate to say it’s an accepted practice, but it is not allowed. If it were allowed you’d have something akin to Blades of Steel, wherein only the loser was penalized, or what’s more no one was. If you fight you are assessed five minutes in the box. There can be a strategic purpose to it therefore it really is a more violent version of intentional fouls in basketball, or on rare occasions in soccer (aka football).

However, I can agree that hockey is likely the only sport wherein there are enforcers, whom you don’t expect goals or assists from, but whom you expect to protect said assets. The complaints are old, but some of the facts are new and Goon touches on the head injury issue.

With the growing animus in all sports to keep its participants safer never is the conversation more nebulous than around fighting in hockey. Many head injuries in hockey and football are typically the result of one player being either defenseless or unaware of the oncoming collision, in a hockey fight 99 times out 100, heck I’d wager 999 times out of 1000; you have both combatants know they’re about to deliver blows to one another’s head. It’s probably the clearest case of they know what they’re signing up for there is. Yet it’s the most vilified act in sports it seems, and I think what Goon does amazingly is humanizes these players, even ones that start out as caricatures. However, Doug Glatt, the lead played by Seann William Scott, is so well drawn. He’s a gentle giant, a consummate team player who will do whatever needs doing whether it be fighting or taking a puck to the face.

If the sport were to clamp down on fighting more would I still watch? Absolutely, and I think that those who argue attendance would drop don’t get it. It will only drop where there aren’t real fans of the game. With regard to player safety, I’m far more concerned about enforcement of blows to the head in the middle of a game at full speed than a fight, though I’m not going to act as if there are no cumulative ill effects health-wise there. It seems sports leagues are skewing towards legislating to avoid sudden cataclysmic injury rather than chronic ones.

Now, while I’ve been off on a tangent, what the film does is the polar opposite of what I have, which is what makes it so good. It avoids bombast and soapboxing of any kind. For example, Glatt’s rival Ross Rhea, played by Liev Schreiber, talks to him, seems like an OK guy and steals a comment he made in his speech when having his number retired, but that’s the end of that thread. They have something to settle on the ice and won’t be distracted by off the ice stuff.

The film has pretty effective action sequences and really good looking hockey plays, which go beyond your typical insert of a puck bulging the twine. The totality of the handling of the sport in the film is amazing aside from narrative, performances, aesthetic and other production choices. However, fighting, because it is called Goon after all, is at the center of it and within the sport and without it’s a hot button type of issue and perhaps what I’ve been driving at, aside from letting some things off my chest, is that it dealt with it without pretension, condescension, excuses or even glorification, it just is. It’s in the game and that’s it.

In film one of the terms you’ll hear all the time is “raise the stakes.” Put more at risk, go bigger, bolder or higher for more dramatic impact. So, yes, Glatt is a superhuman fighter, some of the impacts and injuries in the fights are extreme and he does stop a shot with his face, and several subsequent stuff-in attempts, but when the tone, details and spirit and scenarios are all right then the occasional extravagance needed in film is far easier to accept. 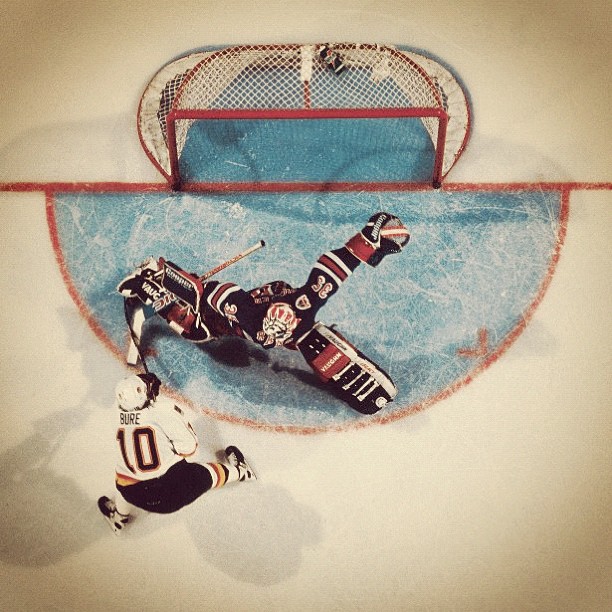 If you were to cull through all the video you could find to create a montage, as long or as short as you want, to illustrate why you think a sport is great it probably won’t connect. If you put it in the context of a story then you have a chance of even getting neophytes along. For example, I know very little about cricket but I’ve really enjoyed films about it because of the common themes I could relate to the passion, strategy, desire to play, hero worship and so one (aside from the fact that it’s aesthetically great on film). Now, if you take many elements that make a game great and combine it with a great story that anybody can sit and watch then you’ve got a real winner.

Goon‘s success is attributable to the fact that it cares deeply about its story, its protagonist and the game it’s portraying and that’s all. It’s not trying to make any other statement at all, yet, paradoxically that’s just how it makes one. Hockey is a beautiful game and if those who run the sport treat it as well as this film does then it’ll be in great shape.