This is a recapitualtion of a paper I wrote in school. Part one can be read here. A search can retrieve subsequent parts. Since time does bring about changes and developments, I have included some notes in brackets after statements that may no longer hold true, or at least are in need of further enlightening.

In the 1980s Animation and Television are one. Even more so than in the 1970s animation was in the 80s a medium of television, while the animated feature was always a rarity we see in the 80s the complete discontinuation of cinematic shorts and the dominance of half hour animated programs before getting to that there are some important developments in the cinema that need examining.

Walt Disney Studios were my catechism in film. From 1937 to 1995 they were the Notre Dame of film in my eyes and could do no wrong. There is an asterisk, however, and that comes in the 1980s. The films they made were very eclectic in the 80s.

They made some very good films The Fox and the Hound (1981), The Great Mouse Detective (1986) and The Little Mermaid (1989) yet they produced films that I had no interest in seeing as a child and they were Oliver and Company (1988) and The Black Cauldron (1985). Disney went beyond the point of experimentation later on and just got bad on occasion. They’d lost the luster and were not something I looked forward to any longer. [I’ve since filled the 80s gaps in my viewing, and have found newer and older Disney titles I like. My fandom is complicated thing, as I will explore in March.]

If it takes about four years to produce an animated feature film then I estimate the death of Disney films as we knew them in 1991. Which is when they would’ve started working on Pocahontas and Mulan the first two Disney films I consciously avoided and then they released the terrible Hercules and it was over. The only quality they can come up with now is through collaboration with Pixar and through use of computer animation. [This too has changed since this writing and the introduction of Walt Disney Animation Studios, which focuses more on traditional techniques.]

Not that there was anything wrong with the Disney of the 1980s, oddly their best film of the period may have been The Brave Little Toaster in 1987 but one of the best things the 80s brought us was a legitimate alternative American feature length animation film for the first time since Max Fleischer’s Gulliver’s Travels.

One of the very best films ever made has got to be Who Framed Roger Rabbit. It took the technology from Bedknobs and Broomsticks to the nth degree. Not only that but it’s one of the most entertaining and delightful films I’ve eve been witness to and it’s nearly miraculous that Spielberg was able to pull it all together. What makes Who Framed Roger Rabbit truly a great film of the 80s cinema is how we see the cartoon characters. This probably has more resonance with people who saw this film as children because, in essence, what the film is doing is rounding out these characters, if not that adding dimension at least. Whereas in shorts we knew what Bugs Bunny was going to say and how Daffy would respond. Here we saw them in different situations and in a new light. It’s something kids do all the time: take characters that have existing attributes, stories, etc. and put them in new ones either just in their own imagination or with the aid of action figures. This makes it such a rich and pleasing cinematic experience. While as children get to bask in whimsical awe that all these characters we never saw interact are running around together (Donald and Daffy) we also get wrapped up in the mystery and it becomes very suspenseful. For adults the opposite effect must be true the suspense and plot keep you in it and the cartoon characters take you back in time, making this a unique experience for all who see it. It is truly a gem of the 80s which was hailed as a ‘landmark’ at the time but hasn’t had much said about it since. Spielberg attempted to make Roger a new star of shorts but the logistics probably got in the way and only a few were made, however, Spielberg has continued to work with animation making the all computer animation Shrek, yet another breakthrough and creating such television series as Tiny Toons Adventures, Anamaniacs, Freakazoid! and Histeria. 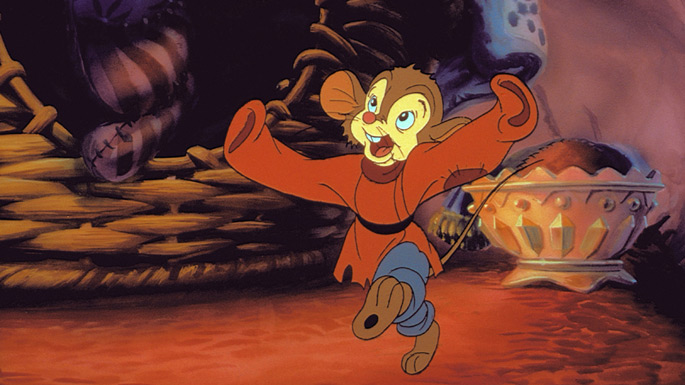 Aside from Spielberg’s efforts the 80s has produced another animation specialist named Don Bluth:

“Don Bluth was one of the chief animators at Disney to come to the mantle after the great one’s death. He eventually became the animation director for such films as The Rescuers (1977) and Pete’s Dragon (1977). Unfortunately, the quality of animation that Disney was producing at this point was not up to par with the great works of Disney, and there was rumor that the production unit at Disney might be shut down indefinitely. In retaliation, Bluth and several other animators led a walkout, and went off to form their own independent animation firm.”

Bluth’s story is one of those twenty-years-in-the-business-overnight-success-stories. In 1982 he released his first film The Secret of NIHM and it was a success. In fact, he didn’t have a bust in the 80s following that up with An American Tail, The Land Before Time and All Dogs Go to Heaven. While he’s never been on a Disney-like scale he has made quality films and continues to make his own works. As a businessman and a producer, he’s never said no to a sequel. God knows how many Land Before Time films there are now but he does have his standards as a director and his most recent animated sci-fi adventure Titan A.E. received sharply mixed reviews.

Animation is definitely now the domain of television. [Obviously this no longer holds as animated features now come from all studios and have spawned an Academy Award category all their own.] The short which used to be on before a feature film, is now paired with two other shorts and called a television show. The stage for this change was set in the 1980s as we will see in the television section.