Warning: This post features in depth story analysis, which includes spoilers. If you have not seen this film proceed at your own risk or not at all.

This film was the catalyst for this paper. I think what I admire above all else in filmmaking is bravery and I think it was very risky to make this film. This is an idealistic fairy tale about global nuclear disarmament and of political martyrdom. David Field, writer, and Mike Newell, director, knew no fear in making this film, there was no ceiling for how far it could go. While it’s an outlandish tale, it admits as such, and gives it even more redeeming value in the process.

The film very early on inserts a title stating “Once Upon A Time There was a Boy…” it’s a fairy tale, for some reason some Americans just cannot comprehend that a fairy tale can be depicted in a live action film. What we have in this film is a grassroots movement. A boy, Chuck Murdock (Joshua Zuehlke), is taken on a field trip to a missile silo one day. The kids are shown an actual missile, Chuck is the only one who questions its existence and is also very frightened because his father is in the Air Force. After the trip the Congressman who led them around pulls him aside and tells him “That missile will never be used, that’s why it was built,” it’s that kind of thinking that got us in an arms race stockpile and made us want to scare the other guy into not using their weapons. That night Chuck has a nightmare that he is caught at the silo during a nuclear attack.

The next day when he gets on the pitcher’s mound he decides to quit baseball. He states it’s “his best thing,” and no one understands why their star pitcher walked off the field. Then he explains that he won’t play baseball again until there are no more nuclear weapons. 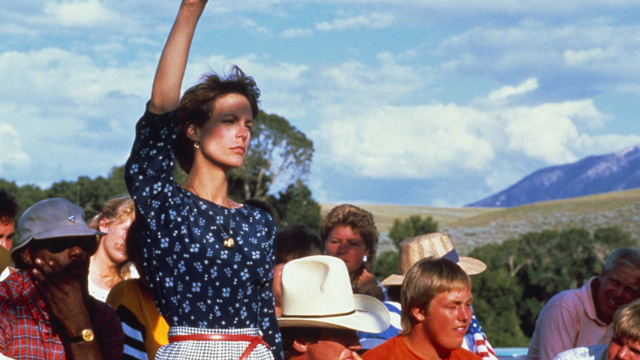 The other protagonist of this film is a professional basketball player nicknamed “Amazing Grace” Smith, played by Alex English who was a player for the Denver Nuggets at the time this film was produced. We see him playing, hit a three-point shot and give his famous three fingers in the air gesture, after the game his agent/best friend, Lynn (Jaime Lee Curtis) reads him an article about Chuck and the wheels start spinning.

With the memory of his wife and daughter gnawing at his mind, Amazing decides to quit basketball and do like Chuck did, an official protest has begun. At one point someone asks Amazing “Do you really think you’re going to bring an end to nuclear weapons?” Amazing turns to him and says “I don’t know but wouldn’t it be nice.” This soon starts a snowball effect and so many athletes join the cause that professional sports are crippled and the movement spreads worldwide. So leftist is this film that Ted Turner was a consultant and used this film to promote CNN with many news reports in the film brandishing their logo.

The protest continues and gains national recognition. Chuck meets with the president and he eventually proposes that the Americans and Russians will disarm within seven years but this plan is rejected because the President (Gregory Peck) might not be in office by then. The protest causes problems between Chuck and his father and Amazing Grace starts getting anonymous phone calls. A powerful businessman, who has been threatening Amazing Grace, tricks him into getting on one of his planes and then he blows it up. Following Amazing Grace’s death Chuck vows not to talk anymore and this movement sweeps across the world and forces another meeting between the Russian Premier and the President. 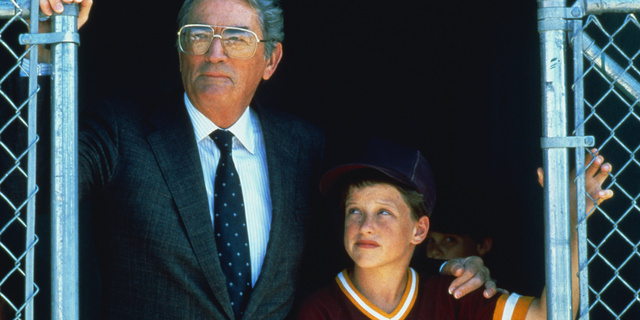 We see them meeting at people in Montana in a cabin just a few miles from Chuck’s home. The President opens by saying “Are your grandchildren talking to you?” the Premier laughs and says “No.” Then they talk about how troubling it is that they’re losing their children. And ultimately this is what the disarmament would be for: so they don’t lose their children. They agree on total nuclear disarmament immediately. And, of course, the president goes to visit Chuck and thanks him.

Now a lot happens in these two hours and it all ends with Chuck stepping back up on the mound. The Russian Premier is there, so’s the President. The catcher starts to give him signs he shakes off the fastball one, and the curve two, and then he turns to the crowd and makes the three-point gesture. And every one stands and repeats the gesture, yeah it’s been done to death but in this film it all works. Chuck looks up to the heavens when he’s poised and says a word to Amazing, he throws the pitch and we follow the ball in close shot as it spins through the sky and cut to black and then there’s a title it reads:

“But wouldn’t it be nice.”
-Amazing Grace Smith 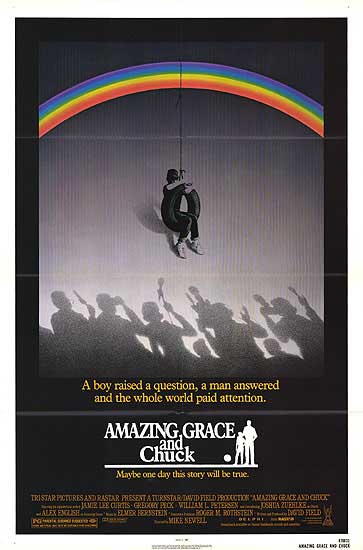 This is a film that is idealist and dares to dream. It takes the fears of Three Mile Island and Chernobyl and combines them with the hope of Glasnost and presented us with a fantasy. The poster for this film should tell you it’s a fantasy. And it’s one that only could have come out of the 80s, this film literally drips 80s. In the 1990s, and especially in the present, disarmament was the furthest thing from anyone’s mind. It’s a great film about one person can make a difference and a film with a message.