The Criterion Collection packaged two of the most influential short films of all time on one great, yet stripped-down DVD package. They are both written and directed by the same man, Albert Lamorisse. Both are the recipients of many awards and have quite a few narrative similarities and as such they make great companion pieces.

White Mane, which is shot in stunning black and white with magnificent vistas of the French countryside, Camargue, is a modified tale of a boy and his horse. In this scenario, however, the horse is wild and the boy, whose intentions are pure, wants to keep the horse, whereas the Ranchers seek to only do it harm. It ends in a similar fashion to The Red Balloon except in a somewhat more bittersweet fashion as opposed to the whimsy of the other.

There are some brilliant dissolves in the film and while there is occasional dialogue it is for all intents and purposes a silent film as is The Red Balloon.

The second film in this collection is without a doubt the more well known. As a short it won an Academy Award for Best Screenplay in open competition against Hollywood features in 1956. This was a film that conquered the world both literally and figuratively. Yet it drew sharp criticism from one of cinema’s finest critics at the time and later one of its great filmmakers, Francois Truffaut. 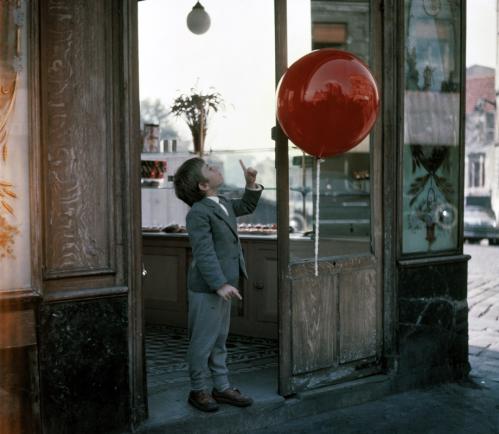 Writing for Les Cahiers du Cinema at the time Truffaut literally tore the film to shreds. Rather than regurgitating his entire article point for point let us summarize: Truffaut found the personification of the balloon to be its unpardonable sin. Where Truffaut was coming from was being one who preferred the fables of La Fontaine as opposed to the films of Disney. La Fontaine told the tales about animals without making them speak, without humanizing them in any way and what he felt Lamorisse had done was fall into the schmaltz of Disney.

It is certainly conceivable how one can see this as a problem; however, the opposite view is the one I take. It takes little to fascinate and delight a child and considering that this child is alone most of the time there is the possibility of skewed perspective. It is a simple tale about a child’s delight and is told simply such that we connect. Had it been something other than a balloon it might not have worked but it does. There’s just something primal about it and many do connect with the Disney style, just as the man himself once said: “All right. I’m corny. But I think there’s just about a-hundred-and-forty-million people in this country that are just as corny as I am.”

While each one of these has a very small moment that makes you scratch your head somewhat, a moment which will not be revealed here, both are well worth your while – especially The Red Balloon. They are both fascinating and despite similarities they are their own works with their own distinct approaches to shooting and the edit aside from the obvious fact that one is sleekly shot in black and white and the other in shot in the unparalleled lusciousness of three-strip Technicolor.