Seeing as how I typically partake in writing about and seeing many TCM selections for 31 Days of Oscar, I’m thrilled to also join a 31 Days of Oscar blogathon discussing four unusual topics: Non-competitive, non-lifetime wins (e.g. Charles Chaplin “The Circus), Defunct Categories (e.g. Title Writing), Cinematographers in Black & White and Color, and those Who Won as Directors Not as Actors. Can’t wait!

Once upon a screen...

“Oscar and I have something in common. Oscar first came to the Hollywood scene in 1928. So did I. We’re both a little weather-beaten, but we’re still here and plan to be around for a whole lot longer.”
– John Wayne

Continuing an Oscars tradition – albeit a much newer one than either the legendary awards or Mr. Wayne’s impressive career – Kellee (@IrishJayHawk66) of Outspoken and Freckled, Paula (@Paula_Guthat) of Paula’s Cinema Club and Aurora (@CitizenScreen) of Once Upon a Screen are back for the third annual 31 Days of Oscar Blogathon. 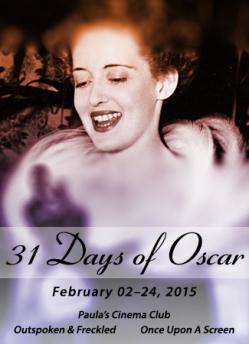 We started this event to coincide with Turner Classic Movie’s (TCM) 31 Days of Oscar marathon during which the network shines the spotlight on the storied history of the Academy Awards.

This February promises to be another stellar programming month for TCM, a month filled with fabulous tales and screen wonders –…

This is the same idea as “Favorite Older Films First Viewed in” which I did since 2011. The idea was one I first saw on Rupert Pupkin Speaks. I have usually done the list in parts. This time I will find ways to group the films. I noticed I had four short films that are available to view online so I figured I’d start with them.

I only recently discovered the works of Segundo de Chomon. He seems a worthy Spanish counterpart to Georges Méliès. This is a presentational, magic style of silent film implementing many invisible cuts, but it is very enjoyable.

Many thanks to Fritzi over at Movies, Silently for suggesting this film when I wanted a wedding-themed silent. I was unfamiliar with Charley Case before viewing this film, and look forward to seeing more. It’s quite funny. Enjoy!

This is a selection that is fitting not only in light of Mickey Rooney‘s recent passing, but it also plays into my Poverty Row April theme.

This is purportedly the last of the series of Mickey McGuire shorts (back when Rooney was credited as such) that he starred in while not signed with a major studio. The story is simple escapist fare and fairly humorous. It’s more noteworthy because I had not yet seen one of these shorts. Enjoy!

I when watching this film preferred to take a textual approach rather than a subtextual one. Regardless, it’s one of the most impressive pieces of first-“person” perspectives I’ve seen. For more of a read and more of a background on this film check the post on The Dissolve that drew this piece to my attention.