This is part five of a series on the Jurassic Park franchise and the second post on Jurassic World.

Yes, this is an incredibly dated reference being used to introduce one of the largest talking points in the film namely Bryce Dallas Howard’s footwear. However, I feel that in chiming in so late I had to try to separate myself from the pack, so why not try a now very old reference?

Anyway, I must confess that when Claire is doing her preparation routine, that initially confounded me as much as it did Owen, I did think removal of her heels would be part of that ritual. When that never happened I interpreted it as a calculated effort. Now that’s one that may not have been balanced well with how Owen was perceived, and the drawing of Claire, and Howard’s intepretation, but it’s one I kind of let go.

That interpretation seems echoed here. However, it’s not something I can say I feel passionately about. I see the points being made in various places, especially when the woman who I’d declare the biggest fan of Jurassic World referenced it as being ‘stupid.’

I do wish there was this kind of impassioned debate and analysis of every film, but apparently even in the age of over-saturated Internet and social media coverage only films that cross the obscene one-billion-dollar threshold get this kind of magnifying glass such that even though the Pachycephalosaurus was introduced to the series in The Lost World and referred to as “Pachies” then, it only garners attention now. And, honestly, with Jurassic World, the park, being such a large corporate entity concerned with bringing on sponsorships, referring to their animals as assets, you’d think easily misconstrued or potentially offensive nicknames would be verboten.

So that’s not bending to the overly-PC slant most blockbusters have to adhere to but rather just acknowledging a reality in a large company.

Introduction: The Myth of Binary Reality 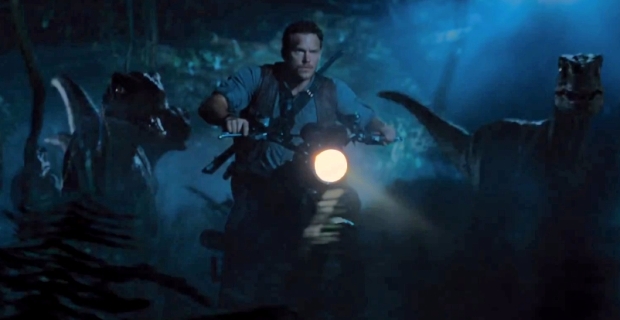 So through the first two sections I acknowledged some issues, and mixed results in the film. So, how can I defend liking this film? Easily. Firstly, because defense of a film is defending an overall intention and design, and not saying its flawless or perfect. One of drawbacks of the knee-jerk, vitriolic, online debate machine is that it forces us into a binary interpretation of reality, specifically art. A film is either awesome or it sucks; perfect or worthless; you’re either a hopeless tool who gobbles up Comic Con news or a worthless hipster who only attends arthouse films you half-understand. This kind of zero-sum approach to things is so disadvantageous to all involved. I like to pride myself on balance. I think my BAM Awards and Best of Lists are testaments to that, I constantly try to buck trends: tentpoles and obscure artpieces can be on my best of lists; so can horror films and horror performances; a performance can be great even if a film isn’t; and so on. Especially in this age where audiences, both casual viewers and film buffs, have so many avenues to see so many kinds of films there’s less reason than ever to be self-limiting. No longer are we as viewers confined by the entertainment fishbowl created by the partnership of major studios and theater owners.

The last paragraph is a roundabout way of saying no film is perfect, perfection is a myth. One story I embrace from film school was when a professor of mine asked Robert Wise about cutting Citizen Kane, which he stated at the time was perfect. Wise instantly replied that he should’ve cut a little more coming out of the butler’s flashback. The pause is too long. And it is.

Disavowing perfection, and showing what a sham a binary reality is I can begin to talk about what it is in this film that I enjoy.

Being the first film in the series in fourteen years, nostalgia will play a part for those who have “been there from the beginning,” so references are inevitable. There is a valid debate to be had about the excessiveness of fan service in film in general, but in Jurassic World I feel it’s one of the home run elements in a universal regard, and to me personally.

The T-Rex is introduced in this film with a familiar motif and new window dressing. We see a flare and a braying goat. The enclosure allows curious park-goers a very close, supposedly safe glimpse of the beast feeding.

Granted the predator or scavenger debate is one that rages, and is even addressed in a Jurassic World branded children’s book on dinosaurs, but cinematically he has to be a hunter. The Tyrannosaurus Rex has incontrovertible star power and in the popular imagination captures so much about what has fascinated so many about dinosaurs since their discovery in the 1800s.

The most obvious one is the discovery of the old park and its paraphernalia, starting with the Jeeps. Is it likely that the island was abandoned for years and left to overgrow, it could’ve happened. Is it likely those edifices would be left standing after it started getting redeveloped? No. It’s certainly an expense spared. Am I glad it was there anyway, and did I think it was awesome? You be your butt (the one you’re to be holding on to).

Yes, “Spare no expense” is cited. If you take that overly-literally then Masrani should’ve just shot a warhead at the Indominus and gone back to the drawing board $26 million dollars or not, but then there’d be no movie. Genetic engineering in cinematic terms is something that has happened and not something we want to see. Much in the way Masrani was not interested in how the Indominus was made until it was killing people. “You just asked for more teeth.”

Speaking of more teeth, I still absolutely love the fact that the Mosasaur feeds on a great white shark. It’s an obvious Jaws allusion, but it also is great to illustrate the size of the Mosasaur and what fearsome predators they must’ve been when they can dwarf, and swallow whole, the present day version of nature’s most perfect eating machine.

Jurassic World also uses these allusions as a tool to introduce some subtext. On his desk, aside from the dinosaur figures, Lowery also has a copy of Dr. Malcolm’s book God Creates Dinosaurs. It’s a not-so-subtle reminder of the lack of humility being shown but it’s still appreciated.

Some of this fan service I will admit I can only rightly construe as being of service to me. Which means that I enjoyed certain aspects and outcomes due to the tendentious proclivities.

Among these things is the climactic battle. The reason I mention this is not only the team-up aspect, which I will admit can be seen as a tiresome trope, but not only does it hearken back to the high climax of the first film, and bring “more” into the equation than previous films, it also has a battle between dinosaurs who are “more natural” against the Indominus “more synthetic.”

The battle is staged in such a way that it got very close to doing what I hoped it wouldn’t, killing the T-Rex. In the interest of full disclosure I have several issues with the original King Kong. One of them being that this is a world where apropos of nothing dinosaurs not only still exist but this massive primate can kill them fairly easily. That’s just inanely dumb in my estimation, combine that with incessant atonal screaming that somehow passes not only as acting but the “best acting” and you get the bulk of my gripe. 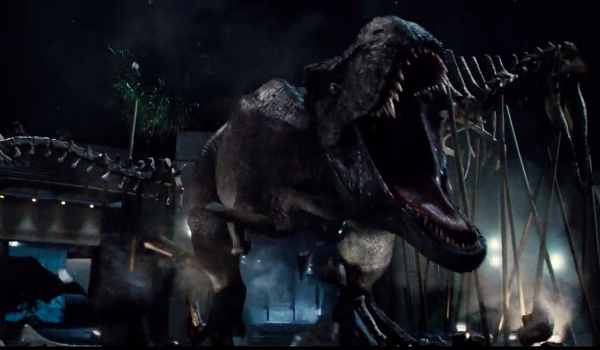 Jurassic World not only doesn’t play that game but it gives us the T-Rex moments we’ve been waiting for, but still introduces a new heroic figure. The T-Rex’s entrance is great and helped by the fact that I didn’t quite grasp the “more teeth” line at first, but when I heard “Paddock 9” I knew, and it was a big part of the making-me-feel-like-a-kid-again effect. I was so psyched for the ending it was insane.

The new heroic figure is the Mosasaur, which is a great touch. I have often wondered why it is that the that the oceanic species of the same age get so little press and love. If you truly want some of the most terrifying leviathans of all time you go below the water in the Mesozoic era. If there is a wholly sub-marine tale I’d willing see or write it’d be that one.

Clearly, allusions and fan service, whether fulfilling the desires of a majority or just one individual, are not enough to give a film legs it can stand one. In many ways it is like icing on the cake though and can make everything that much better.

This series will continue tomorrow with Part 6: Building a Better Dinosaur.

As I tweeted immediately after seeing The Dynamiter, it seems to be par for the course that every year there will be a Film Movement selection that will slowly, subtly work on me and leave me bawling nearly uncontrollably, and almost unbeknownst to myself, by the end. Last year’s film was A Screaming Man. What both films share in common is a simple tale of people with simple desires, facing seemingly mammoth obstacles to overcome and struggling mightily against them.

Yet, even that congratulatory paragraph doesn’t really do this film justice. For the magic this film weaves, it creates in a mere 73 minutes. It’s a running time so brisk you’d never imagine it’d have the power in its finale to sneak up on you, but it does.

In writing up any sort of reaction piece to a film, I am somewhat loathe to quote other works, be they literary or musical, to echo my sentiments. However, that’s really more a writer’s pride than anything because sometimes, with the really good films, they are more accurate. One such work is a spoiler so I’ll avoid it, leaving just one: this film does indeed seem to have “The Invisible Touch,” it takes control and slowly tears you apart.

It’s a film that’s deserving of a re-screening and a bigger write-up, but something tells me I’ll be writing about it again at the end of the year*.

* I did write about it at the end of that year, here.