Birds of Passage tells a story that in synopsis, and in the trailer appears to be quite charming. The set-up is a simple one: Cathy (Clarisse Djuroski) receives a duck egg from her father (Alain Eloy) for her tenth birthday. The duckling imprints on her friend Margaux (Léa Warny) as its mother. Margaux is disabled, and wheelchair-bound so her parents do not think she can keep the duckling. Cathy and Margaux are then determined to find a way for her to care for the duckling at all costs.

This is a very simple, and straight forward story, which is always very refreshing. However, in a tale with so few sections where a single decision by a character can send it off the rails, it almost always veers off course, at least for the time being, and the total effect is irreparable to the end product.

In key moments there is a certain obtuseness to some of the characters that is hard to abide. This is not to say that characters, especially children, cannot make mistakes, it’s the how and when, combined with the predictably of the mistake or odd decision that ultimately makes this one hard to latch on to. 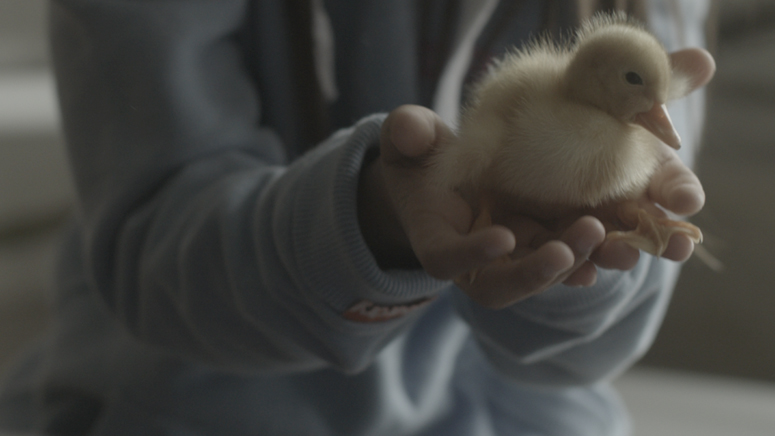 On positive notes: this film is a prime example of the importance of the first image we see, this one being a static shot of swans on a pond as the credits roll over it. There is a symmetry here, and a visual coming-of-age that is apparent and easy to admire. There is also throughout a reconciliation without speaking that is refreshing.

However, this brings us to yet another difficulty. In this film there are four parents, only one of whom is tolerable, in fact, he’s my favorite character. In coming-of-age tales individuation and parents being seen as a barrier is a natural state of affairs, but something’s off when the thought occurs to you “With parents like this who needs enemies?”

The young leads perform admirably, and the very close of the film, and occasional comic relief are nice but ultimately do not salvage the film. This is a film that should be a slam dunk: kids, one disabled, taking a road trip to not just save their duck from becoming pâté but so that it surrogate mother can usher it to its own independence (and their own), yet the whole thing becomes an example of how to take easily identifiable and watchable characters and situations utterly intolerable.