As promised in the BAM Award Nominations, this is a list of all the titles that were eligible. Below that you will see a total and a breakdown of what the top x films represent percentage-wise.

The easy question to ask is: “why do a list at all when you already have an awards slate on your site?” It’s a good question and I finally may have formulated the best response to it yet. Basically, it’s a less comparative discussion on each film that you feel marked the year fro you. In writing a list you discuss each film and a only every few numbers or so get bogged down in discussing placement.

As wonderful a dramatic device as an interrogation is, it’s hard to have a bulk of your film in that milieu and have it work this well. To do so you need mainly two things: a great hook and a great cast. This film has both.

This film contains one of the slyest, most telling pieces of foreshadowing I’ve seen in some time. I won’t give it away, but as I reflected on this film it seemed to me to be a modern, Israeli-set version of A Few Good Men. The drama is more intimate and behind closed doors, but what the film is about is the people and how they react in a given set of circumstances rather than what the consequences for said action is. The comments both societal and militaristic have been made and the story is at an end. The outside world may never feel any ramifications or repercussions from what occurred, but those behind said closed doors do.

What director Sharon Bar-Ziv achieves is an intimate tale not only in terms of the number of participants but also in the frame. There are many times where there is scarcely background to be spoken of as two faces, within very close proximity to one another, dominate our view. Their is an intense focus on the characters studying one another and we in turn study them and not only how they react to one another but also what they are saying.

For a film of this nature to achieve maximum effectiveness it needs great acting and it gets that from its three main players: Asia Naifeld, Guy Kapulnik and Udi Persi. Neifeld plays Anna the Military Police interrogator at the center of virtually every scene and her performance is a veritable tour de force. Her choices as an actress are as clear as the convictions of her character and really help bring this film home. It’s a fascinating tale that is worth your time as it really and truly engages you.

One way in which it was easy to gauge whether or not a film was Best of the Year material was not only the score alone, but if I set out to just write a mini-review on it and ended up writing a full feature instead. A few of the titles in this section of the list fall into that category.

This first film was one of my top posts of the year and a rare DVD review. Here’s an excerpt of the section wherein I discuss the film:

The film has a very basic synopsis and I will not elaborate much at all on that here. It’s likely better that you go in knowing that much or less about this film. Straight A’s really caught me by surprise as a refreshing, character-driven family dramedy, that doesn’t get bogged down in the histrionics that are potential pitfalls of a film with a synopsis such as this one.

I will readily admit that I just may have a soft spot for family dramedies. However, the recent film in the subgenre that comes to mind for me is Fireflies in the Garden, and that film pushes its melodramatic limits, whereas there is a fairly realistic grounding to be found here. Characters’ motivations and reactions make sense, things are played up as much as they need to be and are still fairly effective. While the overtures of external conflict are apparent, there is also a lot inner-turmoil that the film is wise enough to hold the reins on, and allow some disputes to be settled sub-textually rather than textually.

There’s quite a bit to like in the performances, and the film itself. Not only is it a first quarter of 2013 release, that made it more likely to fly under the radar anyway, but it was one that didn’t have much fanfare at the time that is worth discovering. 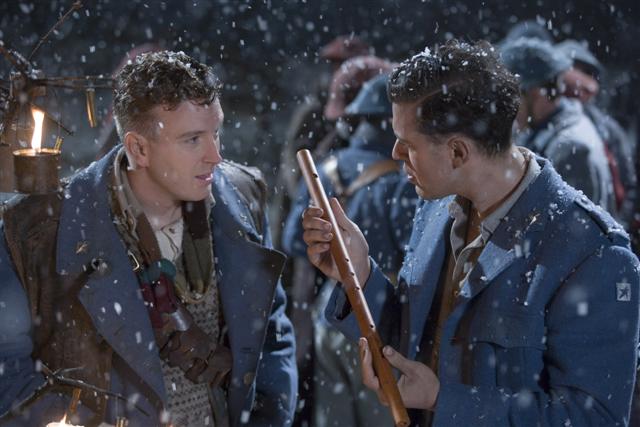 On occasion, actually more often than not, a film being shelved an unreleased for a while has nothing to do with its quality or lack thereof. Usually, it’s a business decision. In fact, there’s an Italian Job sequel that’s so inadvertently similar to one of the Fast & Furious movies it appears to have been permanently shelved.

Seven years after its production Kenneth Branagh’s version of The Magic Flute, the only opera I can claim to have any sort of knowledge of, came to light. It inspired me to write about my history with the artform on film and here’s the section about the film in particular:

What Branagh does with this film is not that unlike what many have done with Shakespeare: the text is the same albeit translated and the setting is updated. This tale taking place during World War I.

Branagh’s doing this makes perfect sense when you consider that most are familiar with him through his Shakespearean adaptations. However, this film is perhaps the best assimilation of his sensibilities: there’s the classical dramatic sensibility he’s familiar with in Shakespeare and parlayed well in Thor, but also a zany, irreverent humor that he possesses as he’s shown as an actor in the Harry Potter series that fit this film as well.

Being an opera on film it will invariably have its stagier moments, but it has infinitely more cinematic ones. The camera, and at times even the characters in motion, accompany the movements of the music. This is especially true in the “Queen of the Night Aria” which is as mind-blowing cinematically as it is musically in this version.

In short, after all prior re-introductions to opera on film are taken into consideration the Looney Tunes are a wonderful warm up, but Kenneth Branagh’s The Magic Flute is the perfect introduction to opera for the uninitiated.

This is also a film that was to be a mini-review and grew, also from earlier in the year, and like the title below it deals with sports ostensibly but there’s a little more to it than that.

With a film such as Allez, Eddy! there are with its various components, which prescribe certain plot points and confrontations. However, what is unique about the film is the handling of said situations, not necessarily the situations themselves. Also, adding to the distinctive palate of the film is the combination of these situations.

To be a bit more specific, in this film you have: the tradition vs. advancement plot of the family-owned butcher shop versus the new supermarket, which in the setting of this tale is a new concept in an of itself. Then you also have the underdog sports story of a kid who comes out of nowhere to shock his hometown in emulation of his hero. Intermingled with those concepts is a family drama, but lastly you have the tale of an isolated child. The cause of his isolation is a malady that could be the cause for much potty humor, but is for the most part handled deftly and delicately. Already upon combining these things you can see this film is anything but run-of-the-mill.

All those items are tethered to one another so there’s no feeling of the film being disjointed as there is a unity to it all; a common thread. There are other subplots that could be touched upon, but its better that those be discovered in the film. Aside from their connection what makes the handling of these themes and plots unique is that things don’t always turn out as you expect or occur when you expect. The film sets you up believing there will be a clichéd climax or sequence and pulls a reverse on you at the last second.

This was another review that ballooned, and believe me it was one of the more pleasantly surprising viewings of the past year. Yes, Massanek’s works had shown flashes of this promise and been showcases for young talent in films past, but I had not expected him to latch on to an idea so firmly that it allowed for results such as this:

At its core it’s a sports movie about four kids who are selected to challenge the reigning local go-kart champions, who are one win away from solidifying their place in a mystical castle. However, the myth of that locale, the secretive nature of these races and other things layer on a fantastical element to the story. Whereas Die Wilden Kerle seemed to leapfrog its predominant genre from film to film Masannek here it creating a melange from the get-go and what makes it even more impressive is the naturalistic way in which it occurs. It functions even with these disparate elements, such as being a film designed for kids, but also having its coming-of-age aspects, not unlike The Crocodiles (Vorstadtkrokodile), allows it to work on a few levels.

V8 not only does more juggling of genre elements and themes in kid-centric sports film than say something like Real Steel, but it also is a more sophisticated implementation of Masannek’s style as well as a series starting off on the right foot. As opposed to say the Fast & Furious franchise, which it does tip its hat to. V8 finishes its tale in a very gratifying fashion. How the final outcome is achieved is excellent and there are some good turns in the road along the way. It’s especially worth noting that the race that all the drama lead up to is also very well-executed. The film makes no secret of its intent to set-up a sequel, but it also finishes appropriately. With this as a set-up building quite a fascinating and endearing mythology, I welcome that prospect with open arms and I’m quite sure there are audiences worldwide that would too.

This list continues tomorrow with 20-16. To read the beginning of it go here.