I. History with Him

No matter how well-known a director is one always has to find them as an individual. In the case of Robert Rodriguez I actually started watching his films before Quentin Tarantino’s, who is Rodriguez’ friend and occasional collaborator.

I first saw the Spy Kids films that were out at the time in college. Then I began seeking out more of his work (consciously, but more on that later). As such I saw El Mariachi and read his book Rebel Without a Crew, and as such he became one of the rare directors I not only have read but much of what I learned from his books serves me well until this day.

Not only did his name become part of my personal nomenclature for a director who does it all but some of the philosophies espoused are still ones I can recite, and agree with. Among them being his theory about trying to work on several films immediately after his big success such that there was a bit of uncertainty as to what his second film actually was. The idea being if the public and critical masses didn’t know they couldn’t really chomp at the bit to tear apart number two. 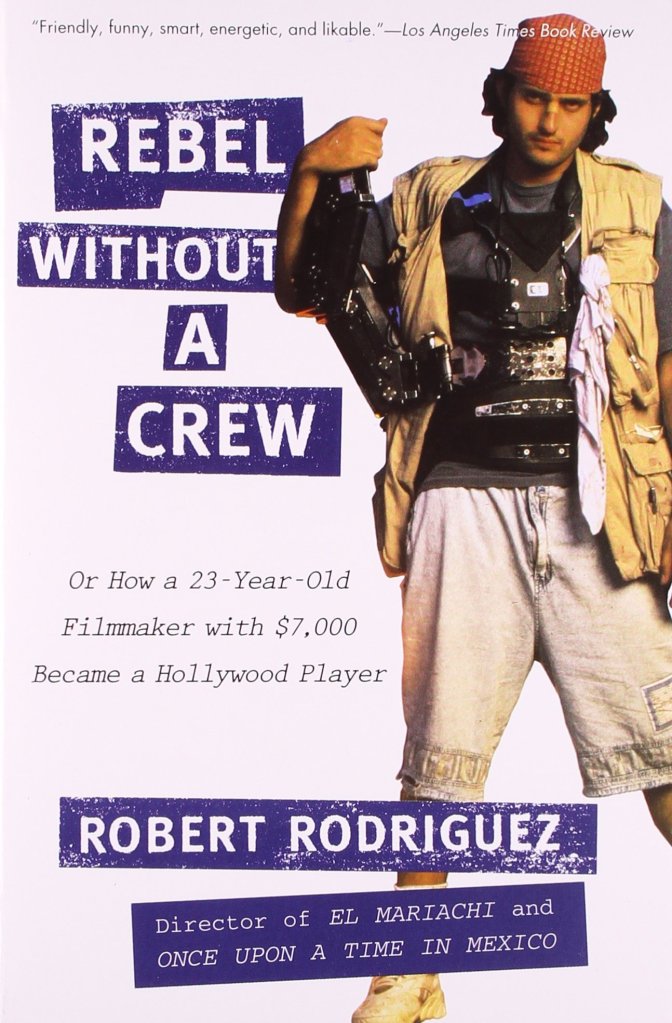 While video cinematography still hasn’t quite approached what cinema can accomplish, I do and did appreciate his being on the vanguard of the digital revolution, and his joke about going to fondle some film stock if you absolutely needed to is still one that tickles me greatly. 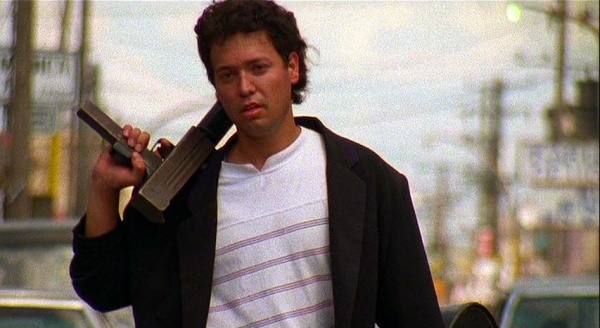 Starting at the very beginning, and picking up where the last section left off, El Mariachi is a sort of cinematic miracle. This is not just because of the budget, the size of the crew or lack thereof, or the fact that it was edited on a VCR and cuts were dictated by when the sound started to run out of sync; but also for the narrative and what Robert Rodriguez did not only while he was essentially an amateur but with a group of them.

There’s a tremendous amount of intuition at work. For example, before this film he had never written a feature-length screenplay, and had no idea how to go about it. He had, however, written shorts running about 30 minutes, he knew how to structure that. Therefore, he repeated that process three times, moving the story along and there was the feature. This is most noticeable in the film in examining the dream sequences, which follows the Rule of Three in a feature form.

El Mariachi proved not only a launchpad for his career but also was one of the franchises that Robert Rodriguez brought into being. Most impressive about this trilogy is that it may (I’ve not formalized this comparison) be the most aesthetically successful trilogy of films wherein the lead actor was recast after the first film.

In the interest of full disclosure the other films that Robert Rodriguez worked on that vied to be his second were one I’ve not seen (Roadracers), believe I’ve only seen partially (Four Rooms), and Desperado, his follow-up to El Mariachi with Antonio Banderas, which in some ways is like a bigger budget remake but does progress the narrative.

IV. Back to School with Bedhead

Later on in my schooling I discovered one of Robert Rodriguez’ student films. One thing I’ve always admired a lot about him is his willingness to share not only early works but also advice. This is one I’ve featured on Short Film Saturday and find quite funny and creative. Give it a look if you haven’t yet.

V. Horror and Sci-Fi: The Faculty From Dusk Till Dawn

Another thing a bit unique about my fandom of Robert Rodriguez is the current alpha and omega in terms of the films of his I’ve seen, they are the two titles discussed in this section. I saw The Faculty during its theatrical release, however, I didn’t know him at the time so it wasn’t an auteur-based decision. It was motivated by the trailer, Elijah Wood’s participation, and Kevin Williamson (at the time I was a high school student and Dawson’s Creek and all his works were a big deal). 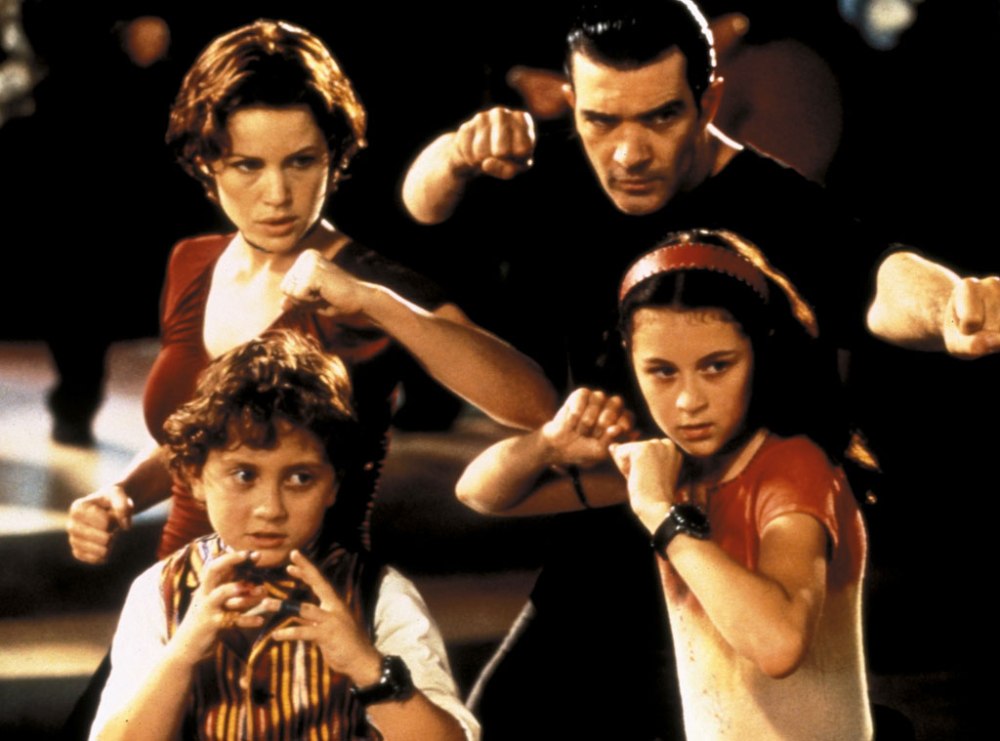 In discussing Robert Rodriguez’ family films there are quite a few to discuss. First and foremost there is the Spy Kids franchise. It’s almost tiresome, but nor unnecessary to state that clearly the progenitor is the best of the series, and earned Best Screenplay and other nominations. Whimsy and imagination are not words I throw around lightly, and exceedingly rare when films fashioned by adults seem to truly capture a child’s imagination. 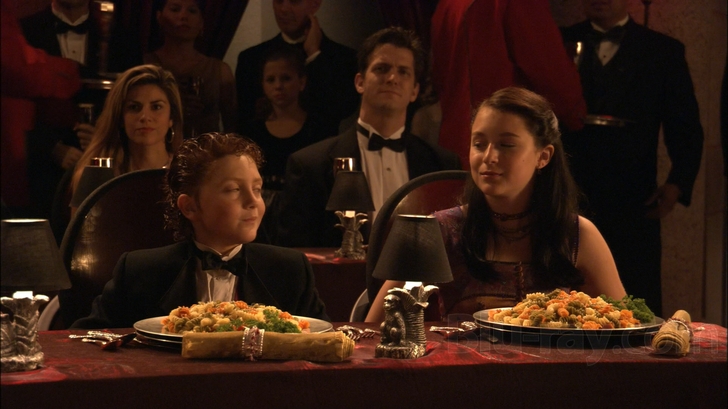 The sequel was also nominated, and while it doesn’t live up to the first, it doesn’t keep the characters in a state of cinematic cryogenesis maturing them as they go. This time Juni (Daryl Sabara) and Carmen (Alexa Vega) have counterparts of the opposite sex (Matthew O’Leary and Emily Osment). The homage to Ray Harryhausen is quite appreciated as well as the reified dreams. 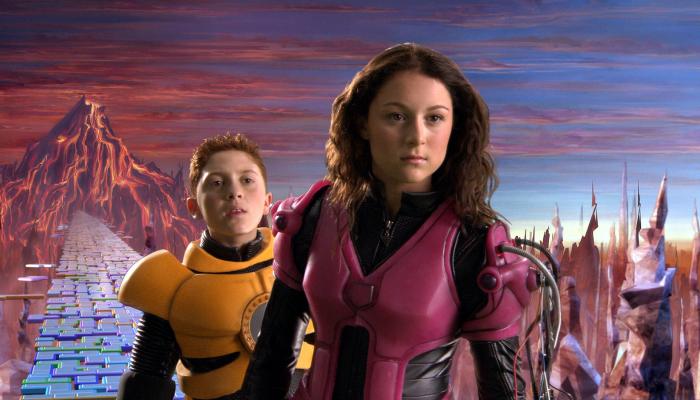 Game Over provided a successful what-was-then-believed to be conclusion to the series, and a good, more modern take on the trope of entering the world of video games. Keeping in line with his vision of moving forward new leads (Mason Cook and Rowan Blanchard) Spy Kids: All The Time in the World in 4-D not only experiments further with Rodriguez’ own ahead-of-the-craze version of 3-D and scratch and sniff cards but tells a tale of families growing up together, as it features the original core in smaller roles, and the continuation and expansion of an institution.

Prior to that newest film in the series, which did not in any way feel superfluous after it was over there were two more sojourns into juvenalia. First, there were The Adventures of Shark Boy and Lavagirl in 3D, starring Cayden Boyd, Taylor Lautner (his screen debut) and Taylor Dooley, which was quite literally of childish imagination as Robert Rodriguez’ then eight-year-old son Racer Max Rodriguez received a story credit.

Then there was Shorts, which I found to be a rather unique updating of the structural concept that drove El Mariachi, it played again with time and youthful notions rather successfully. 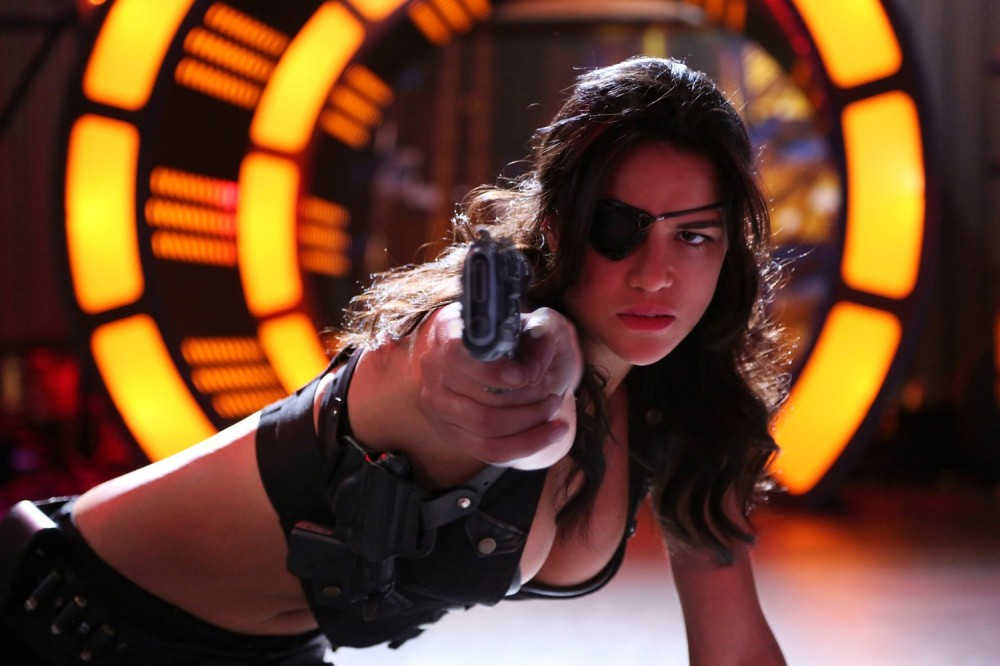 Firstly and most blatantly, I absolutely love that Robert Rodriguez was the first to turn his spoof trailer that was part of his Grindhouse double feature with Tarantino into an actuality. Eli Roth has tinkered with Thankskilling but it has yet to materialize, and I would love to see Edgar Wright’s Don’t but Machete lives in an eponymous film, Machete Kills and the forthcoming Machete Kills in Space. Now if that will complete a trilogy and rest there remains to be seen. However, even though Rodriguez seems to be bouncing from one notion to another that he’s made famous lately, the first in the Machete series is his most recent triumph. 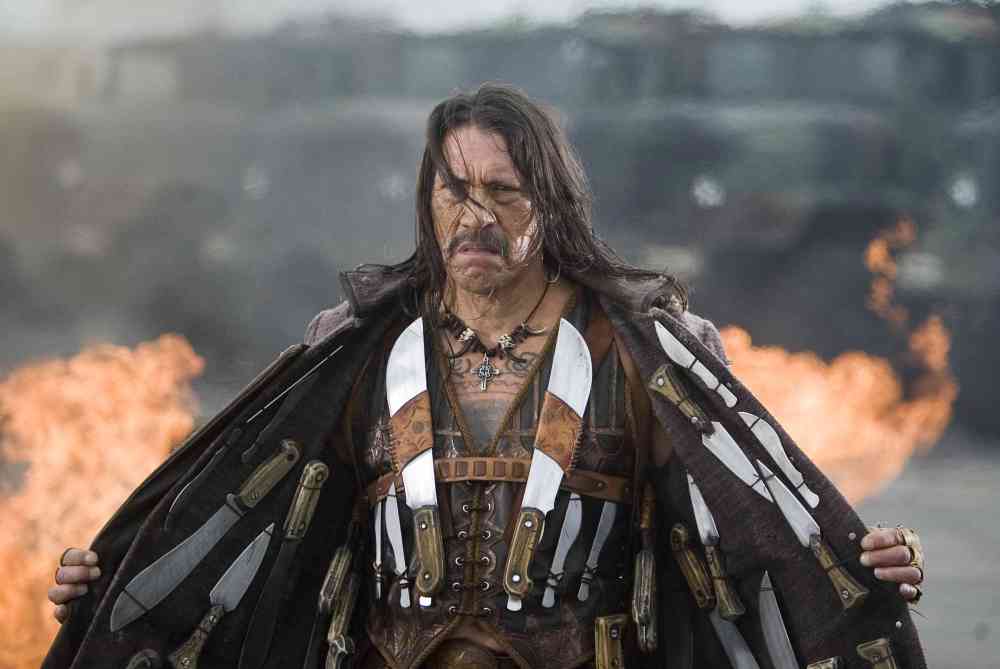 Not only did I land Machete in my Top 10 for 2010 but earned a rare BAM Awards feat (and other award shows also) as it was nominated for Best Picture and in no other categories, but that one is the best one to land in. Furthermore, in a very grindhouse or Italian genre cinema way Danny Trejo is back playing Machete but there is no indication he connects to the world of Spy Kids, but it in all other respects seems to be the same character examined further. 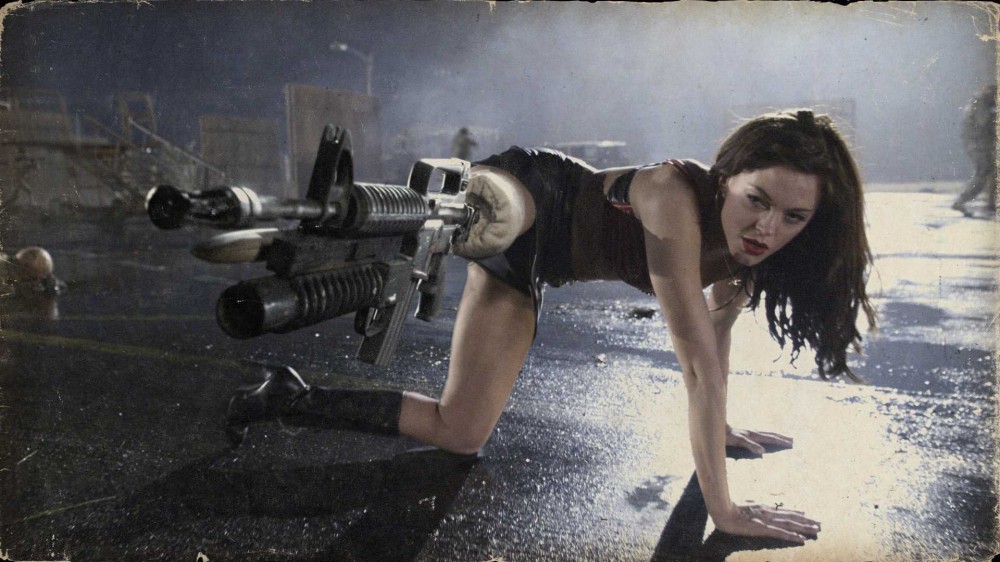 As for Planet Terror, the film he created that lead to Machete. It’s not my favorite part of that double-bill but it is good, holds up its end, and if anything over-commits to the notion of grindhouse in its faux-scratched film, excessive cigarette burns, and missing reels.

Perhaps most noteworthy thing about Sin City is the fact that in continuing his rebellious streak, with due cause, this was the film that caused Robert Rodriguez to part ways with the DGA. The reason was that the Guild would no allow Rodriguez to co-direct with both Frank Miller and Quentin Tarantino. Under DGA rules only blood relations can co-direct a DGA film. So he dropped out of the Guild.

At it’s time I really liked Sin City quite a great deal and gave it a 9/10. It was in the state-of-the-art at the time, quite visually alluring, and one of the best approximation of the graphic novel in cinema. This proved to create an anachronistic fascination in the film when combined with the Film Noir styling.

I have yet to view the recent sequel because it took too long to follow-up, I admit to some comic book film fatigue, which was not a phrase that made sense in 2005, and until I sat down to write this all I recalled about the original was the excessive, in a perhaps too true to the style and source material, voice over narration. Watching the films of Robert Rodriguez, whether they be kids films or his action or other adult content ones, was also part of my personal maturation process. Prior to having seen his works I was not one for cultural transliteration. To be abundantly clear what I mean to say with this is that his films, though not about my background (being a dual citizen of the United States and Brazil), I could relate. Going just beyond being a necessary and representative voice for his own people Mr. Rodriguez was the catalyst of a sort of cultural awakening for me.

Surely, his films won’t undo the laments and wrongs I bemoan in the pre-amble of my review of Rio (Nothing can), but his films; epitomized by the line from Spy Kids quoted above – strike a universality that is not accessible only to Mexicans, not only to Latinos but to everyone who chooses to watch his films. Since then that specificity combined with universality has been something I’ve sought and found in many corners of world cinema. However, there was a realization I found here and for that alone he earned a special place in my pantheon separate from all his other accomplishments.
X. El Rey del Futuro

Unfortunately, due to my cable and streaming services at current, El Rey is not available to me all the time. However, I plan to check out the From Dusk Till Dawn series soon, and whatever other content is available online. Hopefully, The Director’s Chair, too. Not many directors have a whole network, much less one that represent their cinematic interests so well.

As if that wasn’t enough, besides the aforementioned Machete follow-up, Rodriguez has also been tapped to bring Johnny Quest to the big screen, which if it finally happens should be a big deal and it’s significant because it’s a rare occasion where he is working with characters not of his making.

Robert Rodiguez’ rise not only came at a time when independent cinema was getting noticed more but also during a new crest in the rise of Latino culture in America. Robert Rodriguez seeks always to entertain first and he has; he is his own voice and doesn’t deal with issue films except how they might make sense within his wheelhouse, like Machete (“This time they fucked with the wrong, Mexican” the voice-over states).

Wherever Robert Rodriguez goes I’d willingly follow to give a chance and a glance, as will others I presume, and along the way he’ll open hearts and minds and accelerate pulses with action, but also not be averse to provoking some thought while having fun in the process. He’s truly well-rounded in all regards. I could go on in this, as I hope he shall in cinema; quite nearly forever.