Each year, I try and improve the site, and also try to find a new an hopefully creative and fun way to countdown to the unveiling of the year’s BAM Awards. Last year, I posted most of the BAM nominee and winner lists. However, when I picked Django Unchained as the Best Picture of 2012 I then realized I had recent winner with no write-ups. I soon corrected that by translating a post and writing a series of my own. The thought was all films honored as Best Picture should have at least one piece dedicated to them. So I will through the month of December be posting write-ups on past winners.

This may prove, by the end of this retrospective, to be the one and only film I had to go back and watch over again. As I dusted off my ancient VHS I first realized that I’ve never seen this film in its proper aspect ratio, but rather have only in pan & scan. It’s sort of a testament to how old this film is by now, relatively speaking, and how young I was when I saw it. Now, I’m not about double back on this film. Granted it may not retain the luster that some of the Best Pictures I’ve revisited. In fact, some of the “retroactive” BAM Winners that I created (and no longer acknowledge because they weren’t truly picked at year’s end) are much stronger films.

However, this was what started it all. In 1996, I sat there and perhaps for the first time I paid close attention to Awards Season as the nominations were coming out. I was quite young (15) and I was very unaware to the process, critical buzz and the like. Regardless, I needed an outlet to express my opinions. Therefore, with the aid of ticket stubs, and I would suppose the IMDB (as this film was a rental that I had viewed during the year), or maybe even just memory; I started assembling my first nominations. Even back then I refused to bow to release dates and did pick a 1995 title as my favorite film of the year because of my lack of a reasonable chance to see it.

I’ve since gotten a bit more strict about that rule, but the spirit of it remains the same. So being my first Best Picture, from my first award slate (one if I recall correctly had about 25% or less the total eligible titles this year will likely have), sure, there was reticence to revisit it. However, I long since stopped engaging in revisionist history. It’s a snapshot. I still like the film, moreover, I still know exactly what it was that had me respond in so enamored a way then even though the surprise, and to an extent, some of the thrill is gone. 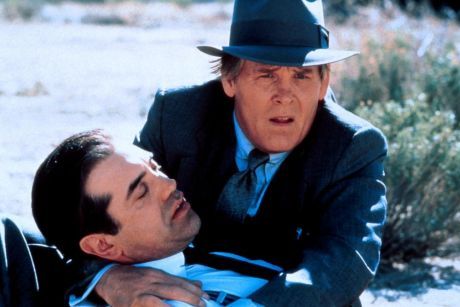 Back then I was far more actor-oriented and there are many in it I tracked closely at the time (Nick Nolte, Melanie Griffith, Chazz Palmentieri, John Malkovich) some I’ve since come to know better (Kyle Chandler, Jennifer Connolly, Treat Williams, Chris Penn, Stephen Baldwin, Ed Lauter). Perhaps more noticeably I realize now that many behind the scenes names are know more well known to me Sally Menke (Editor most known from Tarantino’s works; May she rest in peace), Haskell Wexler (Legendary DP perhaps best known for One Flew Over the Cuckoo’s Nest and Who’s Afraid of Virginia Woolf?) and Lee Tamahori (Director who broke out with Once Were Warriors)

While the film may not be technically a noir tale, its got many of the elements that I was just recently introduced to and starting to become enraptured by so that most definitely captured my imagination. Aside from the titillating aspects, it’s also the multi-pronged plot wherein Hoover (Nolte) was squared off against the the military and FBI in the interests of solving a case that has personal significance for him. He goes rogue, for lack of a better word; and it’s not like he’s a by-the-book kind of guy as the film takes its name from how he and his team deal with the organized crime element in LA. 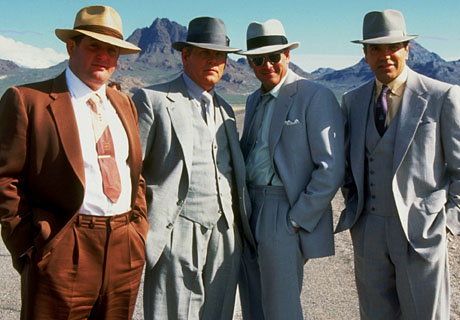 I enjoyed, and still do, many of the performances. And upon revisiting it not only remembered many of the lines I connected with but the line readings (“They brought me a film” as Malkovich says as he’s sick and “You broke my heart” as Melanie Griffith says to close it out; to name a few).

Aside from using film itself as a storytelling element, the narrative also starts with a simple case and opens up into a more complicated, entangled mystery much bigger than the players involved. The professional and personal co-mingle and the characters take justice into their own hands. All these things and more are what I connected to.

In conclusion, it’s not that I regret this choice, as I’ve stated it was most definitely true and correct at the time (and that’s the least you can ask) but it’s one, perhaps the only one, that I feel really dates me. It is still a solid, entertaining mystery that I believe can pack a punch on first-viewing.